A significant investment, but it's still too early to tell if corporate travel has the potential to make any significant comeback this year.

Investors on Thursday threw yet more cash at the travel booking and expense platform. This Series E round follows its $125 million raising in June last year, and tops off an eventful few weeks for several other corporate travel startups.

So far TripActions has secured a total of $790 million, and the company claims it’s now valued at $5 billion, up from $4 billion before the pandemic began.

Its investors must clearly think travel will return this year. Now, TripActions will use some of that money to investigate how, following the platform’s push into expense management in 2020.

To start with, TripActions predicts that travel will grow, due to the remote work effect.

“We have several beliefs. First, there’s something we’re calling the future of work. There will be a lot of work distribution, and that will actually increase travel because teams will need to meet a lot,” said Ariel Cohen, co-founder and CEO.

“You need to have the next generation of what we call group booking, but it’s more sophisticated. Say you have a team: what’s the best place for an offsite meeting from a cost, regulation, Covid and carbon offsetting perspective? We’re doubling down on that.” 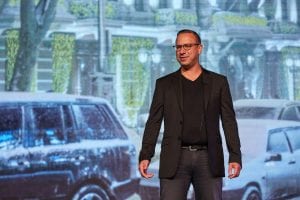 Cohen also wants to keep the momentum going for TripActions Liquid, its virtual card payments product. In October it added an automated expense tool with an eye on rivals like SAP Concur. Instead of flights and hotels being reimbursed, it’s more about software licenses and office equipment.

With many other platforms going down the spend management route, is TripActions turning into another expense software provider?

“I don’t see it as a shift toward expense management, it’s a natural expansion,” Cohen said. “We’ve been developing Liquid for two years. We see this opportunity, and if you want to seize the opportunity, you want to raise money and be more aggressive in the market.”

This bullish attitude also applies to its expansion plans, and it’s actively targeting Europe in a bid to switch bigger “enterprise” organizations away from legacy travel management companies. One London-based travel buyer who was recently in conversation with TripActions told Skift he felt the company wouldn’t be able to handle the size of his travel program.

The European advance is a far cry from its retreat in March last year, when it axed 300 employees across its marketing, events and recruitment departments. The company acted relatively early as coronavirus began to spread across the U.S., with Cohen even delivering the bad news to 100 staff during a Zoom conference.

The method drew criticism on social media, but Cohen still has no regrets. “It was a tough decision, but an important one. Eventually we do have a responsibility for everybody, you know, for our customers, our employees and sometimes you need to make these decisions,” he said.

Another decision he made around the same time, he said, was to go “upmarket” and try and win those bigger clients. “We won accounts like Netflix and GamesStop. We used this time to go after these customers, and cater for their needs.”

Cohen said TripActions is in a good position, with $400 million in the bank and investors — this time including Andreessen Horowitz, Addition founder Lee Fixel and angel investor Elad Gil, plus existing investors Zeev Ventures and Lightspeed Venture Partners — that see opportunities after Covid accelerated the company’s growth.

Is an initial public offering coming soon? The funding in June was in the form of “debt financing convertible at an IPO” and following Thursday’s announcement a spokesperson told Skift that an IPO is ruled out for 2020. “With this funding, our focus is really on growth and innovation,” they said.