Skift Take
A desperate urge to help get the travel sector back on its feet could give some companies a singular purpose, spurring innovation despite the pandemic’s hit to revenues.
— Sean O'Neill
Share
Tweet
Share
Post
Send

Until a recent turnaround, Oracle Hospitality was plagued by sluggish responsiveness to hotel and vendor requests for new services and smoother integrations. But the company has shown increasing responsiveness, as illustrated last week by its first so-called innovation week. What it did during that week may be worth emulating by other organizations in the travel sector.

Some backstory, first: When hoteliers want to add new technology to their operations, they often have to plug the services into their property management system, the core tech that stores data on guest and room inventory. Oracle’s property management systems, such as Opera, are the world’s most-used ones, running at about 40,000 properties. Yet Oracle Hospitality has long used legacy software code, processes, and commercial models. It set itself up for potshots from hotel and tech vendors.

To address this, Oracle Hospitality ran the innovation week. It made most of its staff available for five days around the clock, either dedicated full-time or on call, to help vendors and hotels.

“Several vendors were able to start and finish their integrations during the week,” said Laura Calin, vice president of strategy and solutions management.

Unlike a hackathon, the innovation week wasn’t about prizes or creating concepts that may or may not ever see the light of day. Instead, the integration work plugged in real services and got them into use at hotels right away. A week is much faster than the months-long wait some industry voices complained about a few years ago.

About 450 attendees at more than 200 organizations in 48 countries took part, with vendors such as Milan-based Human Touch, Amsterdam-based Travel Data Collective, and Santa Clara, California-based startup Nor1 praising the event’s efficiency and helpfulness.

Before the event, Andreas Loeseth, chief operating officer of Norwegian travel startup Fácil, had low expectations. Loeseth said he began two years ago trying to integrate with Opera and found it too frustrating despite meetings with Oracle Hospitality. But the innovation week surprised him.

“It was really great,” Loeseth said. His team “more or less” completed and “debugged” its integration with the cloud-based version of Opera during the week. Fácil’s service aims to make it easier for hotels to add self-service check-in and check-out using a mobile app or kiosk.

“Everything became a lot more clear after the discussions we had,” Loeseth said.

Oracle Hospitality sped up a few points in the process. Ordinarily, it requires integrations to get an okay from the unit’s professional services team. But that team isn’t always as technically knowledgable as the company’s engineers. The innovation week fast-tracked these approvals.

Inspiration for the Travel Sector?

Across the travel sector, the pandemic has devastated revenues. Layoffs and pullbacks in investments might stall innovation.

Yet the chaotic times have also shaken up some processes. That may open doors to fresh opportunities and mind-sets. A desperate urge to help get the travel sector back on its feet has given some companies a singular purpose.

“When you allow people to work for a good cause they can believe in, the enthusiasm and energy that gets put behind it creates magic,” Calin said.

The everyday reality at many large organizations is that siloed teams tend to undermine projects, with bureaucracies second-guessing or slowing new efforts. Yet slimmed-down staff could sow a spirit of innovation with managerial leadership.

Remote workers who use tools like Zoom and Slack can speed up knowledge sharing. But it won’t happen spontaneously. Managers have to create conditions for focused work in phased schedules to happen. 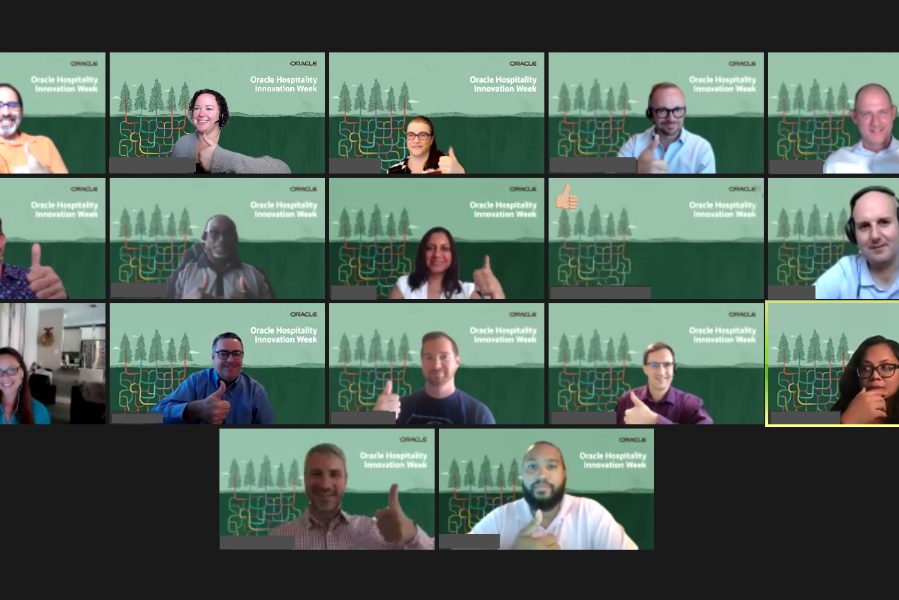 Given the positive response, Oracle Hospitality plans to introduce other changes.

“We’ve decided we’re going to have a mini-session every month, which will include an ‘ask the expert’ webinar,” Calin said. “We’ll do a second round of a full innovation week later, most likely in November when we release tools for our new integration platform. We’ll ask our partners for on-the-spot feedback to the new self-service tools, speeding their deployment.”

During the innovation week, Oracle Hospitality gave virtual forums for tech vendors who offer low-touch or contactless solutions to hoteliers to show off their tools, including Alice, Hapi, InnSpire, Intelity, Nonius, and Zaplox. The company plans more such sessions, too.