Tourist-Hungry Oklahoma Just Rebranded: Did It Get It Wrong? 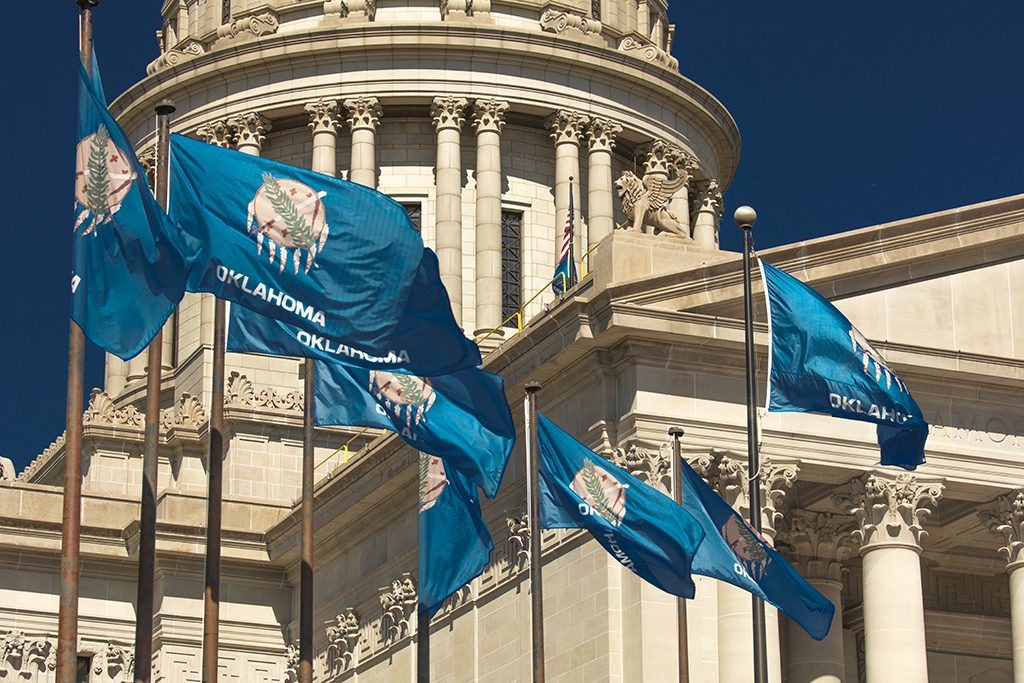 Oklahoma’s new Imagine That slogan is vulnerable to parody, while its smart-looking logo lacks the lasting impact of a Nike swoosh or a Texas Longhorn decal.

Quick: What are your first impressions of Oklahoma?

Well, imagine this: You’re in charge of expanding that perception. You want more visitors to come to this fly-over state and more people to stay and set up business here. This isn’t easy, but outside attention is rising lately. Matt Damon just filmed Stillwater around Oklahoma City, and Martin Scorcese is supposedly filming The Killers of the Flower Moon here this year. And you have over $250,000 to play with from a governor who is amped up about making Oklahoma a “top 10 state.”

That’s not a request. No, no, that’s the result.

Oklahoma launches its new branding this week with the slogan Imagine That and a dramatic star logo that coyly plays off patriotism (“the star is an American star,” a local leader explained), the military (chevrons pointing inward), and biodiversity (colors alluding to water, sky, agriculture, earth, and forest). The goal is to unify state agencies with a single brand, a rarity among states, and to promote Oklahoma as the last place where you can “still imagine the American Dream.”

Did they get it right?

Lt. Governor Matt Pinnell and the state’s tourism director last year assembled a team of 200 local designer volunteers to discuss state messaging, then hired a Canadian consulting firm to polish it off for reportedly $259,000. Considering the state still cowers under its Oklahoma Is OK slogan several decades back, local reaction to Oklahoma’s new slogan came fast.

Oklahoma City–based The Lost Ogle, the blog that first broke the story of the new slogan, sarcastically tweeted that the state put up new logos on welcome signs in a day, while critical signage on a highway connection sat unsigned for months. Graphic designers lamented how hard it is to screenprint an 11-color star. And new fodder followed a day later when a new state bill brought back lethal injection in the country’s most incarcerated state. You can probably imagine the comments.

Imagine That is both a Vacaville, California, children’s museum as well as a children’s book publisher. Usage frequently frolics through the most caustic meadows, as attested by reading its Urban Dictionary entry or a quick Twitter search.

So let’s pause to talk about Nebraska for a moment.

The fellow fly-over state launched its Honestly, It’s Not for Everyone tourism campaign in 2018. It cost $500,000 — double the cost of Oklahoma’s new effort — and faced instant backlash locally, but not nationally. Within two months, the self-deprecating and refreshingly honest approach got Nebraska TV coverage from Stephen Colbert and Kelly & Ryan, and an estimated $7 million of media exposure. It’s still in use two years later.

Oklahoma, whose annual visitation bumps between 18 and 21 million the past decade, isn’t likely to get equal coverage as Nebraska, and a slogan vulnerable to parody seems unlikely to influence new visitors or residents on its own. Maybe that’s OK. Even the Lord of the Rings trilogy — the one that defeated outright evil in an Oscar-winning campaign — reportedly influenced just 1 percent of the visitors to New Zealand, where it was filmed.

As a local who recently returned after a quarter century living outside Oklahoma — and certainly keen to imagine a greater Oklahoma — I would have loved to see the state go simpler: host a televised meeting of ten or so people and ask them to talk over the appeal of Oklahoma over dinner.

This team could include a state official or two, but also some saucier locals like SE Hinton (author of The Outsiders), Wayne Coyne (Flaming Lips singer), Joy Harjo (America’s poet laureate), Alfre Woodward and Bill Hader (actors), a travel writer (hint hint), a rodeo star from the panhandle, an award-winning school teacher from a small town, and a big-business fracker.

And I’d ask an outsider or two to come. Like Sam Anderson. He’s the New Yorker who covered the Thunder NBA team for The New Yorker, then accidentally got hooked on Oklahoma culture, couldn’t stop exploring it, and ended up writing the best-ever book on Oklahoma in general: Boom Town. Coming to Oklahoma, he writes of feeling “a mysterious inner needle beginning to vibrate — a needle … I had never noticed before.” Let’s hear more about that.

Importantly, all of this would be shared widely. The video becomes your campaign, not necessarily whatever slogan or logo results from it.

Or the state could also just listen to itself.

This week, Oklahoma leaders prefaced the Imagine That launch by noting Oklahoma is not a crossroads but America’s Hub. Over and over they said it: America’s Hub. It’s simple, it’s functional, geographically accurate, and evocative if not particularly poetic. It’s kinda better.

Now on to the merch.