E-commerce is unlocking new opportunities for travel and tourism gurus in Egypt and the Middle East. Local entrepreneurs are attempting to capitalize on the convenience of having an online business, but filling the gap for much-needed niche tourism services can be difficult to accomplish in a highly competitive market.

Mohamed Turisi was 20 years old and still living at home with his parents when his hopes of becoming a civil engineer in Egypt were completely dashed. Not only had he lost interest in becoming part of its oversaturated job market, but his job prospects in Egypt looked very slim. Unemployment in Egypt currently stands at 7.8 percent as of third quarter 2019.

This is when Turisi realized he had to shift paths and finally leave home.

The young man, who hails from the rural Mediterranean city of Mansoura, ventured out on his own to make it in the capital city of Cairo. The city, which is the largest in Africa, as well as the Arab world, is home to over 9.5 million inhabitants. It’s also where many of Egypt’s ancient wonders are located, including the Great Pyramids of Giza, the Nile, the Church of Virgin Mary, and Coptic Cairo. Egypt’s second largest city, Alexandria, is also conveniently two hours away on the Mediterranean.

Although he grew up in a rural town known for its ultra-conservative lifestyle, Turisi always had his eyes set on something more.

“I wanted to get out of there to meet like-minded people and be exposed to new ideas, cultures, and positive energy,” he said.

Turisi said most of his clients today are tourists coming from the United States, with some visitors from European countries.

Now a self-taught tour guide, Turisi started off as a freelance photographer on Instagram. He began shooting scenic pictures of the Great Pyramids of Giza, the Sphinx, and The Citadel of Cairo, which greatly resembles Turkey’s famous Blue Mosque.

“The way I started on Instagram was a complete coincidence,” Turisi said. “When I was 21, my father gifted my sister with a camera, a Nikon 3200D, that she rarely used. Eventually, she let me have it.”

This is how it all began.

Turisi’s e-commerce tourism platform is part of a new travel trend on the rise, particularly among young people in Egypt and across the Middle East.

By sharing his photography on social media and using relevant hashtags, Turisi eventually became a travel influencer, now with over 75,000 organic followers on Instagram. He also has a website where he offers boutique tourism services for solo travelers, couples, families, and tour groups.

Turisi has also partnered with a wide variety of businesses in the tourism sector, including souvenir and jewelry shops, desert safari and camel-ride tour operators, and Egyptian oriental perfumers. He brings his clients to these handpicked businesses and gets nearly 50 percent commission on each sale from the owners.

Around fall and wintertime, which are peak tourism seasons in Egypt, Turisi gets about three to five clients, some of which are groups. In such high seasons, he makes about $1,246 to $2,493 a month (EGP 20,000–40,000 per month) — 60 times more than what he would’ve earned as a fresh architecture graduate. 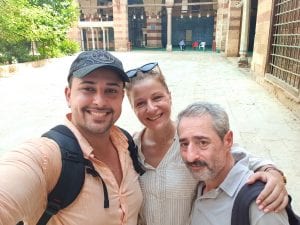 Turisi said he wouldn’t have been able to immediately start off as a tour guide if he worked for a tourism company in Egypt. And, even if he had gotten the opportunity, he still wouldn’t be generating that much income. Beginner guides working in the private sector typically earn about $187 to $312 (EGP 3,000–5,000) in salary each month.

“I was able to skip a lot of steps because of Instagram,” he said.

Turisi is just one of many tech-savvy millennials who are using social media to cash in on the Egyptian government’s eager attempts to revive tourism and travel.

Tourism has always been one of the leading sources of income for the north African country. Most recently, on December 15, Egypt’s central bank announced that it would expand a financing package to help distressed tourism firms and investors to $3.1 billion (EGP 50 billion) from the current $311 million (EGP 5 billion).

Since Mohamed Hosni Mubarak was overthrown after a mass uprising in 2011, Egypt’s economy and tourism revenues have been reeling.

The sector and the economy, however, have started to show signs of growth and recovery over the past few years, supported by a $12 billion bailout from the International Monetary Fund (IMF). Egypt was granted the loan in November 2016 and received the last installment in July 2019.

Egypt also recently topped Forbes’ Where to Go Next list, in which the magazine recommended the top 27 destinations to visit in 2020.

“The government, for example, recently refurbished the highway between Cairo and Sharm El Sheikh,” Turisi added, noting that the trip now takes only four hours versus seven.

The road for decades was known for its mountainous and often dangerous twists and turns. The new renovations are also seen as a way to encourage local tourism between Cairo and the Red Sea city, which is recognized as one of the world’s top diving destinations.

“Things are much more organized in the sector than before, even workers have changed their attitude to be more welcoming of tourists,” Turisi added.