Material Matters at The St. Regis: Covering the Job of Hotel Upholsterer 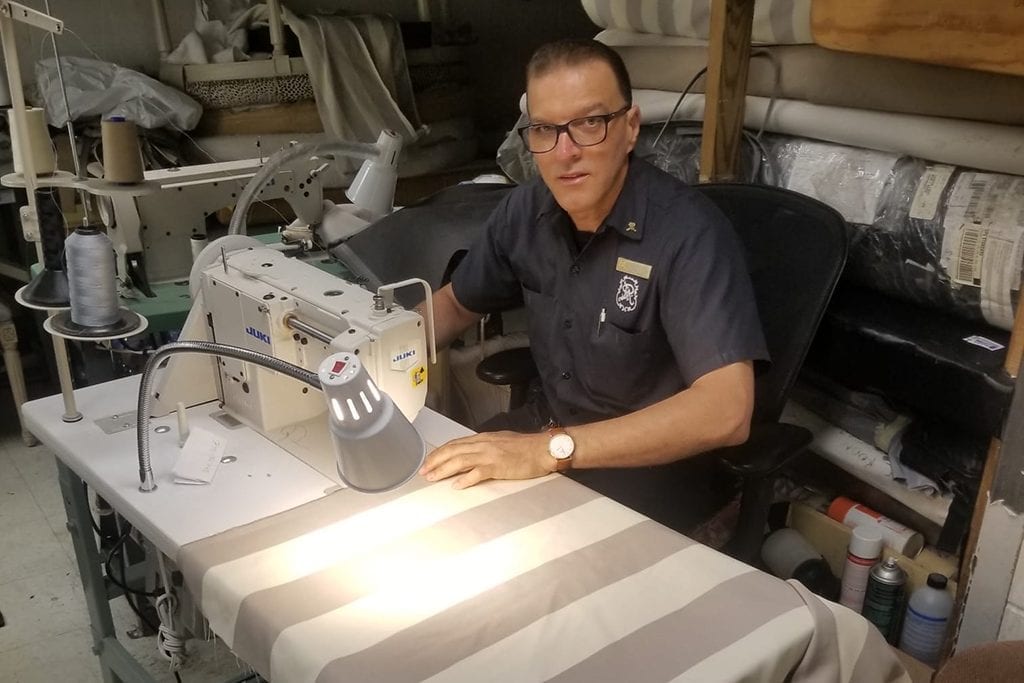 Whether it's hanging on the walls or blanketing chairs and sofas, fabric plays a starring role at The St. Regis New York. That's why the hotel employs a full-time upholsterer, who is constantly canvassing the premises to keep material in tip-top shape.

You likely haven’t paid much mind to the material covering a hotel’s chairs, sofas, and, in some cases, walls. But that’s all Jose Gabriel Perez thinks about during his workday.

The 52-year-old Perez is the upholstery specialist at The St. Regis New York, a full-time position he has held since 2007. He handles all the upholstery needs at the Marriott property, ensuring that the fabrics within the walls of the landmark hotel are preserved and in excellent condition. The scope of work ranges from mending couch pillows and curtains to re-covering armchairs and sofas.

Born and raised in the Dominican Republic, he learned the art from his father, who had an upholstery business in Santo Domingo. “My father started bringing me to work when I was 12,” he said, noting that he learned 80 percent of what he knows from him.

Perez said that among the lessons his father shared were attention to detail and the importance of sewing well. “You have to understand pattern-making, design, and style,” he says. “You have to learn to measure properly and concisely.” In fact, Perez says the most important part of the trade is the concept, taken from the world of carpentry, “of measuring twice, but cutting just once.”

Prior to coming to The St. Regis, Perez was working at an upholstery shop in Queens for a friend’s brother. That friend happened to be the upholsterer at The St. Regis. When he retired 12 years ago, he handed off the job to Perez.

The St. Regis New York is a rarity in hiring a full-time upholstery expert. But Senih Geray, the hotel’s general manager, said the position is well-justified. “In the luxury world, we always take pride in focusing on the little details and making sure nothing is overlooked. Within the hotel — which, in addition to public spaces, has 238 rooms, including 67 suites — there’s a lot of fabric.” Geray continued, “In addition to the furniture, we have silk wall coverings in every room. There are four or five panels in a regular room and in a suite, that multiplies quite a bit.”

Given the sheer amount of fabric everywhere, Geray said, “We believe our surroundings and our furnishing are so important to guest satisfaction that we want to take care of it every day.” That’s just what Perez does. On a typical shift, Perez is given lists of items in need of repair by the butlers in charge of each floor. Furniture requiring TLC is brought down to his basement workshop. Geray says the space, which is located by the engineering department, is the size of a standard room, about 450 square feet. In addition to separate machines dedicated to working on fabric, leather, and metal, the shop, says Geray, “has good lighting so Gabriel can focus on exact details. Plus, he has a very good stereo system in there to keep motivated throughout the day.”

A chair will take Perez a day or two to repair, while a sofa may take four or five. Items with a lot of studs and buttons are the trickiest, notes Perez. Ottomans, in particular, are difficult to reupholster, since “there can be up to 40 buttons on them, which have to be equally spaced, or it’s clear they aren’t done right.”

And Perez, ever the perfectionist, wants it done right every time. Nothing gives Perez more pleasure, he said, “than the satisfaction of a job well done. When I am able to match fabrics perfectly, when cushions fit tight, that is fulfilling.”

According to Geray: “Gabriel is a very detailed individual. He doesn’t take shortcuts. It can be a tedious job, but I am glad we have a patient individual like him to tackle it. He is a quiet hero who we can always count on. What he does is unique, and he is a great asset for us.”

Perez said upholsterers like him are a dying breed and he wishes more people would consider picking up the trade. For him, the art of upholstery “has allowed me to have the job and the life I have today. I would never have thought it was possible growing up in the Dominican Republic.”