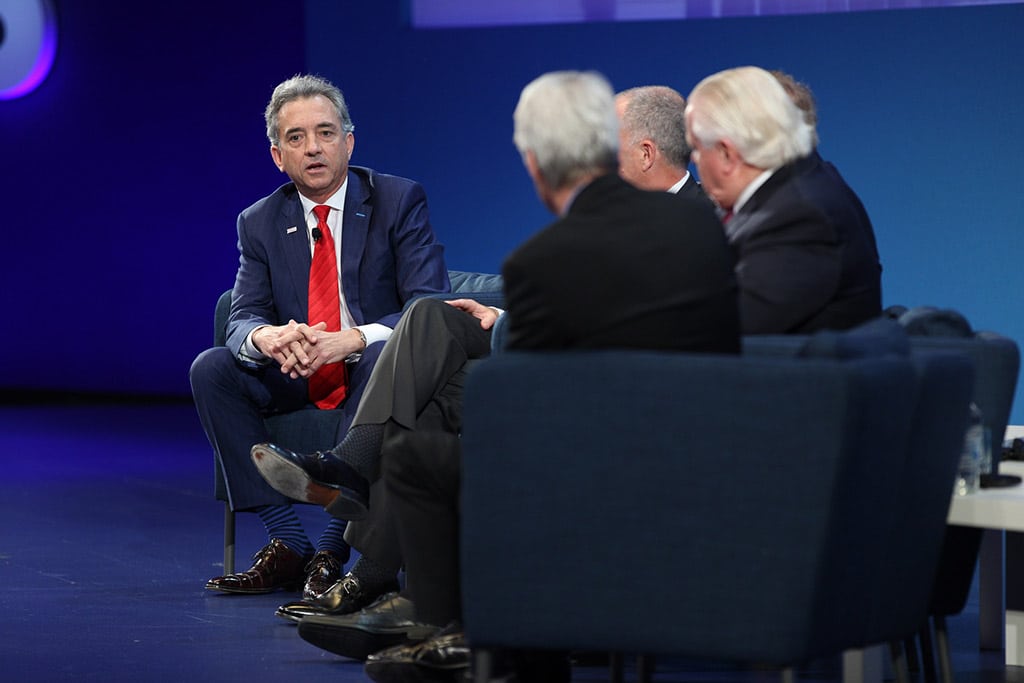 Brand USA has reported positive returns on investment and built the U.S.’ national tourism marketing operations from the ground up over the past six years. But now one of its most important tasks is ensuring the President -- and his Twitter handle -- don’t derail its momentum.

Just as Brand USA officials were getting familiar with the Trump administration and its new Commerce secretary, Wilbur Ross, the hammer dropped without notice.

One immediate challenge: getting on the Trump administration’s good side.

Earlier this week, Skift sat down with Brand USA CEO Christopher Thompson at the U.S. Travel Association’s IPW Conference in Washington, D.C. to talk about the organization’s first six years of operations and the challenges and opportunities on the horizon.

Speaking at IPW on Monday, U.S. Secretary of Commerce Wilbur Ross tried to convey the message that the Trump administration wants to support the U.S. travel industry despite conflicting and controversial rhetoric about travel and laptop bans, as well as building a border wall along the U.S.-Mexico border consuming much of the president’s first five months in office.

Brand USA is just getting to know Ross, Thompson said, adding that his message seems sincere.

“Don’t think that his (Ross’) remarks weren’t vetted through the White House,” Thompson said. “What I’ve also been told by people that have had some interaction with him is he doesn’t say things unless he believes in them. You think that he said all the things that you would want him to say, and that we really have been wanting someone in the administration to say, and he’s the appropriate person.”

Ross told more than 6,400 travel industry attendees that the Trump administration is prioritizing travel and tourism, and he offered a supportive message — although there is ample reason to be skeptical given the White House’s actions to date.

While Ross spoke, the specter of Brand USA’s proposed elimination hung over the audience. The smart money says that Congress is unlikely to eliminate Brand USA despite Trump’s proposal, but how it will all shake out is unclear.

What is clear is that the White House and travel industry aren’t yet on the same page.

Brand USA representatives earlier told Skift that it’s proposed elimination came as a surprise; the White House hadn’t given the organization notice before the President’s budget was publicized.

Adding to the angst, President Trump tweeted six times between June 3 and Ross’ speech on Monday advocating for the travel ban and taking a hard-line and vague approach on international arrivals to the U.S.

As head of the Department of Commerce, Ross is the White House’s de facto travel and tourism leader. “He is responsible for travel and tourism, so the fact that he got up in front of our stakeholders and said what he said, I think it reflects what we’ve always thought, which is that the administration gets tourism,” said Thompson.

Thompson was previously CEO of Visit Florida and came on as Brand USA’s CEO in November 2012, more than a year after the organization began operations in May 2011. Like Brand USA, Visit Florida this year has had its funding challenges, too.

One difference between the Obama administration and Trump, Thompson said, is that the current president is addressing things early on that could potentially have a direct impact on travel, Thompson said.

Despite travel ban headlines over the past five months, most travel policies for international travelers remain unchanged, Thompson said.

“It’s mostly a perception problem than it is the reality, because we have two legal responsibilities, promote the entirety of the country and then communicate accurate and timely visa and entry policy,” he said.

Brand USA needs to play a political game in Washington and Thompson may be downplaying some of the changes in travel and visa policies, including much tougher vetting and the use of social media to inform application decisions, for example.

“Nothing has changed about how anybody gets a visa in the world who wants to come to the United States, and there’s only been one change, one policy change as it relates to entry and that’s the electronics policy with eight countries and ten gateways in those eight countries,” Thompson said.

Brand USA’s funding fate largely lies with Congress. The organization has had bipartisan support from its beginnings when passage of the Travel Promotion Act in 2009 created it. In December 2014, Congress reauthorized Brand USA.

Brand USA is a non-profit organization and its funding comes from a mix of donations from more than 700 partner organizations, and matching funds generated by the fees international travelers pay to the Electronic System for Travel Authorization. So Brand USA’s funding doesn’t come out of taxpayer coffers.

WORKING WITH THE TRUMP ADMINISTRATION

Brand USA can’t lobby Congress on its own behalf, per the Travel Promotion Act, but Thompson said he still meets with politicians to explain the value of travel marketing.

Working with politicians is one of the best parts of the job, Thompson said. “However long they’ll give me, I give them as much as I can give them, and they pretty much say this [funding Brand USA anew] seems to be a no brainer,” he said.

“With members of Congress, I haven’t had one single meeting where I haven’t been invited to go provide information,” said Thompson. “I’ve never walked out of there and everybody’s not going ‘wow, we haven’t had this before?'”

Most members of Congress want to create economic opportunity in their districts and understand travel is a vehicle for that, said Thompson. “When they can support something like Brand USA, that literally brings benefit to every corner of the country in rural and urban areas, in up to five territories and in the District of Columbia,” he said.

Being America’s National Tourism Board

When Brand USA was created, the commerce department also created the National Travel and Tourism Office and appointed Kelly Craighead as its first head. Thompson said the Trump administration hasn’t yet appointed someone new to head the office.

That position, however, isn’t a cabinet level one. Unlike many other countries, the U.S. lacks a dedicated travel and tourism cabinet position as that’s only one part of Ross’ responsibilities.

“That position is responsible for activating the national travel and tourism strategy across nine federal agencies,” said Thompson. “That’s the closest thing we’re going to get. It is appointed, but it’s not the level of a cabinet position. Everybody out there would suggest to you that we need that level, but Kelly being the first, and the role that she defined was tremendously beneficial.”

Brand USA’s role is even more important as a result, said Thompson. “We’re always asking ourselves how we can figure out how do we add value?” he said. “That’s one of the pillars of our statement or purpose, the fourth one which I kind of brought with me from Florida, was how do we add value to what’s been there for decades?”

“We’re the new guys on the block and shame on us if we think we’re coming in to save the day because that’s not the case…That is also something that drives us significantly right now,” he said.

Brand USA is “in the very early stages of being a more mature organization,” according to Thompson, and the president’s proposal to take away its funding will test the organization’s mettle.

Thompson said there were 18 employees when he started in 2012 and the most recent headcount is 76 staff.

Brand USA has mostly enjoyed bipartisan support in Congress but has also taken some hits from budget hawks in the legislative body. Thompson is looking ahead to the organization’s next five years of operations despite the Trump proposal.

He said Brand USA’s partners are still as enthusiastic about its work as they were on day one. “Who has the environment and the landscape like that to operate in?” said Thompson.

Brand USA’s National Parks movie has been one of its biggest successes, said Thompson. “This movie is in 100 theaters and science centers around the world. It’s going to have been seen by up to five million people and we’ve won nearly every award you can win for this kind of film,” he said.

Largely driven to counter the White House’s controversial and xenophobic messaging, Brand USA recently launched its “One Big Welcome” campaign (see video below), which features locals in destinations across the U.S. showcasing why they think their hometowns are special places to visit.

Still, that amount is within the world’s top five-highest national tourism market budgets, he said. “People even think we went from zero to $165 million and they think that’s huge,” said Thompson. “But you definitely need to make sure that you’re getting the most out of every dollar you’re trying to deploy.”

Despite Brand USA’s efforts, perhaps the most potent U.S. tourism marketing force in the weeks and months ahead will be the man in the Oval Office and his Twitter account.