Residents of Bruges support tourism and feel that it's economically necessary but they also feel that it negatively impacts their quality of life.

As more destinations around the world wake up to the reality of overtourism, Bruges, Belgium went straight to the people most affected by millions of tourists visiting the city each year — its residents — to discover how they feel about sharing their city with a disproportionate amount of visitors.

Some 19,500 people live in the tourist-laden city center of Bruges, which attracts nearly nine million visitors per year. That amounts to about 126 visitors per day per 100 residents, according to Vincent Nijs, senior researcher and project manager at Visit Flanders.

During the height of tourist season there are often three times as many tourists as residents in the city on a given day.

As part of his MBA thesis at Modul University Vienna last year and in partnership with Visit Bruges, Nijs conducted an online survey of more than 1,200 Bruges residents ages 18 and older in September and October 2016. Some 922 respondents lived in the Bruges metro area and 322 resided in the city center and central tourist district.

Nijs was inspired by researchers from the University of Georgia, Virginia Tech and East Carolina University who studied how the feeling of empowerment in residents impacts their perceptions of tourism. The researchers identified three types of empowerment — psychological, social and political — that affect how residents either positively or negatively perceive tourism in their cities.

Despite the crowds, noise and traffic from tourism, some 76 percent of respondents said they support tourism and want to see it remain important in Bruges. About 70 percent of respondents felt the positive benefits of tourism outweighed the negative impacts and 78 percent said Bruges should continue to promote tourism.

On a scale of one to five (five being the best), psychological empowerment, or residents’ feeling proud of their city because of tourism, ranked four out of five.

But survey results show that pride in one’s city and being supportive of tourism doesn’t mean people believe their lives are better because of tourists. Social empowerment, or the perception of the social benefits of tourism, ranked 2.9 out of five and political empowerment, or residents feeling that they have a voice in tourism planning, ranked two out of five.

Bruges is No Stranger to Overtourism

The concept of overtourism isn’t new to Bruges as the city has been working for decades to minimize its negative impacts. “About 20 years ago the city introduced a concentration model which said that tourism should be concentrated in the southern half of Bruges and today that’s where most tourists go in Bruges,” said Nijs.

Bruges also began to limit new hotel construction in 1995. “But today the share of day trips is outperforming the overnight stays in Bruges,” said Nijs. “Last year there were 2.2 million overnight trips and more than four million day trips.”

Nijs said Bruges is using data from visitor’s mobile devices to determine how many day-trips and overnight stays the city receives. “International standards consider a day-tripper as someone who visits a place for at least four hours but does not spend the night in an accommodation,” he said.

About half of the day-trippers in Bruges, however, only visit for two or three hours. “But we still counted them as day-trippers because they were there,” said Nijs. “This has been a phenomenon in recent years as more long-haul international travelers who want to visit as many places as possible in a short amount of time. Yet, very little marketing has been done specifically for day-trippers.”

Copenhagen and Antwerp, Belgium have launched marketing campaigns to promote the benefits of tourism to residents while other cities such, Venice and Barcelona, have taken steps to curb tourism growth.

Below are six charts that display the topline results of the research about Bruges.

Support For Tourism in Bruges

More respondents said they supported tourism than those who indicated that it does more to harm than help Bruges.

A higher percentage of residents living in the city center (80 percent) than those living in outer neighborhoods and municipalities said they supported tourism. “This is likely because people who live in the city center know that there are issues with tourism but also know how important tourism is for them,” said Nijs. 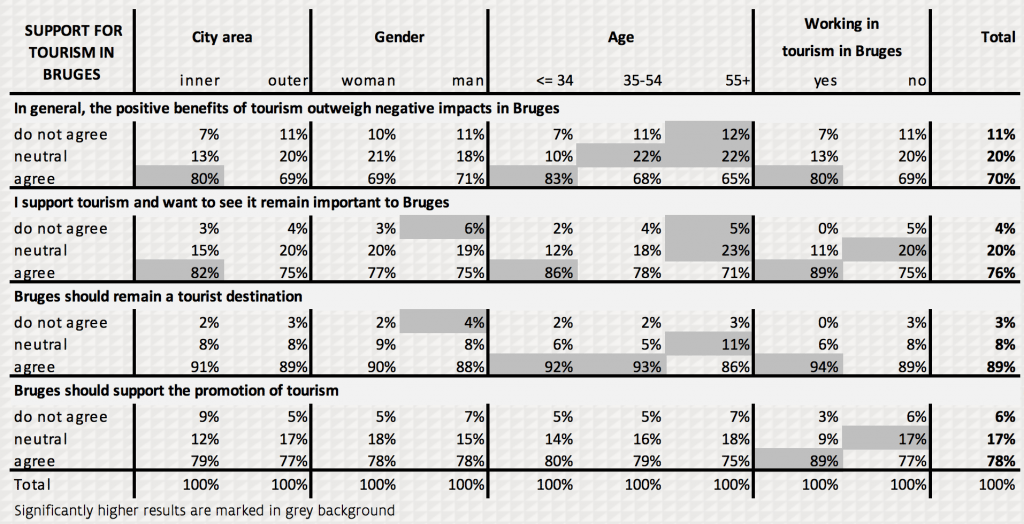 Many Bruges residents have a favorable view of tourism but that doesn’t align with their thoughts on how its impact their quality of life.

Some 56 percent of respondents from the city center said they agree that tourism positively contributes to their income and standard of living compared to 52 percent of residents in surrounding areas who agreed. Nearly half of respondents from both the city center and outer areas felt more tourists in Bruges will lead to friction between residents and tourists and nearly half of both groups also felt tourism causes Bruges to be overcrowded.

Though Bruges is a well-known destination for its canals and architecture, its identity and reputation are different from some other destinations experiencing a crush of tourists. “I was in Amsterdam last weekend and I really noticed that they might have a problem with specific kinds of groups visiting the city,” said Nijs. “Many are cultural travelers not creating problems but some are drunken tourists and Bruges typically doesn’t have that problem.” Is Tourism A Nuisance, Does it impact livability?

The survey also asked respondents for their thoughts on Airbnb’s impact on tourism in Bruges (not shown in the chart below). About 60 and 70 percent of respondents from the inner and outer city, respectively, said they were neutral when asked if tourists who stay in an Airbnb rental provide more nuisance than other tourists.

Bruges only has about 400 rentals currently available on Airbnb, said Nijs. “The neutral category is so big because people don’t really know enough about Airbnb yet,” he said. “I’ve been talking to policy makers in Barcelona where there are more than 16,000 rentals on Airbnb and 7,000 of those don’t have a permit and aren’t legal.” Should there be more or fewer visitors to Bruges?

Many respondents felt there could be more overnight stay and individual tourists in Bruges but indicated they want fewer cruise and group tours to visit. About one-third of inner and outer city respondents felt more day trip tourists could visit and about half of both groups are neutral on the number of day trips.

Local governments and city councils can take action on limiting how many tourists visit or impose other restrictions on tourism. But 70 percent of respondents felt they don’t have a voice in local government to express their views on tourism. “There’s no relation between political empowerment and perceived negative impact,” said Nijs. “Professor Bynum Boley, one of the professors who studied how empowerment impacts tourism, expected that if people feel they have a voice in government that they’ll see fewer negative impacts. That ended up not being true because these people went to the city government and were already upset with tourism.”

As more destinations like Copenhagen attempt to work with residents to warm them to the concept of tourism, respondents were mostly indifferent to whether tourism makes them feel more connected to their communities.

Destination marketers can improve on helping residents understand the psychological, social and political empowerment from tourism. “Tourism boards should listen to their locals and organize debates about tourism,” said Nijs. “There’s the kind of research I did and then the qualitative research of talking to people in the street is also very important.”