Companies often chase and vie to sign on influencers for marketing purposes, but all can agree that Google is one of the most powerful forces in travel. Despite Facebook's inroads, Google travel products are ascending and Heckmann will shed light on their trajectory. 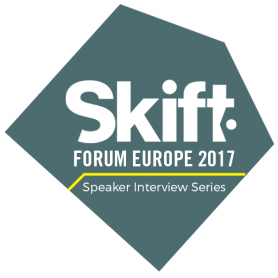 On April 4 in London, hundreds of the travel industry’s brightest and best will gather for the first Skift Forum Europe. In only a few short years Skift’s Forums — the largest creative business gatherings in the global travel industry — have become what media, speakers, and attendees have called the “TED Talks of travel.”

The following is part of a series of posts highlighting some of the speakers and touching on issues of concern in Europe and beyond. See the complete list of amazing speakers and topics at this year’s event.

If you want to dig for new information about consumer behavior in travel and beyond it, Google’s a good place to start.

Oliver Heckmann, vice president of engineering for Google Travel, says one takeaway so far from its Google Trips app, which debuted in September, is that more than one third of the app’s users download destination data so they can use it offline later.

“Offline access is essential,” Heckmann says. “We see that more than a quarter of travelers do not have a stable connection when they use Google Trips in-destination.”

Travelers also like to build their own itineraries and download, on average, 12 starred items saved on Google Maps to refine their planned wanderings, he says.

What’s clear about the future of travel — and life — is that the tech revolution has inordinate sway over things to come. Heckmann says 20 percent of Google app for Android users opt for voice search instead of tapping on their phones or tablets. Separately, people accessing Assistant on Google Home are taking advantage of its translation services, and that’s a utility that is vital for everyone from travelers to refugees and aid workers.

On the competitive front, Heckmann won’t commit to launching tour, hotel or airline booking capabilities in the Google Trips app, although he adds this will be explored “in the future.”

While Heckmann won’t say much about Facebook’s launch of City Guides, which is a competitor to Google Trips,  he does think competition makes the world go round.

“We view competition as a forcing function that spurs innovation and the development of amazing user experiences for travelers around the globe — which we think is a great outcome for everyone,” Heckmann says.

Heckmann will appear at Skift Forum Europe in London April 4, and will discuss how Google, and everything from artificial intelligence to machine learning and voice search, are rewriting the next acts of how people get around the globe.

We queried Heckmann via email about some of these topics, and the following is an edited version of his responses.

Skift: When is Google Travel, including Google Flights and Hotel Ads, going to get serious about Europe or do you feel constrained because of the regulatory environment?

Heckmann: We’re actually seeing a lot of momentum in Europe and are happy with the strong partnerships we’ve developed there. Google Flights is already available in many European countries including Portugal, Germany, France, Austria, Sweden, and many more. This region continues to be a focus for us. We’re constantly working on deepening our relationships with airlines like Lufthansa, and have plans to launch to more countries in the coming months.

With regards to hotels, we work closely with European hotel chains and groups such as AccorHotels. We’ve seen hotel partners like Premier Inn use Google Hotel Ads to increase their bookings from new customers by 40 percent compared to paid search ads. Bedfinder, a business unit of the HotelPlan Group, is another great example. After launching in the U.S. in September 2016 and in UK in December 2016, Bedfinder acquired 25,000 new customers by using Hotel Ads and Book on Google.

We also have great partnerships with a number of hotel integrations partners like WIHP, who have been instrumental in getting European hotels of all sizes set up with Hotel Ads, and are extremely excited to grow these even further this year.

Skift: What have you learned from the Trips app? When and how are you going to introduce tours and activities bookings in it? Why stop there? Why not hotels too?

Heckmann: Since we launched Google Trips last September, we’ve been really excited and encouraged by all of the positive feedback we’ve received from travelers. In fact, we’ve learned a couple of key things so far.

Offline access is essential: We see that more than a quarter of travelers do not have a stable connection when they use Google Trips in-destination. And, more than one-third of Trips users download relevant city data expecting to not be online and connected at any given moment.

Travelers love to control their own destiny. With Google Trips, it was important for us to give travelers options: the ability to follow curated day plans based on what we at Google know about past trips to a particular destination, as well as the ability to create their own plans. We see that many travelers like to structure their own days, using on average 12 starred items that they saved on Google Maps to tailor their itinerary as they see fit.

As for integrating partner content and booking capabilities, this is absolutely something we’re open to exploring in the future. We’re just getting started with Google Trips and are excited about making the app even more useful for travelers in the months and years to come.

Skift: Do you have an artificial intelligence advantage over your competitors? How are you going to leverage that?

Heckmann: As a company, Google has been using artificial intelligence (AI) and machine learning to create even better experiences for the people who use our products and enable capabilities that weren’t possible before, like voice-based interaction. For example, in the Google App on Android, 20 percent of U.S. searches are now made by voice. We’ve seen how powerful AI can be with tools like Google Translate, which became a critical tool during the refugee crisis in Europe, supporting the growth of translations between German and Arabic by 5X.

With regards to travel, we’re especially excited about how we’re using machine learning to make our tools more assistive and conversational. This means surfacing better recommendations, designing itineraries, improving user interfaces and processing information more efficiently. For example, people can already ask the Assistant a variety of travel-related questions and instantly get helpful answers. With the Assistant on Google Home, travelers can already translate languages (“how do you say good evening in German?”), ask about an upcoming trip (“when is my trip to Zurich?”), and get important details about a particular location (“is the Sagrada Familia open on Mondays?”).

Skift: Facebook just debuted a City Guides feature in the Facebook app that has some parallels to the Google Trips app. What’s better about the Trips app and isn’t it nice that Facebook is providing a little competition?

Heckmann:The online travel industry is always evolving, which is something we love and appreciate about the space. Right now, travelers have a variety of different options available to them. They can go to Expedia, TripAdvisor, Hopper, Facebook, and other partners to address their specific travel needs. We view competition as a forcing function that spurs innovation and the development of amazing user experiences for travelers around the globe, which we think is a great outcome for everyone.

As for Google Trips, I’m personally a big fan of the day plans feature, being able to quickly customize my plans has made planning the days of my vacations a lot easier, and much more fun.

Oliver Heckmann will be speaking at Skift Forum Europe on April 4 in London.