How Where-to-Go Lists Get Made: 5 Podcast Takeaways 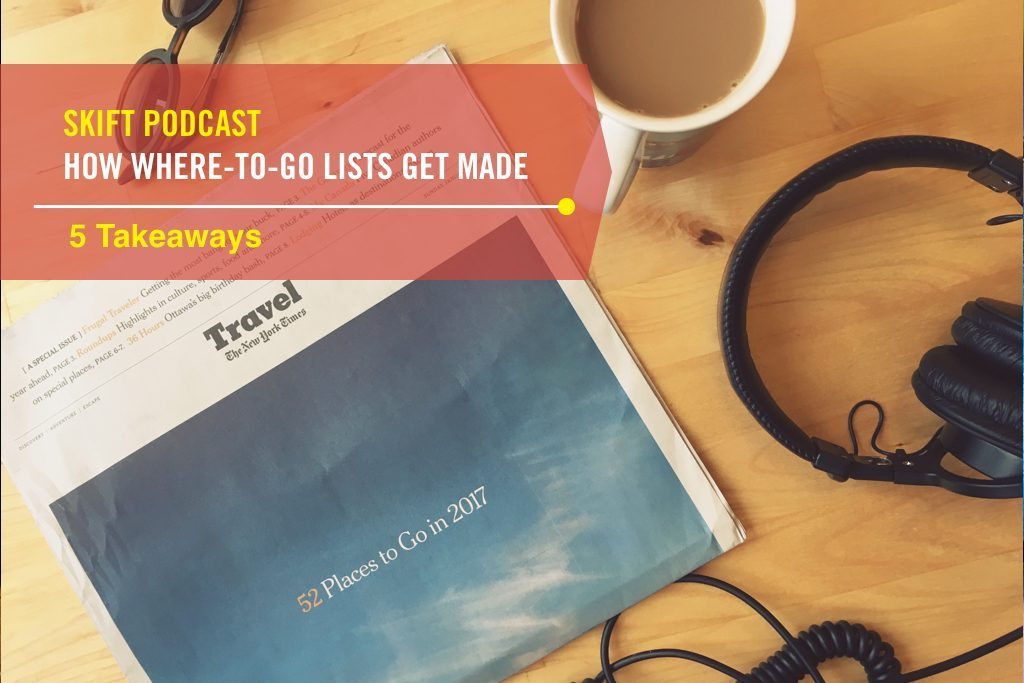 We looked at Where-to-Go lists for a recent episode of the Skift Podcast, in which we explored those big beautiful roundups that appear every January touting: these are the hottest travel destinations for the upcoming year. Naturally the selection process can be painstaking, and many destinations clamor to make the cut, but two experienced editors gave us some valuable insight into how these lists are made.

Any major publication that creates one of these lists will get some angry responses questioning the chosen destinations. At some point the editors will have to explain their decisions, which is why the deliberation lasts so many hours, and that’s after months of research and culling.

According to Saltzstein at The New York Times, one of their most controversial picks this year was Detroit, which came in number nine. They chose Detroit because, according to Saltzstein, “everybody loves a good comeback story.” On the other hand, he explained that “they’re not past their difficulties, but there’s a lot of stuff going on there, young artists, restaurant tours, and entrepreneurs doing interesting startup stuff. There’s going to be a giant new stadium opening in the fall, that’s going to be the new home to the Red Wings and the Pistons. Beautiful art museum.”

Saltzstein received ample pushback from readers about Canada being selected as number one, and interestingly, many of those skeptical readers were Canadian.

Over at Ekstein’s table at Bloomberg, Iran was among their most controversial destinations, due to possible safety issues. Ekstein explained that “It feels like the next Cuba in some ways, and people really want to get to places first. We have to make that call… We took that chance, and actually the news really substantiated the claim.”

Safety weighs on the minds of the editors.

Editors are aware that the list isn’t purely theoretical — many readers will actually travel to the recommended locations. To that end, the decision-making process must take practicalities into account, including personal safety issues arising from terrorism and political unrest.

“We certainly wouldn’t exclude a place because there was a terrorist incident,” said Saltzstein. “A couple of years ago we had Paris on the list and the first major terrorist attack there happened the week that our issue came out. I think that the reality of any major city in the world now is it’s a possibility. You take the same precautions that you would traveling anywhere in the world.”

Each list has a specific audience and therefore won’t speak to every traveler.

The New York Times may have global reach, but it’s still rooted in New York City, while the majority of Bloomberg’s readers live abroad, largely in Asia and Europe. For the average New York Times reader, Myanmar may seem quite far-flung, but Bloomberg readers have a different perspective. Bloomberg readers are also more likely to be male business travelers, so they may be less likely to think about Zika as much as some other demographics.

Ekstein spoke about the practicalities of suggesting each individual trip for their audience. “Is anyone going to plan a trip to all of Canada? I personally don’t think so, so let’s give them the city that they should go to. We kind of used that as a barometer — how is somebody going to plan their actual vacation and how do we build our package around what they’re going to use most readily?”

Saltzstein clarified that the New York Times list “is not a checklist, it’s a starter kit,” meant to help with brainstorming and inspiration more than act as a step-by-step guide.

While the list format may suggest a strict ranking system, there is no scientific procedure here. Readers will have to take it with a grain of salt and not treat it like gospel.

Saltzstein said, “I always joke that when people are like, ‘I can’t believe this was two spots above that,’ as if there was some sort of actual scientific ranking system that we employ. I mean, we try… not having two places in Asia in a row, or two places of the same scale in a row.”

Many publications, to maintain editorial integrity, ignore the PR fluff and trust their writers to make well-informed, unbiased decisions about which destinations are most appropriate for consideration.

When it comes to pitches from PR firms and destination marketing organizations, Saltzstein says, “I look at none of them. I literally get an email, and I delete it. I get a phone call, I tell them I can’t talk to them right now, send me an email. I delete the email. Sorry.”