We're totally onboard with hotel companies that are taking this kind of all-in approach to reinventing their brands, especially ones that have been around for so long, like Marriott. Let's just hope Marriott can do the same with Sheraton, too, and all those other 28 brands it has.

In Charlotte, North Carolina, Marriott has built itself a living hotel laboratory.

In the past year, the company has invested millions into reinventing the Charlotte City Center Marriott, a hotel originally built in 1984 and in dire need of a renovation. Marriott International purchased the property in 2013 for $111 million with the intention of transforming it into the first M Beta Hotel, allowing the company to use it as an innovation test lab to collect real guest feedback, as well as serve as a showcase for hotel owners and developers.

It’s an anomaly, in many ways, to most Marriott hotels, and not just in the way it looks and feels. By owning the hotel property itself, Marriott has carte blanche to test out as many new concepts as it wishes, many of which reflect so many of the trends defining the future of travel and hospitality. Those themes include: A greater sense of community, communal spaces. This is best seen the “openness” of the public spaces and food-and-beverage outlets at the hotel, from Stoke Restaurant’s open-kitchen concept where guests are encouraged to interact with the chefs to Coco and The Director, the coffee shop that also triples as a co-working space and event space, thanks to its stadium seating set-up.

Making guests feel right at home. All the guest rooms at the hotel convey a new more modern look and feel. Instead of tired, traditional, worn-out carpets, you have sleek gray-wood floors. Instead of tubs, most rooms now have walk-in showers. Some rooms have also done away with the traditional hotel desk (although I am thankful my room has not), and closet space/drawers have been somewhat minimized. All rooms have 55-inch flat-screen televisions that let you stream Netflix and Hulu, just as you would at home. And even the M Club Lounge on the first level was designed to feel more like a home than a hotel lounge, with cozy seating and an expansive, state-of-the-art kitchen.

Localized everything. Yes, it does seem like every hotel these days is capitalizing on the local trend and the M Beta Hotel is no exception, but it does apply it in some inventive ways. Perhaps one of the most interesting is the placement of locally sourced products, from kitchen goods and leather goods to skincare products and local snacks, all in the Coco and The Director coffee shop.

The rise of on-demand services. In addition to letting guests stream their favorite shows from Netflix and Hulu on demand in their own rooms, the hotel is enabling other on-demand features, too. The most prominent of these is found inside the Flex fitness center. While it has all the gym equipment you’d expect from a hotel, it also has on-demand access to nearly 1,000 digital training classes (think yoga, spin, etc.) for groups or individuals. Some equipment can also be synced to your fitness apps. Guests can also book local fitness classes in the area directly online. This hotel also enables mobile check-in, keyless entry, and the ability to chat/message hotel staff to make special requests. Guests staying at the Charlotte City Center Marriott can work out to on-demand fitness classes.

More flexible meeting and event spaces. In partnership with LG, the Charlotte City Center Marriott is home to the first LG Studio space. It’s basically a full LG kitchen that’s housed on the same floor of all of the hotel’s third-floor meeting space, and can be used by groups for a variety of meetings and events, from a small brainstorming meeting to a networking event or even a cooking class. Another unique event space in the hotel is what’s called a “Back-of-House Pop-Up” that feels like a speakeasy.

Measuring the likability of each of these new concepts are “Beta Buttons” that are about the size of a hockey puck, strategically placed near all the new concepts that are being tested out at the hotel. If a guest likes a certain concept, she simply touches the button and her “like” is registered on the Beta Board that’s placed in the lobby.

At a press conference on Oct. 11, Marriott International CEO Arne Sorenson explained the company’s motivation and strategy for transforming the Marriott brand with this hotel. “We need to make sure the brand continues to evolve with the tastes and desires of our customers, and those tastes and desires continue to change year after year. This is the perfect hotel to showcase that reinvention.”

Each of these new test features and concepts are tied to a multi-year global transformation of the Marriott brand which initially began five years ago. Marriott wants to take an historic brand that’s often been described as “comfortable,” “reliable,” and maybe even “boring,” and transform it into something that’s more “design-driven,” “innovative,” “sophisticated,” and “localized.”

Already, some of the concepts have made their way into other Marriott properties, especially the new guest room, which is expected to be in a total of 50 Marriott hotels by year’s end. Mike Dearing, managing director of Marriott Hotels, said that for the M Beta Hotel, it cost Marriott approximately $36,000 per room to renovate it to the new brand standards, which are mandatory for Marriott newbuilds going forward.

The concepts at the M Beta hotel will always evolve and change, although executives didn’t give any set timelines for when they would be changed. Those concepts aren’t the only new things Marriott is launching in an effort to innovate its brand and its guest experience, either, such as Marriott’s recent partnership with TED Talks, for example. The LG Studio at the M Beta Hotel serves as a kitchen and flexible meeting and event space.

Sorenson said the choice of the Charlotte property for the lab was based on location and demographics. “This hotel has been here for 32 years and it was the right age to be reinvented significantly because it was an urban hotel in a city that had lots of drivers for business. We could step in here and experiment with F&B offerings that would be more difficult with a tertiary market,” he explained. The transformation to become an M Beta Hotel took place over two years.

While guest feedback so far, Marriott executives noted, has been overwhelmingly positive, they said the feedback from owners has been equally so. And Marriott is already generating numbers to show that the reinvented properties are seeing better guest satisfaction scores and higher revenues.

“They love it,” said Sorenson. “They absolutely love it. They are not monolithic. Some get it intuitively and in many respects, they think it’s about time we did it. Some, you have to sort of drag kicking and screaming; they’re not resisting it but they’re not going to come up with the design or the philosophy around the design. But once they understand it, they decide, ‘Let’s get going with that.'”

Sorenson said the company also wants to give its hotel owners flexibility in adopting the brand standards to make sure each reinvention has a more local and authentic touch. “Customers liked predictability and consistency before. But it’s harder now because people want that localized experience,” he explained. “These are standards, but we’re telling them [owners] don’t build exactly this and don’t try to create this exactly in your market.”

This reinvention of the Marriott brand, in particular, is especially necessary as Marriott International begins the work of differentiating its now 30 different hotel brands, now that its acquisition of Starwood Hotels and Resorts has finally closed. It’ll be an especially difficult challenge for Marriott to find a way to distinguish its flagship Marriott brand from that of Starwood’s Sheraton, both of which are full-service hotels that operate in similar markets. 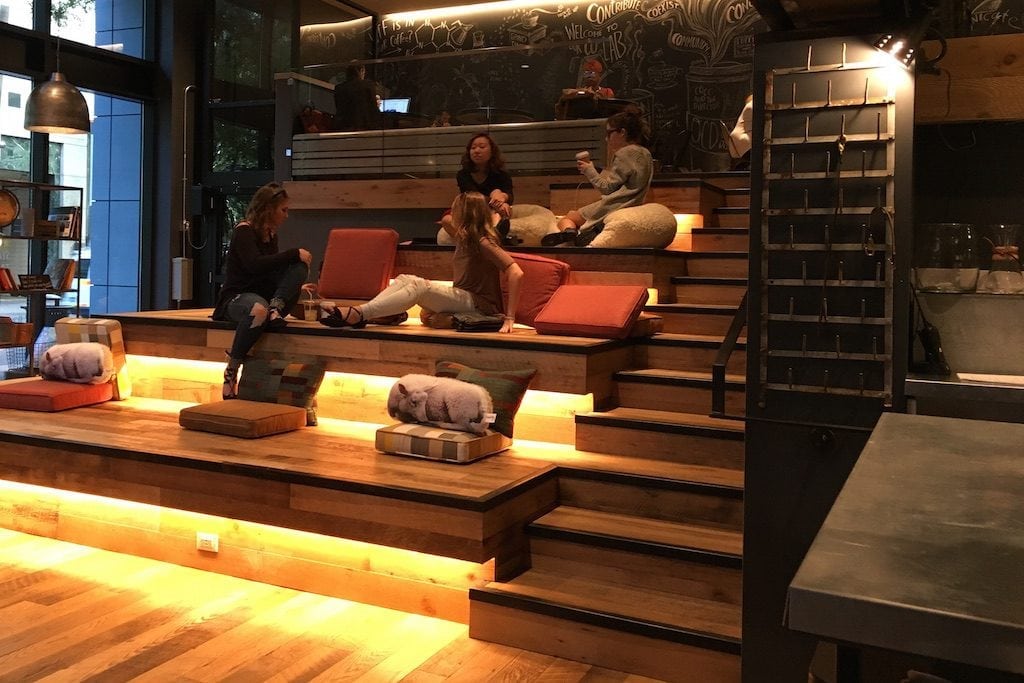 Stadium seating at the M Beta Hotel’s coffee shop, Coco & The Director, doubled as the setting for the hotel’s grand opening press conference.

Both Sorenson and Edmundson said it was too early to call out any definite distinctions between the two brands, but they said it’s one of their top priorities as they proceed with the integration.

Dearing said, “We’ll look for other opportunities [for additional M Beta Hotels]. It takes a special set of circumstances to make it ideal to open this kind of innovation lab hotel. We’re scanning the market. We want to try it in a market that’s different so we can try it in a different environment, so we are keeping our eyes open for similar but different hotels.”

Photo credit: The "Great Room" of the Charlotte City Center Marriott hotel. The hotel is the company's first M Beta Hotel, a hotel that will be used to test out new hospitality concepts. Marriott International