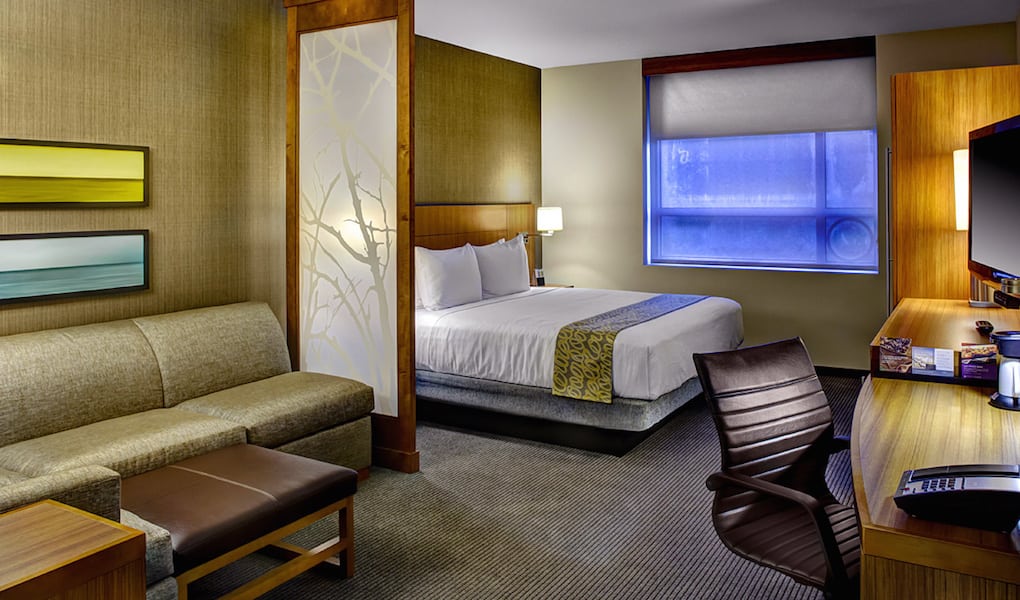 The growth of select-service brands from the major hotel companies isn't slowing down at all, and for good reason: They're easier to finance, build, and there's a clear demand for them. In short, it's a clear sign that hotels are learning to listen to what customers really want, as well as adapt to the new on-demand economy.

Is the full-service hotel on its way to becoming obsolete?

Not necessarily but when you consider the select service brands that the major chains are focusing on, there is a case to be made that full-service hotels are losing their star power.

When onefinestay CEO Greg Marsh spoke to Skift last month, one of his statements — “I think the full-service hotel is dead” — struck a definite chord.

His argument was that as on-demand services continue to grow, whether for ride-sharing or food delivery, the need for the full-service hotel, as it is currently constituted, will no longer exist.

For hotels to survive, Marsh said they have to become low-cost leaders and go “ridiculously” select by charging guests for ancillary services and amenities or they have to go in the opposite direction and do something “truly differentiated” and exclusive.

In many ways, Marsh’s assessment is slowly becoming a reality, especially if you look at which brands major chains appear to be most interested in growing. This was especially evident during each of those hotel companies’ respective earnings calls for the second quarter.

All of these brands fall under the select-service umbrella. These hotels may not have all the bells and whistles that full-service hotel has, like a spa or full-service restaurant, but they do have the basic amenities that most travelers — business and leisure — want in a hotel stay.

They’re not exactly upper-upscale, but they aren’t necessarily economy, either; instead, they generally fall into that upscale/midscale price range.

“I think this is one of those asset types that can please both business and leisure travelers,” said Guy Langford, vice chairman of U.S. travel, hospitality, and leisure leader for Deloitte. “They’re not so basic. Instead of it being limited service, they call them ‘select.’ They provide services to you in specific areas where you have demand. You don’t need a fancy restaurant, so you can book on OpenTable nearby so they have a gym instead, for example. From my perspective, select-service hotels do a better job of satisfying both business and leisure, especially in terms of the [economic] softness we’ve been seeing lately.”

Why Is Select-Service So in Demand?

There are a number of reasons why hotel companies are so focused on building more select-service hotels these days.

“These are growth engines,” said David Loeb, senior research analyst and managing director of hotel brands and REITs (real estate investment trusts) for Robert W. Baird. “They are easier for burgeoning markets where you can put these assets — that’s where demand is moving.”

Not only that, but these types of hotels are favored among hotel developers.

“Tru by Hilton was rolled out and developed so developers could build it,” said Loeb. “Not so Hilton could build it on its own. These are developer- and owner/operator-focused brand initiatives because there’s generally lower investment required and higher returns and margins. It’s a great business model, it’s somewhat less volatile, and it’s increasingly what consumers prefer.”

Langford said that in addition to fulfilling developers’ wants and needs, select-service hotels are a direct response to what consumers want today, too.

When asked if these brands may, in some way, be a response to the popularity of vacation rentals and alternative accommodations providers like Airbnb, however, Langford wasn’t so certain that is the case.

Select-Service for Millennials and Gen Z

Tru by Hilton, Hyatt Place, and Hyatt House may not be nearly as focused on design or luxury as some other brands that aim to appeal to Millennials, but they do appeal to the need for speed and efficiency that many Millennials (and non-Millennials alike) desire in their hotel stays.

With these brands, Hilton and Hyatt are placing more emphasis on designing smart, practical hotels instead of adding in lot of unnecessary frills.

When Hilton announced the debut of its Tru by Hilton brand in January, it was clear the company was focused on the next generation of travelers. There are only two room types, both with 55-inch TVs with plenty of DirecTV channels, but no desks, bathtubs, or closets. Instead, the emphasis is on social spaces and a 24/7 grab-and-go market.

Since the brand’s debut, Hilton CEO Christopher Nassetta has said, “Tru continues to exceed even our most optimistic growth expectations, and we expect Tru to be our largest brand over time.” Hilton has more than 120 Tru properties in its pipeline and another 200 being built right now.

“In the [second] quarter, we averaged five Tru approvals per week and we’re just getting started opening up deals to owners outside of our system,” he said. “We expect the first Tru to open early next year.”

Likewise, Hyatt is seeing plenty of success with its Hyatt Place and Hyatt House brands. Hyatt CEO Mark Hoplamazian said during the company’s second quarter earnings call, “Twenty of the 30 new hotels opened in the first two quarters of this year are Hyatt Place or Hyatt House hotels.”

He also cited Hyatt House, which is a select-service extended stay brand, in particular, saying “… the brand is enjoying strong momentum as our pipeline includes 40 hotels and 6,000 rooms as of the end of Q2 2016, which represents approximately 60 percent of the existing Hyatt House base of hotels and rooms.” J.D. Power & Associates also designated the brand as having the highest guest satisfaction among North American upper extended stay chains.

In November 2015, Hyatt vice president of brand experience for select-service and all-inclusive brands, Steven Dominguez, told Skift, “Hyatt Place is sort of like a Swiss Army knife that allows guest to do just what they want with just what they need. I think overall Millennials are looking to get more out of life, and the hotel isn’t so much the destination, as life is the destination.”

Loeb said he thought Hyatt Place “would be a category killer” when it first emerged in 2005 as a conversion of Hyatt’s newly acquired AmeriSuites properties. More than a decade later, the brand continues to see success.

Not all select-service hotel brands see immediate success, however. Cambria hotels & suites, which Choice Hotels launched in 2007 as Cambria Suites, has struggled to grow as a brand since its debut. In 2014, Chioice rebranded it with an eye toward focusing on Millennials after previously marketing the brand with the tagline, “Where luxury meets style.”

“I’ve stayed in a couple [Cambria hotels] and they are great,” Loeb said. “It’s a lot like Hyatt Place and SpringHill Suites by Marriott, with a very clever design and one that appeals to business travelers and to families.”

According to Choice’s most recent quarterly report filing with the U.S. Securities and Exchange Commission, there are only 25 Cambria properties system wide as of June 30. That’s a relatively small number for a brand that’s been around since 2007. By contrast, Hyatt’s select-service Hyatt Place brand, which was launched in 2012, has a total of 215 properties as of June 30.

Why has Choice struggled to grow Cambria? Loeb thinks it may have something to do with the fact that “Choice’s customer base and loyal guests tend to be price-sensitive.” He said, “This is a more expensive option [than Choice’s other brands.] If you put that product in the Marriott system, for example, it would be very successful because they have hotels with a similar product footprint. It’s tough to get a Comfort Inn guest to trade up to a Cambria, but they might see more success in an urban market where there aren’t more lower-priced options.”

“These signings are consistent with our strategy of growing the Cambria brand in high-profile locations within the top travel markets across the country, further enhancing the long-term brand visibility with the target upscale customer Choice is actively recruiting to with the previously discussed changes to our loyalty program,” Joyce said.

Earlier this year, Choice revamped its loyalty program, Choice Privileges, which currently has approximately 27 million members. The new program adopts a more retail-driven approach to loyalty that’s also central to the member programs at peers such as Wyndham and Red Lion Hotels, with instant rewards.

Joyce also noted that the company advanced $67 million to expand the Cambria brand specifically via joint-venture investments, loans, lending, and site acquisitions, as well as recycling $18 million worth of these investments.

Another hotel company that has struggled to grow its select-service brands would be Starwood Hotels & Resorts. Many suspect that the relatively slow growth of its Aloft, Four Points by Sheraton, and Element brands contributed to the abrupt exit of its former CEO, Frits van Paaschen, in February 2015.

Although those brands, especially Element, have seen more pickup in recent months, they still have a relatively small footprint in terms of Starwood’s overall hotel portfolio. As of December 31, Starwood’s three select-service brands totaled 334 hotels, or about 26 percent of its overall collection of hotels. Marriott and Hilton, by comparison, have nearly 3,000 and more than 2,000 select-service hotel properties, respectively.

Will Select-Service Continue to Be a Solid Investment?

Given the relative success and challenges of launching a select-service brand, is it still worth it for big chains? The short answer? Yes, say Langford and Loeb.

“Especially where we’re at right now in the current hospitality cycle, by having that type of asset in your portfolio, it gives you more flexibility in managing your costs and how you flex those costs when there are changing demand dynamics,” Langford said.

Loeb said, “I think that the brands that have emerged as being the next great brand over the last couple generations has been select service, and that will continue. Just look at Courtyard by Marriott, for example — it’s been the next great brand for a long time. Look at the growth of Hampton Inn by Hilton. All of these are difference brands with different perspectives on select service. That’s where innovation is going to come from.”

Photo credit: Hyatt Place Delray Beach. Hyatt Hotels and its hotel peers have seen relative success in growing their select-service brands like Hyatt Place and they don't seem to be backing down from investing into them. Hyatt Hotels & Resorts