7 Charts Showing Americans’ Travel Intentions for 2016 and Beyond MMGY's annual study shows that Americans are resilient in the face of terrorism and other adverse factors at home and abroad and are also planning to make 2016 one of the better years for travel in recent memory.

Many travel brands believe 2016 will be one of the better years for American travelers for domestic and international trips and spending since the Great Recession began in 2008.

Several signs point to that scenario already playing out. (Even if it may have reached its peak, as some argue)

The U.S. National Travel and Tourism Office, for example, said this week that U.S. travelers spent more than $55 billion on trips abroad between January and March compared to spending more than $54 billion between January and March 2015 (a one percent increase year-over-year). And according to the U.S. Travel Association, $55 billion is half of the total amount ($110 billion) U.S. travelers spent on trips abroad in 2015.

One of the biggest affirmations: respondents part of MMGY Global’s 2016 Portrait of American Travelers study said, on average, they plan to spend $5,048 on vacations during 2016. That’s an 11.5 percent increase from what they said they would spend when MMGY asked the same question in 2015.

MMGY’s annual study on American travelers, which has been conducted for more than 20 years, surveyed nearly 3,000 active leisure travelers online during February 2016. Respondents live in the U.S. and had an annual household income of at least $50,000 or more with 815 respondents having an annual household income of $125,000 or more. They also took at least one leisure trip of 75 miles or more from home during the previous 12 months and stayed in overnight accommodations. Respondents were nearly evenly distributed between males and females and between all generations.

“Traveler intent and consumer confidence are in lockstep this year,” said Clayton Reid, president and CEO of MMGY Global. “We only survey people with incomes of at least $50,000 because these are people who have more money to travel and who do travel. With that in mind, not everyone will travel more as our data doesn’t account for American travelers that make less than $50,000 a year.”

The following charts represent respondents’ travel intentions for 2016 and the next two years for U.S. and international destinations.

Chart 1: Travelers intend to take more vacations in 2016 than they did in 2015. In the survey, travelers were asked about their intention to travel more, less or the same in the year ahead compared to the previous 12 months. Some 28 percent of travelers indicated an intention to take more vacations and 14 percent said they plan to take fewer. This represents a 10-year high that surpasses the previous record, a pre-recession 11-point increase in travel intentions reported in 2007 and 2008. 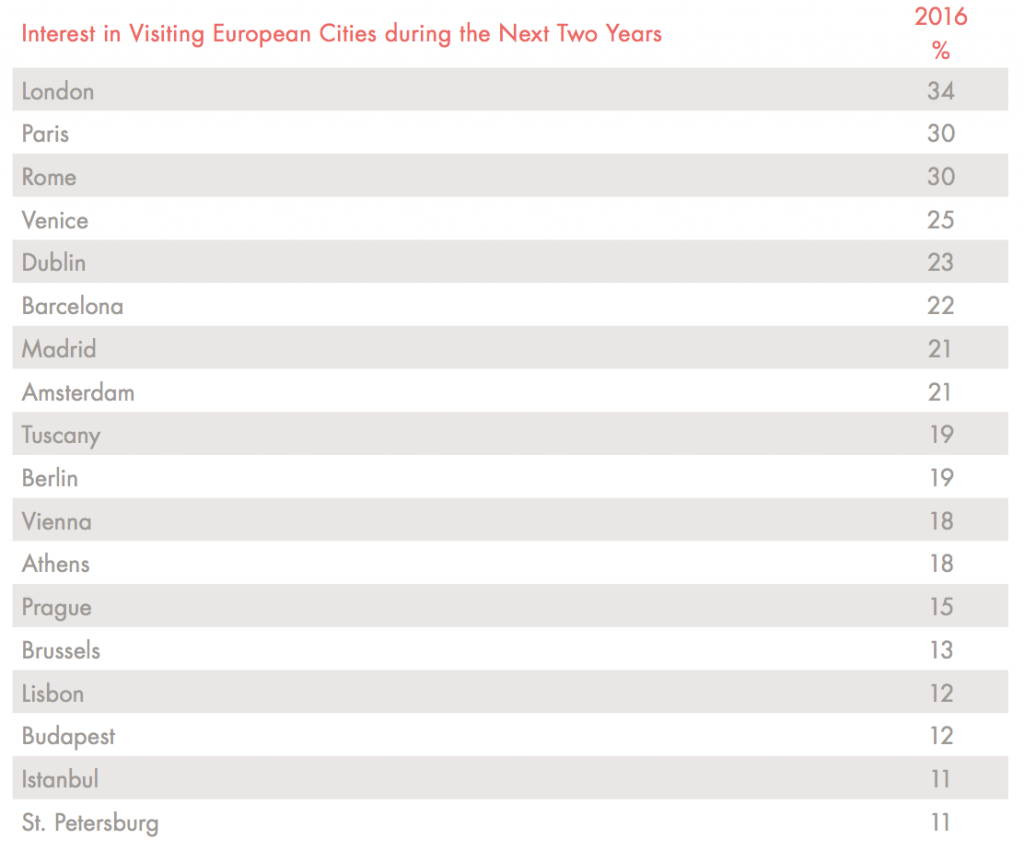 Chart 3: Italy remains the most interesting European country to visit for U.S. travelers. In general, interest either remained or increased across the board for the countries below from 2015 to 2016, even with France (two percentage point increase year-over-year). The notable exception is Belgium, with Brussels having been the site of a terrorist attack in March, and that country saw a one percentage point decrease from 2015 to 2016. Chart 4: Overall, Europe remains the most interesting region for U.S. travelers with 53 percent of respondents indicating interest in the region this year. This reflects U.S. travelers’ actual travel behavior as Europe is the most visited region by U.S. travelers (excluding Canada and Mexico) with more than 10 million U.S. arrivals in 2014. The Caribbean is the second most visited region by Americans with more than seven million U.S. arrivals in 2014.

Some 12 percent of respondents said they’re interested in visiting Cuba during the next two years. That’s compared to 11 percent when MMGY asked the same question in 2015 and nine percent in 2014 before the U.S. and Cuba normalized relations. Destinations like the Bahamas, U.S. Virgin Islands and the British Virgin Islands saw slightly larger increases in interest. Chart 7: The chart below shows the states respondents have historically indicated the highest levels of interest in since MMGY began asking this question. Of the states listed below, all of them received more interest in the survey in 2016 than they did in 2015 (Arizona’s interest was about the same year-over-year). California and Florida had the largest percentage point increases in interest from 2015 to 2016.

Photo credit: Tourists at Buckingham Palace in London for the Changing of the Guard ceremony. London is the European city that garnered the most interest in a recent study of U.S. travelers. Dan Peltier / Skift