Expedia Gained U.S. Market Share After Acquisitions But Lost It Everywhere Else Expedia's acquisitions in 2015 made it more of a U.S.-focused company, a weakness it intends to rectify in coming years. Meanwhile, the market share impact of its buying spree won't really be felt until 2016 and beyond.

Before examining what the trends mean, let’s take a look at two charts that Expedia published about its own market share, based on gross bookings (the total value of the travel booked), in the context of what Phocuswright estimates is a $1.4 trillion global travel market in 2016 versus the $1.3 trillion travel market in 2014. Expedia published the first chart in an investor presentation on February 5, 2015 and the second chart a year later on February 10, 2016. 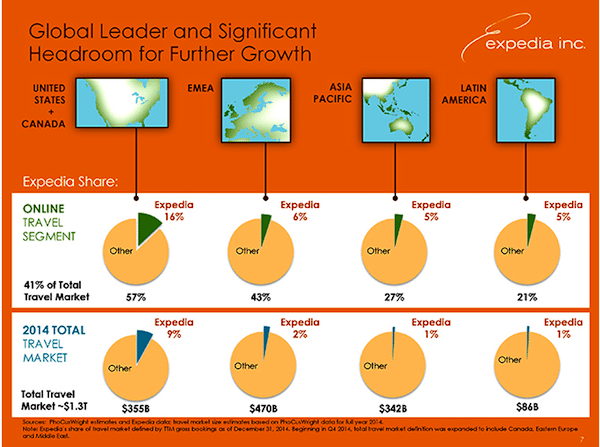 Takeaways from the Charts

With all of Expedia’s 2015 acquisitions, including Travelocity in January; buying out the remaining 25 percent of its AirAsia joint venture in March, Orbitz Worldwide in mid-September, and HomeAway on December 15, you’d think that Expedia would have gained more than 1 percentage point of U.S. and Canadian online market share, and more than 1 percentage point of the online and offline U.S. and Canadian travel market, respectively.

To pick up a 1 percentage point gain in the estimated $388 billion U.S. and Canadian total travel market, Expedia would have had to increase its domestic (and Canadian) gross bookings by $3.88 billion. Actually, Expedia’s domestic gross bookings in 2015 increased by $7.8 billion to to $37.4 billion, which would be about a 2 percentage point gain, all things being equal.

Another factor to be considered about Expedia’s relatively small U.S. and Canadian market share gains is that perhaps other players, such as Booking.com and hotels marketing the benefits of direct bookings for consumers, could be chipping away at Expedia’s share.

Of Travelocity, AirAsia and Orbitz Worldwide, the latter would be the heaviest hitter in terms of potential gross bookings’ growth for Expedia but Orbitz’s numbers only kicked in for Expedia with two weeks to go in the third quarter. Orbitz contributed $2.8 billion in gross bookings globally for Expedia in that time period with the bulk likely skewing toward bolstering Expedia’s U.S. market share.

Considering that Orbitz, before becoming part of Expedia, did $12.4 billion of gross bookings in 2014, it is clear that its market share impact won’t begin to be fully realized until 2016 and beyond.

Expedia’s 2015 acquisitions, especially Travelocity North America (Travelocity’s Europe-based Lastminute.com was not part of the deal) and Orbitz skewed toward being U.S.-centric and Expedia acknowledges that it is too U.S.-dependent.

In another part of the investor presentation that Expedia released last week, it shows that Expedia’s domestic revenue became more U.S.-lopsided in 2015, 56 percent last year versus 53 percent in 2014.

While Expedia sold its controlling stake in China’s eLong in May 2015, Expedia lost a percentage point of online market share in 2015 in both EMEA and Asia Pacific. Ctrip, which in January 2016 invested $180 million for a 26 percent stake in India’s MakeMyTrip and now controls 45 percent of Qunar, may be making some inroads in Asia Pacific and it is possible that Booking.com and Agoda are picking up some slack in Europe and APAC, as well.

The Online Travel Market is Gaining Share Around the World

As the total global travel market grew 7.7 percent to an estimated $1.4 trillion in 2016, according to Phocuswright projections, Expedia’s 2016 investor update shows that the online travel market is making share gains in every region of the world — except the U.S. and Canada.

While these travel market gains by region are mere estimates, the trajectory shows that the total travel market is growing across the globe and is very competitive.

Photo credit: Expedia is trying to gain market share from New Orleans to Nassau and it has enlisted Orbitz to spur some growth. Orbitz