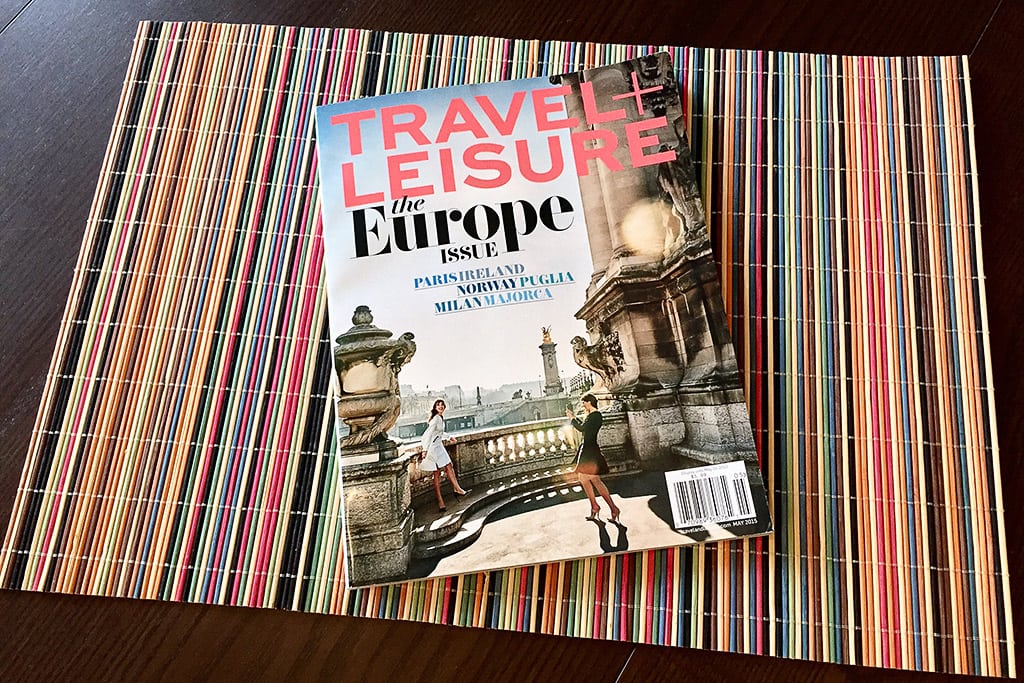 The May issue of Travel + Leisure is part of a broader relaunch that also includes the website. The new homepage of travelandleisure.com The full cover of the May issue of Travel + Leisure.

Seven months after taking over the top editorial position at Travel + Leisure, Editor-in-Chief Nathan Lump‘s vision for the consumer travel brand is ready for the public.

Today the consumer travel title revealed both a new website at travelandleisure.com and a top-to-bottom gut job and restoration of the print version, which begins arriving in mailboxes and on newsstands later this week. Both are an attempt to provide an experience that’s “More Immersive, more experiential, and more inspiring,” Lump says.

The redesign is the first significant change to the publication since Time Inc. purchased the title from American Express Publishing in September 2013.

As opposed to last spring’s revamp of the print version of rival Conde Nast Traveler, which was a complete reinvention of the title, the new Travel + Leisure is more of an evolution. This can be traced partly to Lump’s history at the title (he worked under previous Editor-in-chief Nancy Novogrod) and the more amicable transition process at the title.

There’s been a staff change to go with the redesign. According to Lump there are no longer any roles at the magazine solely dedicated to print. This allows T+L to, as Lump describes it, “Adopt a high-velocity publishing model.” For the digital side this means moving from publishing a few stories a day to over twenty. Lump says that this will be generated in-house and by a paid correspondent network.

Although the logo remains the same, the insides have changed completely, from sections to fonts, to the approach to photography. The old Radar section at the front of the book is now Here & Now, and it is no longer filled with tidbits of info readers likely saw on the web two months earlier.

The old Trip Doctor section is now Upgrade, and continues to offer reader advice and industry news, while The Guide is a reader service package that takes on one topic, in this issue “The Europe You Don’t Know.”

The biggest change is the Beyond section, which is a mix of short pieces at the front of the book. Instead of random snippets, it reads like a bonus feature section, with shorter pieces focused on “more actual travel,” as Lump described.

Weighing in at 196 pages, it’s one of the thicker travel magazines we’ve seen in some time. According to Lump it’s the biggest May issue since 2008. Advertising pages between January and May of this year are up 8% year over year, and 2014 ended 2.5% over 2013. According to the Publishers Information Bureau, the combined print and digital audiences for all major consumer travel titles have increased since last summer, with Travel + Leisure showing the largest increase.

It’s rare to do a print and web redesign at the same time, which is why even though the website has gone through a complete overhaul, they’ll continue to make changes in the coming months. “It was important not to do one at a time because it’s impossible to think strategically about one product without the other,” says Lump.

Like other redesigns, the new T+L website goes for bigger pictures, less clutter, smaller navigation. The influence of Digital Director Sarah Firshein, who was hired from Vox Media, is apparent in features like its parallax scroll experience. They’re also doing what they can to keep users on the site, from more immersive slideshows which lead users into additional slideshows, to a continuous scroll on stories, which they’re rolling out soon.

The story pages are clutter free and focused on the words; outside of ads at the top of the page and to the right, you’ll only find text and images. Slideshows use a giant lightbox format that integrate ads at different points, but otherwise stick to just images and descriptive text.

You’ll still find some sections in the old format, like the Awards section, which will be moved over to the new format in the coming weeks.

Subscribe Now
Tags: magazines, travel + leisure
Photo Credit: The May 2015 of Travel + Leisure corresponds with a redesign of the brand's website, too. Skift