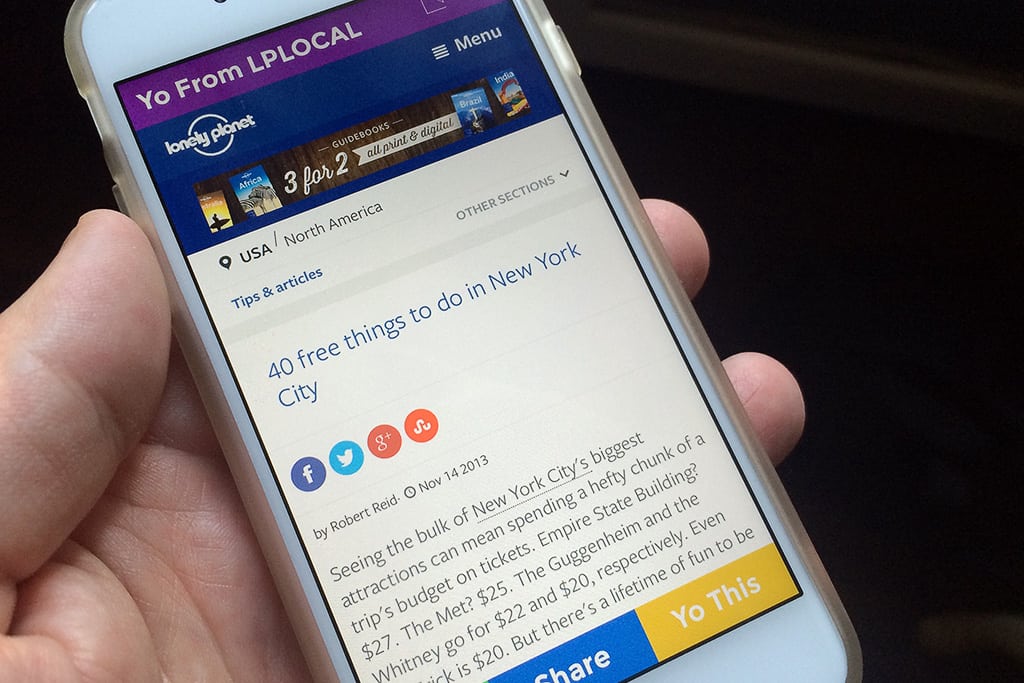 Increased competition and a higher cost of discovery on Facebook and Twitter mean that travel brands are looking elsewhere to connect with mobile consumers.

They are increasingly charmed by push notifications on mobile for their ability to appear on a smartphone screen without clutter — and that’s a powerful tool for brands to cut through the mobile and social media noise.

Although notifications are not meant for the two-way conversations we’ve come to expect from social networks, they provide another mobile touchpoint for brands to reach people who like a product and don’t mind hearing more about it from time to time.

One platform that is connecting companies and people through mobile notifications is Yo. Danny Hakimian, Yo’s director of marketing, told Skift that Yo has 3.5 million users who have collectively sent around 150 million Yos since launch, doubling users in the last six months.

Surprisingly, Yo has grown in popularity with publications like Lonely Planet, Buzzfeed, Huffington Post, and TechCrunch, to name a few.

When users visit the Yo website, it asks for a mobile phone number to message a link to download the app. Once downloaded, users can subscribe to various publishers and receive an audio/visual message saying “yo,” as well as receive periodic pings of content that they can share on social or Yo back to their Yo fellows.

Sebastian Neylan, social media communications manager at Lonely Planet, offered some of the reasoning behind implementing Yo, “We get approached by many platforms. I’m open to considering things, but I don’t want to overlap with what we already do. There was a surprise element to it, that you don’t know what you’re going to get, its minimal nature and easy implementation.”

Lonely Planet has two accounts, one that serves up daily notifications of its trending, most popular stories or its sponsored content. The other is an on-demand “LPLocal” information channel for travelers who have just landed in any of Lonely Planet’s top-tier destinations like New York, London, and Rome, and are looking for things to do, see, stay, or eat based their location.

There are 6,500 subscribers on Lonely Planet’s Yo channels. On programming Lonely Planet’s content, Neylan said, “There are some fresh stories and some more evergreen, it depends on the city and person’s location.” Currently, it promotes evergreen content to users rather than time-sensitive information.

If you're on @YoApp subscribe to our 'LPLOCAL' feed for geo-targeted tips on the city you're in — we just added Kyoto and Tokyo! #lp

Another travel company on this platform that relies on location is a South African online booking site, Travelstart. Instead of pushing stories, it promotes weekend flights near the user, based on the booking site’s top five destinations.

When Skift asked Travelstart why it sought a brand presence on a platform with such a small user base, Russell Jarvis, Travelstart’s content manager said, “The low numbers do not concern us as Yo forms part of our drive to be innovative in 2015.”

Travelstart’s app is location-specific, but after Skift sent a Yo (from New York), it sent a message back to a site within Yo’s app that provided Miami, San Francisco, Las Vegas, and Cancun as cities for a weekend travel — which was helpful — but upon choosing a city, it searched for flights and provided the available itineraries priced in South African Rand instead of U.S. Dollar.

Sergio Mello, head of innovation at Travelstart claims, “The point of this app integration is to extend the boundaries of our reach and break engagement barriers with the youngest generation of travelers. They may not book today, but will never forget that Travelstart is on Yo, just like them.”