The City Council in New York City held a nearly eight-hour hearing yesterday to discuss the state of short-term rentals in the city, and Airbnb and critics of the service were out in force to advocate for their respective sides of the argument.

Airbnb would like to see the state change a law which makes it illegal to rent an entire apartment for fewer than 30 days a month in New York City. Multiple studies have shown that the majority of the activity on Airbnb involves the host breaking this state law. Many city leaders have asked Airbnb to help the city prevent the activity from taking place, which the short-term rental site has declined to do.

As before, the discussion centered on what the short-term rental business looks like in New York City. Is it people occasionally renting out the homes where they live in order to make ends meet, as Airbnb contends? Or is it there an epidemic of illegal hotels that used to be residential housing, as is often heard from the other side.

When it comes to the activity on Airbnb, both sides have it wrong, according to data derived from the site’s listings.

Last February Skift revealed its deep dive into Airbnb’s business in New York City. The series of stories explored the real numbers behind the sharing success, 10 of the biggest hosts, and the most popular neighborhoods.

The Attorney General’s office used this data dive, as well as Skift’s analysis, to defend its subpoena of Airbnb in a hearing in April.

In April Airbnb completed a vast sweep of its New York listings to remove many listings controlled by hosts with more than one property on the site. These users, who were some of the most highly reviewed and recommended hosts on the site were described by Airbnb as “bad actors.” Many of them are currently suing Airbnb for turning over to the Attorney General information about their activity.

Of the ten “super hosts” that we identified in February, seven were removed. Of the three that remain, one is a legal hotel using the site as a marketing platform (a smart trend we’ve seen elsewhere), and the other two are renting out multiple rooms in what appear to be illegal hostels.

The Return of the Super Host

But since April a new crop of super hosts have returned.

Tom Slee, a writer about technology and politics who is currently working on a book about the sharing economy (and who has worked with Skift on Airbnb data in the past), compared Airbnb listings for November 2014 and November 2013. Among other findings, his work reveals the hosts, below, who have more than ten listings on the site. More than 2,700 hosts have 2 or more listings.

In November 2013, there were 95 hosts that had ten or more listings on the site. After the purge that took place in April 2014, the number dropped to less than ten. That number has creeped up again to 22.

Airbnb Hosts With More Than 10 Listings

In addition to the super hosts, the number of available listings in the city increased by nearly 25% between November 2013, going from 20,623 to 25,761. This increase is significant as the total number of listings on the site had dipped to under 15,000 following April’s purge. 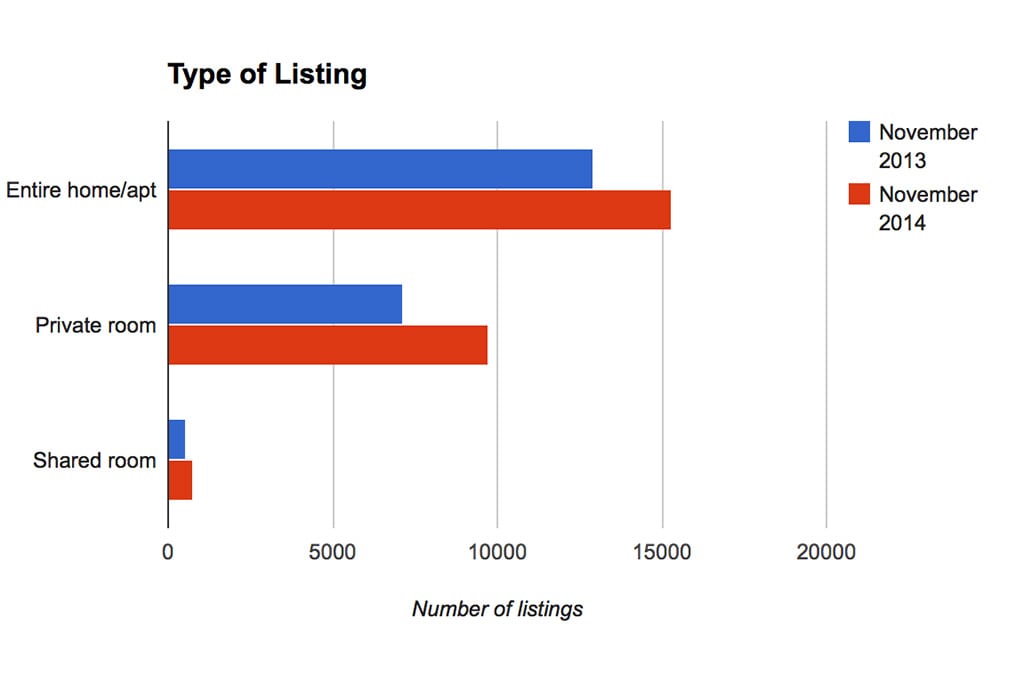 The percentage of listings that are for “Entire home/apartment” — which are in most cases illegal — dropped year over year, from 62% of the site’s listings to 59%. The Attorney General’s report in October, though, revealed that the rental activity of this type of listing was responsible for a greater share of bookings on the site. Without access to transaction data, though, it’s not possible to determine what this activity was like in November.

Slee’s data does not reveal anything that could be considered an illegal hotel, which once had free reign on the site. While it is possible that users could be using multiple profiles to rent out multiple units, without access to financial information that would be difficult to pinpoint.

Act the Council hearing, Councilman Jumaane Williams, chairman of the Housing Committee, asked David Hantman, Airbnb’s Global Head of Public Policy, “Why would the one thing that makes the most sense, which is whether it’s legal or not, be the thing you’ve done the least about?”

Hartman told the committee that Airbnb has not looked into whether any of its listings in New York may be breaking the law.

Airbnb did not respond to questions from Skift about whether it would be removing hosts will multiple listings.