The Perfect Place to Learn the Changing Global Trends in Travel Living and learning about the global megatrends we write about daily on Skift -- that was the main reason why we went to Iceland. It is the perfect crucible for a crash course in the changing global business of leisure travel. In our mind, this is the most iconic image of our Iceland trip, with the full team on top of the Eyjafjallajökull volcano in south Iceland. Meeting the team at Promote Iceland and listening to a presentation about marketing the country. Our stay at the cool Loft Hostel, where the lobby serves as a meeting point of locals and tourists alike. 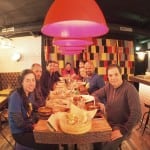 Our lunch at K-Bar, a Brooklynization-of-the-world restaurant in Reykjavik. Climbing the deep snow for hours and hours, on the way to the top of the volcano in muscled out Superjeeps. These Superjeeps are super serious and super fun. We lucked out big time on the weather front too! In which we decided to do “Awkward Travel Trade Magazine Editor Photo Poses”, while out on the volcano in Iceland. Climbing the melting Vatnajökull glacier, getting a first hand lesson in climate change and how it is affecting the world’s glaciers. In one of the caves in the Vatnajökull glacier. On the black sand beaches of South Iceland. 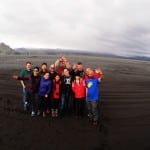 The tour drivers/guides were incredibly well versed and trained, and it made the whole experience that much better for us. Visiting the amazing Harpa convention and cultural center in Reykjavik. 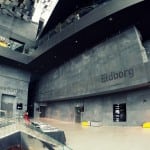 Designed in part by famous Danish-Icelandic artist Olafur Eliasson, Harpa has become a tourist destination beyond its events. The full Skift team, on stage at the main giant concert hall at Harpa. Gorgeous views of the Reykjavik harbor, from inside the Harpa Center. The serious business of discussing the future of Skift, at the Hlemmur Square lounge area. The Skift team lunch at the luxury Glymur cottages inside the Hvalfjörður fjord in West Iceland. 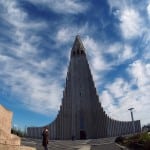 The famous Hallgrímskirkja church in the middle of Reykjavik, the most iconic landmark in a flat city. Of course, we had to go visit the photogenic Iceland horses! We may or may not have lost a team member in a fjord in Iceland, we can neither confirm nor deny. The famous Seljalandsfoss waterfall in south Iceland, with a rainbow inside it! Most refreshing thing you’ll ever do in your life: drinking directly from Icelandic firehose, so to speak.

Or why Skift went to Iceland.

Skift is coming up on being two years old in a couple of months. With our team 10 strong now, we went on a rather unusual company offsite, our first ever: Iceland. As startups go, that was probably among the coolest destinations any early stage startup has ever been to, and there were a few reasons why we did it, in addition to the obvious team-building part of it.

One, we’re Skift, we’re the ones who report on global travel trends (see here, here, here and here, for example), and for us, our first company offsite had to be a cool destination which few other companies as a group had been to.

Second, attracting talent as we grow is a hard and full-time task in a very competitive startup city like New York, and our Iceland trip is indicative of the intense-but-fun culture we’re building into the company. We wanted the world to see it play out live, primarily in social media.

But the more interesting reason was to learn about the changing global business of travel. Iceland is the perfect crucible of a lot of global travel trends we cover on a daily basis on Skift, converging in the tiny country in so many ways over the last few years.

I went to Iceland in 2010, a week after the famous Eyjafjallajökull volcano fully stopped, then again in 2012, and now went back in 2014, so I have seen the changes in the country first hand. No one else in our team has, even though we have covered these changes since Skift’s start in 2012.

The less obvious part was the larger global travel trends playing out in country where for the first time in its history, tourism is now officially the biggest foreign exchange earner, surpassing its traditional industry of fisheries and aluminium production. Also the first time for in its history, Iceland will likely cross 1 million foreign tourists in 2014 — more than three times its tiny population of about 320,000 — growing at a crazy rate of about 20 percent per years for the last three years, and likely higher this year.

We wanted the team to see those changes play out in person, and we got plenty:

Where should the Skift team go next year for its annual offsite, which other destination offers a great immersive learning experience a la Iceland? Let us know in comments below or email us.

Photo credit: The Skift team, on top of the Eyjafjallajökull volcano in Iceland. Photo by Rafat Ali