Destination marketing organizations (DMOs) are diversifying their brand communications and event marketing to create more content to distribute more frequently across their spectrum of digital channels. Tourisme Montreal is leading the trend in North America with multiple targeted websites, special events and collaborative partnerships with content providers and travel suppliers.

According to Emmanuelle Legault, VP of marketing at Tourisme Montreal, the DMO was the first of its kind to launch an official destination blog to supplement its brand.com website in 2009. Last year, Montreal was the first in the industry to launch a dedicated meetings/conventions blog to attract more of that lucrative market.

There is also a conscious shift to align marketing and communication efforts around travel behaviors versus traveler types, required by the rapid fragmentation of traditional consumer travel patterns.

“We don’t talk about segments of travelers first anymore, we talk more about niches and motivations to travel,” says Legault. “And then within those niches, we look at the segment that would be interested in them, where there’s a good fit within the city and what we have to offer.”

Millennial/Gen Y demand for more experiential travel played a role in conceptualizing those themes and the blog’s overall design and direction. Although, once that was set in motion, Legault wasn’t exactly sure how you’re supposed to talk to Millennials.

“When we started building our communication strategies, we looked at the product itself, and then we started talking about Millennials that were a good segment for that product,” explains Legault. “And we started thinking, who are we to present the destination and to show the USP of those niches? For Millennials, who are all about authenticity and experiences, how can we get across our message but through another voice?”

Legault says she started working with bloggers and publications specific to each niche, like the online music portal Consequence of Sound. Montreal invited their music writers to scope out the indie bands around the city and talk with people involved in that scene.

“They are the experts and they’re the ones who talked to the Millennials,” says Legault. “They’re the ones who have the good ear for the way Millennials talk about music. Another example is the culinary niche. As we know with Millennials, they’ll skimp on accommodations but they won’t on good culinary. So then we started working with sites like OpenTable to promote the brand, but in the most chic and inspiring way that we could.”

Montreal also contracted food bloggers to create posts for the leisure blog, such as local girl Mayssam Samaha who runs the popular Will Travel For Food blog. Samaha writes about everything from Montreal’s top 10 sandwich shops to posts featuring Google Maps embedded with the city’s best terrasses.

For the meetings and conventions blog, meanwhile, its biggest value is the ability to communicate directly with corporate and association planners who are notoriously busy and sometimes gun-shy about taking calls from DMOs. Established planners are approached by an endless stream of travel suppliers because of their significant purchasing power. Montreal, however, sees whitespace among the younger planners.

“We were surprised, we found that a lot of Millennials are trying to break into the meetings market, who utilize social media, who read blogs, who don’t want advertorials to read,” says Legault. “So that’s why we decided last year that we should start a new blog and try to bring added value to our customers, you know, bring them to our content, and then that gives us a chance to engage with them.”

The investment is starting to pay off, and now planners are reaching out to Montreal’s convention services staff.

“What we’re seeing is a lot more time spent on the blog and a lot more comments than we used to get, so we’re starting to engage with them,” explains Legault. “The fact that we took an approach that’s more content-oriented, and provides more added value to them, allows us to always be in the top of their mind. And then when they do have a question, they are contacting us to get more information.”

In early 2013, Tourisme Montreal created a crowdsourced “Montreal Moments” campaign and corresponding #MTLMoments hashtag on Twitter, Facebook and Instagram. Postcard-size cutout frames were mailed to local business and media influencers, and large permanent frames were placed around the city where people could pose and take photos of themselves through the frames.

Also part of the initiative, Montreal invited travel bloggers in all of the various travel niches to explore the city, blog about their experiences and promote their posts with the #MTLMoments hashtag.

Legault says the three main priorities behind the campaign focused on creating a buzz that was “organic, decentralized and authentic.”

It worked out well. More than 24,000 hashtagged photos were posted on Instagram, and over 14,000 Twitter mentions were recorded. The Montreal Moments videos have notched over a third of a million views on YouTube, and the dedicated #MTLMoments webpage attracted over one million views. Together, all of this buzz resulted in a 15% surge in traffic to Tourisme Montreal’s website and blog compared to 2012.

There was also an especially sharp rise in social media followers from February through December 2013: 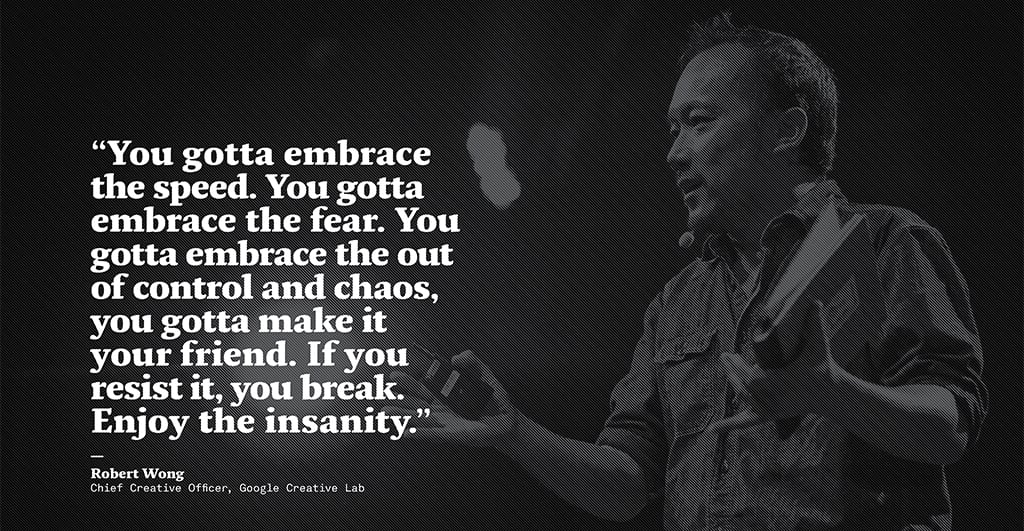 Similar to the wildly popular SXSW transmedia event in Austin, mixing tech, music, media and events, C2MTL inspires the same type of participatory, mind-expanding experiences with conceptual venues and Cirque-inspired parties. Think of it as Burning Man for the businessman.

“It’s important to remember that C2MTL is not a conference simply for creatives; it’s about teaching business people how they can bring creativity into their day-to-day job,” says Legault. “It doesn’t matter if you’re a law firm, in pharmaceuticals or part of the aerospace industry. No matter what your field, it’s creativity that helps business evolve, and C2MTL opens the doors to better understanding and presenting that dynamic.”

For an example of the type of creative collaboration discussed at C2MTL, check out the conference blog post about Nike’s entrance into the Rio de Janeiro market ahead of the World Cup and Olympics: A (True) Story of (Real) Brand Engagement.

What’s interesting here, by co-creating the C2MTL conference, Tourisme Montreal proactively developed a wellspring for innovative content to share on its digital platforms to attract like-minded thought leaders in business, culture and the arts.

“Our goal was to reinvent the business conference,” says Jean-François Bouchard, president of Montreal’s Sid Lee creative agency who helped spearhead the development of C2MTL. “We also saw this as an opportunity to bring together the C-suite from all business sectors and industries, in what could become something of a global innovation summit in Montreal.”