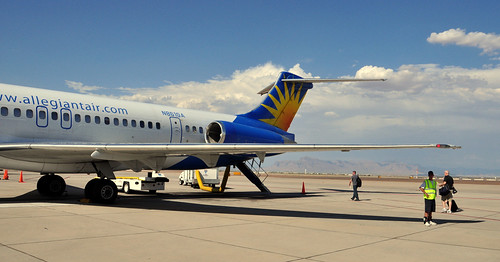 Allegiant’s earnings are bolstered by its vacation packages as well. Photo by JL Johnson.

It was the company’s 39th straight profitable quarter, and earnings beat Wall Street estimates of 77 cents a share.

The third quarter, which ended Sept. 30, typically is an off season for airlines, but this year’s was the first full quarter for Allegiant service to Honolulu from Las Vegas and Fresno, Calif.

“Hawaii is a new market for us, so we’re learning demand trends and how to optimize our schedule,” Allegiant President Andrew Levy said. “We get smarter as we learn more.”

One of the things Allegiant learned quickly was that its announced service between Monterrey, Calif., and Honolulu had fewer bookings than expected. The company canceled the route before it ever had a flight.

Several other Hawaii routes from the western U.S. are scheduled to begin later this year and early next year.

The third quarter also was the first full quarter of the company’s use of its Boeing 757 jets, which helped lower costs per passenger because the planes are more fuel-efficient than its MD-80 jet fleet.

During the quarter, Allegiant also completed retrofitting 40 MD-80s with 16 more seats per plane, boosting capacity. The airline carried an average of 143 passengers per flight in the quarter compared with 136 the same quarter a year ago.

The company will get an additional capacity and efficiency boost next year when it begins flying its recently acquired Airbus A319 jets.

The average fare for scheduled service fell from $84.94 last year to $82.30 for this quarter and the load factor — the percentage of seats sold to paying customers — dropped 2.1 percentage points to 90.1 percent.

But ancillary service sales, fees for baggage, carry-on bags and preferential seating, hit an average of $37.05 per passenger. Allegiant imposed a $35 fee for carry-on bags in May.

Allegiant Chairman and CEO Maurice Gallagher said the fee accomplished one of the airline’s goals of pushing customers to check bags, speeding boarding on most flights.

Levy said the company also is making more money on its Las Vegas vacation packages, though it is selling fewer of them.

“We’re actually turning business away to make more money,” Levy said in a conference call with analysts. “There’s no lack of demand into this town, and we’re pricing it in a way that we are ultimately more profitable.”