Chinese tourists must spend, spend, spend, during trips to the UK to help lift the country out of recession, according to a report by the British tourist board. 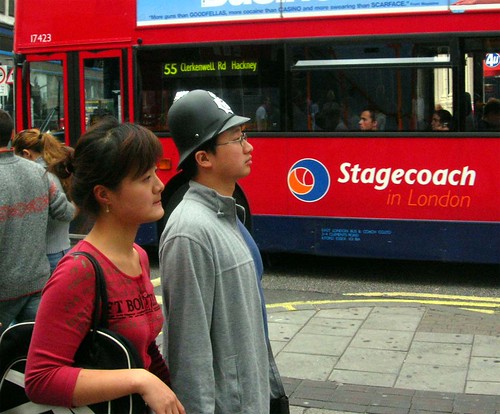 Up against a stodgy reputation and few domestic designer brands, VisitBritain sends culture connoisseurs to convince Chinese why they should visit Britain. Photo by Gideon.

France and Italy have aspirational consumer brands such as Chanel, Louis Vuitton, Hermès, Christian Dior and Prada, the report says, while Germany’s reputation is enhanced by its cars and consumer electronics. However, the only British brand with any profile in China is the 156-year-old fashion house founded by Thomas Burberry.

VisitBritain’s strategy to boost tourism from China focuses on promoting high-end consumer culture while dispelling the myth that the UK is home to unwelcoming monolinguists whose goods are poor value for money. It also repeats concerns that the UK’s tough visa policy deters potential visitors from China, Russia, India and the United Arab Emirates.

A Best-of-British delegation of retailers, tourist attractions and sports organisations including Harrods, Selfridges, the Historic Royal Palaces and the Wimbledon Lawn Tennis museum will fly to Beijing next month in the Olympics afterglow, while setting a new tone that contrasts sharply with the Cool Britannia of the Blair era, which promoted Britpop, art and edgy fashion.

Also in attendance will be Value Retail, owner of Bicester Village, the designer shopping outlet in Oxfordshire, which hopes to lure wealthy visitors out of London and into the countryside. Most tourists visit only the capital.

VisitBritain has set a target of 40 million foreign visitors by 2020, 9 million more than today. Tourism accounts for about 9% of GDP and jobs and is the third-largest foreign-exchange earner, behind chemicals and financial services, its report says.

“Seen from a Chinese tour bus, the continent of Europe is not so much an ancient collection of cities and nations as a glittering emporium stocked with brands,” the report adds. “However, Britain’s retail and consumer brands fare poorly relative to their competitors.”

Language barriers are also a competitive issue, says VisitBritain. “In France, shop assistants at the Galeries Lafayette department store speak Mandarin, while hotels with many Chinese guests provide television channels in their native language and teapots (in addition to coffee makers) in their rooms,” the report says.

“In Britain, while some of the leading players such as the West End stores and Hilton hotels have started programmes to welcome Chinese visitors, there is still much to be done to ensure tourism businesses around the country understand the expectations of international markets.”

Despite the global recession and European debt crisis, the shrinking economies of France, Germany, Spain and the US account for a third of the money spent by tourists in the UK. The number of visitors from Australia, Norway, Denmark, Sweden and the UAE has increased.