Skift Take
The lunatic fringe’s obsession with killing national rail program has again made its way into a national political platform. Why this group isn’t equally obsessed with hundreds of billions more the federal government spends on highways is something for their therapists.
— Samantha Shankman
Share
Tweet
Share
Post
Send

The platform Republicans adopted at their convention included a call for full privatization and an end to subsidies for the nation’s passenger rail operator, which gobbled up almost $1.5 billion in federal funds last year.

“It is long past time for the federal government to get out of the way and allow private ventures to provide passenger service,” the platform said, arguing that taxpayers dole out almost $50 for every Amtrak ticket. 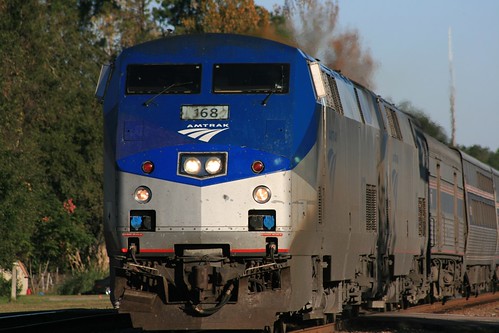 Amtrak operated at a net loss of over $450 million last year. Photo by Gene Bowker.

Long a political cudgel in the halls of Congress, Amtrak is among a number of transportation functions Republicans say should be turned over to the private sector — including airport security, also on the chopping block in the GOP platform. At its core, the debate juxtaposes differing visions about what role government should play in ensuring public access to services — even if they’re losing money hand over fist.

For President Barack Obama, Amtrak symbolizes a communal investment in the American infrastructure that enables and catalyzes economic growth. For Romney, who built a career mending the balance sheets of unprofitable companies, dropping Amtrak fits neatly into his message of doing away with spending that government can’t afford.

On Monday, Amtrak announced it had set monthly ridership records in each of the past 11 months, with expectations of a 12th in September.

Even with a record 30 million passengers boarding its trains last year, Amtrak operated at a net loss of more than $450 million. The government pitched in $562 million to keep Amtrak in the black. And that’s just on the operations side, where Amtrak says it covers about 85 percent of its own costs through ticket fares and fees. When it comes to capital costs, like keeping train tracks up, the government foots almost the entire bill, costing taxpayers about $650 million in 2011.

Leading the Republican charge that the U.S. can’t bear the continued hemorrhaging is Rep. John Mica, R-Fla., who chairs the House Transportation Committee. Mica says he’ll hold a hearing a month on Amtrak. A session Tuesday is to focus on Amtrak’s “monopoly mentality” on commuter rail.

While recognizing the need for a central entity to coordinate routes nationwide, Mica said the government has no place handling Amtrak’s day-to-day operations. But he acknowledged that some less profitable routes can’t get by without some subsidies.

“I’m for the privatization, and if we can end them, we can,” Mica told The Associated Press.

Despite chiding from tea party activists and libertarians, Amtrak enjoys broad support from most Democrats, making it unlikely its federal subsidies will disappear any time soon. And if Obama wins re-election, Amtrak will continue to have a powerful advocate in the White House.

“I’m the biggest railroad guy you’ve ever known,” Vice President Joe Biden, whose hometown Amtrak station was renamed after him last year, told supporters last week. “I have traveled round trip from Wilmington, Del., to Washington, D.C. — a 250-mile round trip — over 7,900 times.”

Democrats didn’t mention Amtrak in their platform, but spoke generally about rail’s importance and the need for increased investments in U.S. infrastructure. With more people than ever riding trains, government should be expanding intercity travel, not dismantling it, said Rep. Nick Rahall, D-W.Va., the top Democrat on Mica’s committee.

“This short-sighted proposal that Republicans are again trotting out would mark the end of the line for Amtrak service across the country, while punching a ticket to the unemployment line for thousands of workers,” Rahall said.

Proponents of continued subsidies say opponents are missing the point: It’s in the public interest to keep tens of millions of cars off already congested highways and from polluting the environment.

Inevitably, comparisons to Europe and Asia emerge, with skeptics questioning why for-profit rail travel can succeed overseas. But while other nations have privatized some routes, few operate systems that are free of subsidies. Japan and England repeatedly have had to bail out train systems in dire straits.

More to the point, the sprawling U.S. is not Europe, with its dense peppering of major cities. Transportation experts describe a sweet spot of about 200 to 300 miles between cities where train travel can be profitable and competitive. Any farther, and it becomes quicker and cheaper to hop a flight.

Situated perfectly in that sweet spot is the Northeast Corridor, the lifeblood of Amtrak’s system. The route connects Boston to New York to Washington — each leg less than 250 miles. Both parties say if there’s any hope for Amtrak’s future, it’s along that bustling corridor.

Cutting subsidies would almost surely mean jettisoning the long-distance routes that connect far-flung parts of the country, and few members of Congress want to see their districts lose connectivity to the transportation grid.

In a surprise move, the GOP-controlled House in June boosted Amtrak’s overall funding by $384 million, offsetting reductions in operating subsidies with new money to repair bridges and tunnels. In its funding request for next year, Amtrak asked Congress for less money for operating costs than it received this year, citing an improving financial situation.

A recent report to Congress from Amtrak’s inspector general said the company was making progress on many fronts. One suggestion investigators said Amtrak had failed to take up: adding more special trains to help reduce its reliance on federal subsidies.