How visitors can tour and play in past Olympic stadiums

Proud cities keep their Olympic stadiums in top shape decades after the games end allowing visitors to swim, skate, or run the same grounds as gold medalists and offering tours with historic insights surrounding the events.

In Sydney, you can swim in the same pool where Ian Thorpe won five Olympic medals in 2000. In Berlin, you can pose for photos in the stadium where Jesse Owens won four gold medals in 1936. In Lake Placid, N.Y., you can skate on the same rink where Eric Heiden speed skated his way to five golds in 1980.

You don’t have to go to London to enjoy the Olympics.

Many venues used for past Olympic Games are still standing, some in modified form. A few are open for public sporting use, while many others offer tours for a fee. Many Olympic cities also have sports museums with heavy doses of Olympic memorabilia. 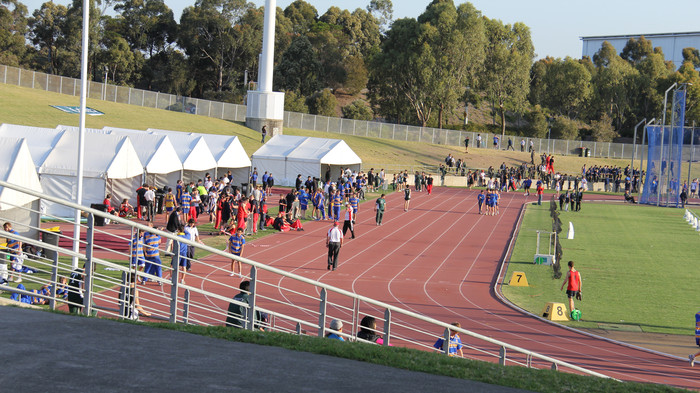 This Sept. 15, 2011 photo shows a track used for warm-up during the 2000 Olympics is shown at the Athletic Centre in Sydney. Photo by AP Photo/Anick Jesdanun.

If you’re taking a trip to a city with an Olympic past, you might want to fit in a visit to the Olympic stadium or museum. It’s a way to relive those gold-medal moments and learn about city life before, during and after the games. For some of the smaller cities, the Olympics represented their one shot at claiming the world’s spotlight.

Here are some places to consider:

The bulk of the Sydney Games in 2000 took place at Sydney Olympic Park, a short train ride from the city’s center.

The opening and closing ceremonies were held in what is now ANZ Stadium. As part of the tour, you can pose for photos standing on a medal stand — take your pick of gold, silver or bronze. An extended, pricier Gantry Tour takes you high above the field along steel mesh walkways used by crews to access lighting and sound equipment.

Track and field events also took place there, though the actual track used was rolled up like a carpet and moved to the warm-up area of the nearby Athletic Centre. (The main track at the Athletic Centre had been used for warm-up during the Olympics.) The Athletic Centre is open for recreational use when there isn’t an event scheduled, with either the main or warm-up track open on a given day.

The Aquatic Centre has an Olympic-size pool, naturally, open to the public for lap swimming. Diving competition also took place there (you can walk by, but can’t use the diving pool, though). Families may be more interested in the indoor water playground next to the Olympic warm-up pool.

After your swim, you can play tennis or try out archery at other venues around the Olympic Park.

For more details about hours and fees, visit these sites:

Melbourne hosted the Olympics in 1956, but much of the main venue has been transformed since then. The tour of the Melbourne Cricket Ground offers more about cricket than the Olympic Games that took place there. However, a sports museum has an extensive section on the Olympics. That’s where you can see the cauldron where the Olympic flame burned during the Melbourne Games.

The Cricket Ground also hosted some preliminary soccer games when the Olympics were held in Sydney.

Located about five hours north of New York City, Lake Placid hosted the Winter Olympics in 1932 and 1980. Several of the venues are still open for tours and recreational use, though some are operational only during the winter season.

Die-hard fans may want to ride the bobsled. It’s the actual one used in competition, though you only get to ride part of it, with a professional escort. If you are brave, you can also ride the head-first skeleton run, though it wasn’t an Olympic event during either of the Lake Placid Games.

While there, you can tour the Olympic Center, where the U.S. ice hockey team defeated the Soviets in what has become known as the Miracle on Ice. You can skate in one of its indoor rinks. The outdoor speed skating oval is open during the winter months and is the same one used by Heiden and other Olympic athletes in 1980.

A separate tour is available for the Olympic ski-jumping complex, and Whiteface Mountain is open for skiing during the winter. Lake Placid also hosts an Olympic museum downtown.

Consider an Olympic Sites Passport for discounts if you are visiting several venues. To plan your trip, visit http://www.whiteface.com .

Germany hosted two notorious games: The 1936 Berlin Olympics, which Adolf Hitler tried to turn into a showcase of Aryan supremacy, and the 1972 Munich Olympics, married by a hostage crisis that left 11 Israelis dead.

You see the majestic Olympic Gate — two towers holding up the Olympic rings — as you approach Olympiastadion Berlin. Next to the stadium is the tower and parade grounds used by the Nazis for military and political ceremonies.

A tour takes you to the stands overlooking the track area where Owens and other athletes competed. You can see the unlit cauldron at one end of the stadium. You can also see the balcony from which Hitler had watched the games, though it had been shortened after World War II as part of de-Nazification efforts.

Sign up for the Berlin Marathon in September, and you may also get to run on the track the morning before the race. It’s not the original track surface, though.

Many of Munich’s events took place at Olympiapark. The main stadium was used for the opening and closing ceremonies, track and field and soccer. With a tour, you get to walk on the track.

The tour also takes you to a VIP lounge filled with Olympic artifacts such as torches from past games and shoes worn by some of the athletes, including Kenya’s Kipchoge Keino, who won gold in the 3,000-meter steeplechase in 1972. A wall display of key moments includes a newspaper headline on the massacre.

The athletes’ village where the terrorism acts took place is still around, used mostly for offices and housing these days. Visits are discouraged. Instead, check out a memorial at the Olympic park.

For details about tours and fees, see:

Beijing, China and other destinations

The National Stadium was the site of the opening and closing ceremonies, track and field events and soccer and is notable for its architecture — steel “twigs” on the outside form a massive, curving nest. See http://www.n-s.cn/en .

The National Aquatics Center, where Michael Phelps won eight golds in 2008, is dubbed the Water Cube for its blue, bubble-like exterior. It’s a water park these days. Details are at http://www.water-cube.com , though you might need an online translating service to read the Chinese-language site.

Barcelona, Spain, which hosted the 1992 Summer Olympics, offers free entrance to the stadium, but a museum next door charges an admission fee. The museum has a brief discussion on the Ancient Olympics in Greece, but focuses on modern times and has an extensive collection from the Barcelona Games.

If museums and stadiums aren’t your style, you can visit the shops and cafes at Port Olimpic, a waterfront section of Barcelona revived for the games. Yachting events took place off that harbor.

If you’re adventurous, head to the Arctic island of Spitsbergen. Part of the Olympic athletes’ village from the 1994 Winter Olympics in Lillehammer, Norway, was moved there after the games and is now a Radisson hotel.

You can also sign up for the Athens Classic Marathon in November and run roughly the same route of the 1896 and 2004 Olympics in Athens. The route somewhat traces the journey that Pheidippides, according to legend, ran in 490 B.C. to deliver news of a battle victory.

If there’s another Olympic city you’re visiting, Wikipedia is a good start for figuring out where the events took place. You should then visit the website of the venue for confirmation and tour information. A nonprofit group that grew out of the 1984 Summer Olympics in Los Angeles also posts official reports from every Olympics at http://bit.ly/c9wvgP . Many of the reports contain venue information.

Wherever you end up visiting, be sure to check ahead of time for special events. You may have to adjust your itinerary if the stadium you want to tour, run or swim in is holding a concert or sporting event that day.