UK border staff votes to strike the day before the Olympics

David Cameron has condemned a planned strike by border staff that is threatening to disrupt travel arrangements for the Olympics.

The prime minister said he hoped the strike would not go ahead but insisted the Olympics would be safe and secure regardless. 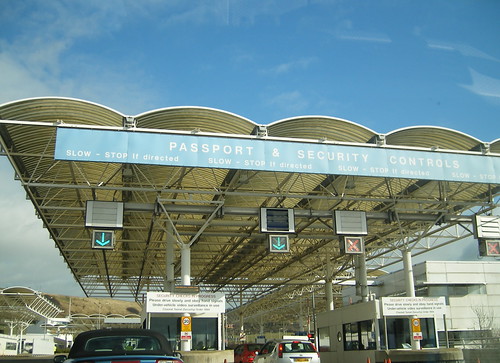 Border officials voted on Wednesday for industrial action, raising the spectre of strikes affecting passport queues at Heathrow during the busiest days of the Olympics.

Members of the Public and Commercial Services (PCS) union agreed in principle to strike and other action, which could include an ongoing work-to-rule, in protest against their pay and working conditions being eroded and the privatisation of civil service jobs, and to highlight what they describe as a “public service falling apart at the seams”.

Cameron said: “In terms of the ballot that took place yesterday, my understanding was there was around a 20% turnout. It was a very narrow majority so I hope strike action won’t take place.”

The Border Force is already stretched, with supplementary staff enlisted to ensure there is no repeat of the reported three or four-hour waits that made embarrassing headlines internationally earlier this year.

Emergency staff the Home Office drafted in took the place of striking officials during action in May and last November. But while those strikes did not lead to significant extra queues, the PCS claims that untrained replacements waved through many passport holders to avoid lines building up. And Theresa May, already under fire for the G4S Olympic security fiasco, where police and soldiers have had to step in for absent guards, will not wish to face further questions over security.

The mandate for action comes after the PCS balloted almost 16,000 members representing the majority of Home Office employees in the Identity and Passport Service, the Criminal Records Bureau and the Border Agency. Around 5,500 PCS members are employed directly in the border operations, and others in the Home Office are supplementing the normal staff during the Games.

The union will decide what action to take and must give seven days’ notice of a strike, which could mean pulling immigration officials off duty the day before the Olympic opening ceremony – a date forecast by Heathrow as the peak day for sponsors and international media to arrive.

The PCS general secretary, Mark Serwotka, said any disruption was justified, claiming government cuts were leaving Home Office services – particularly customs lanes at the borders – massively understaffed. “This is not about the Olympics,” he said. “What the government is doing by papering over the cracks is much more irresponsible. If it takes this action to highlight the reckless way they are carrying on, that’s what we’ll do. Public service delivery in the Home Office is falling apart at the seams under the cuts agenda.”

Last week the chief inspector of borders and immigration, John Vine, warned that temporary staff were processing passengers more slowly while asking fewer questions, and had received only basic training.

The immigration minister, Damian Green, said: “I call on the union to call off this irresponsible proposed strike. The security of the UK border is of the utmost importance and we will use our trained pool of contingency staff to ensure we minimise any disruption caused by planned union action. Any action that disrupts the Olympics will be completely unacceptable and the public will not support it.”

Meanwhile, a further bus strike during the Olympics was averted after workers voted to accept a bonus payment of up to £577 for full-time employees. Peter Kavanagh, Unite’s regional secretary, said: “Bus workers finally have a fair deal which recognises their contribution to keeping London moving over the Olympics. They would have been offered nothing by their employers and TfL would have done nothing unless bus workers took action to force them round the negotiating table.”