Skift Take
Travelzoo — like almost everyone else — is facing competitive pressures in the deals arena so it is looking for new revenue streams from hotels, and is seeking to manufacture some momentum through increased marketing spend.
— Dennis Schaal
Share
Tweet
Share
Post
Send

Travelzoo, which grew up on the advertising model through its newsletters, is looking to expand its use of the commission model with hotels.

In conjunction with its second quarter earnings announcement today, Travelzoo revealed that it intends to “extend direct hotel commission trials in Europe and North America and further capitalize upon our hotel market opportunity.”

Chris Loughlin, Travelzoo CEO, told Skift the company ran a pilot of the commission model with Yotel in New York City, for example, and drove “a half a million dollars in business” for the hotel. 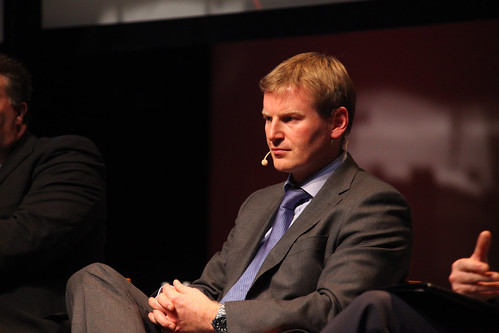 Travelzoo CEO Chris Loughlin at a conference in 2009. Photo by Buy Tourism Online.

The advantage of the commission model, which Travelzoo began using a year ago in voucher deals for its hotel and dining Getaways offers, is that Travelzoo can distribute the offer to subscribers around the world, Loughlin says.

In contrast, advertised offers generally are relegated to certain geographies and number of rooms, he adds.

In addition, some hotel brands don’t want to associate themselves with vouchers, and these hotel commission trials in the U.S. and Europe don’t require vouchers for redemption, Loughlin says.

Stock pop, but cautions on growth

However, there were some cautions as officials acknowledged that revenue growth is slowing.

During an earnings call with analysts, Loughlin attributed the slowing top-line growth to the company’s rapid expansion, increased competition, the economic situation in Europe, and reduced spending by airlines and online travel agencies.

Some of the OTAs trimmed their spending in Travelzoo during the second quarter because they are focused on profits instead of revenue growth, Loughlin said, adding that some OTAs in Europe went out of business.

And, about the competitive environment, CFO Glen Ceremony said: “It’s a highly competitive market. There are lots of options out there.”

Part of Travelzoo’s strategic plan is to “reacclerate subscriber growth” to its newsletters by investing an additional $3 to $4 million per quarter in audience growth over the next 18 months.

The target markets for this increased investment are Travelzoo’s largest markets, namely the U.S., Canada, the UK, and Germany.

And, the company estimates this would lead to a $0.15 to $0.20 reduction in earnings per share each quarter over the next year and a half.

Interestingly, Travelzoo believes it can make that marketing spending more efficient than in the past because subscribers now use their credit cards to buy Local Deals and Getaways from Travelzoo.

And, this means, Loughlin said, that Travelzoo’s analytics now feature up to 36 data points per subscriber.