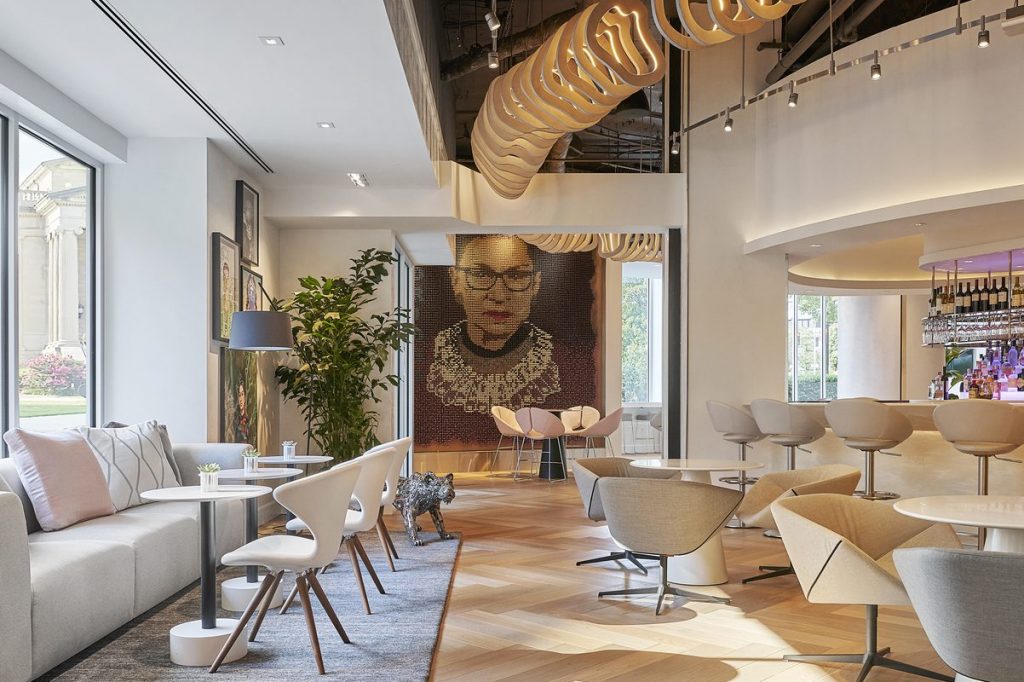 Hotels are blurring the traditional division between business and politics, and it comes at just the right time for one of travel’s most engaged and influential demographics.

Women are an immensely powerful bloc in the travel industry, accounting for 56 percent of leisure travelers worldwide. The group’s financial clout is expected to grow, with women under the age of 30 earning the same amount as or more than their male counterparts in 22 U.S. metropolitan areas.

But with more states restricting abortion rights following the U.S. Supreme Court overturning Roe vs. Wade in June, female travelers are increasingly reconsidering how they spend their travel dollars, including taking a hard look at hotels. That mindset is driving hotels nationwide to provide a more welcoming atmosphere for female guests.

Although dozens of hotels offer offering simple amenities like complimentary tampons or niche beauty products, Boston-based solo traveler Christine Casalini said the most important factor for her in choosing accommodation is a welcoming culture. She said she’s more mindful about where she spends her time and money in recent years after reading reports that women staying at large hotel brands were suspected by staff as being sex workers while dining or drinking alone.

“I choose to support smaller boutique or historic hotels that break the cookie cutter mold of corporate hotels,” said Casalini, who added she’s avoiding travel to destinations where she considers women’s and LGBTQ rights under peril.

That’s good news for the Hotel Zena in Washington, D.C., a property that took its name from a mythological princess.

“Everything from the name to the hotel’s 60 original artworks were specifically selected to celebrate female empowerment and inspire and ignite conversation,” said Sherry Abedi, the area general manager of Viceroy Hotels and Resorts, which operates Zena.

Zena has indeed ignited conversation, especially the portrait of late U.S. Supreme Court Justice Ruth Bader Ginsburg in the lobby that was crafted from 20,000 handpainted feminine hygiene products. Given its location in Washington, D.C., a curving wall with 8,000 protest buttons representing major events in women’s history is also particularly meaningful.

“We don’t shy away from showing our support to underrepresented groups,” said Abedi, adding that the hotel also sponsors programming tied to current events. Zena held an event to commemorate Women’s Equality Day on August 26 in which members of the public were invited to interact with female leaders in industries including music, art, and food and beverage.

Meanwhile, 21C Museum Hotels — a boutique group with properties in Kentucky, Tennessee, Arkansas and Oklahoma, states where abortion is mostly illegal now — maintains there’s no restriction on freedom of speech or thought. An exhibit titled The Future is Female exhibit debuted at its Louisville property in November 2016 to coincide with that year’s presidential election, and has since expanded in scope artistically and geographically.

“There are now artists included in the exhibition who identify as male, non-binary, and trans. There is a deeper exploration of gender fluidity than in earlier iterations,” said museum director and chief curator Alice Gray Stites, adding that the exhibit has grown from two dozen works to nearly 100 pieces.

As for whether the works could turn off potential guests, Gray Stites believes art makes its own statement to each person viewing it.

“My hope is that the breadth of ideas addressed in the exhibition reflects a broad interrogation, rather than make a declarative statement. We anticipate that not every visitor will like every artwork or exhibition, but we don’t assume or predict what people will feel or think,” she said. “And we do change the exhibitions, offering new experiences to our guests and the public.”

While Casalini applauds efforts such as 21C’s exhibits, she believes hotel events are too focused on capitalizing on celebrations like Pride Month or Women’s History Month — such as the Virgin Hotel in Nashville hosting brunches during the latter occasion this year to honor iconic musicians like Rihanna and Lady Gaga. Casalini said she’d like to see a greater emphasis on cultural or educational programming instead of partying.

The Ace Hotel is one chain taking steps to emphasize educational programming. Its Los Angeles property hosted a film festival last month showcasing works with female directors, with proceeds benefiting SIECUS, an organization that advances sex education. But perhaps few hotels are as transparent about where they stand when it comes to heated reproductive issues as the Yale Hotel in Yale, Michigan. Even before Roe vs. Wade was overturned, general manager Shelley O’Brien offered free stays to women seeking an abortion in her state.

While medical tourism has long driven travelers to dozen of destinations worldwide, it’s possible that hotels such as the Yale will attract female guests traveling for reproductive care.

UPDATE: This article has been updated to remove a quote from a representative from Ace Hotel.