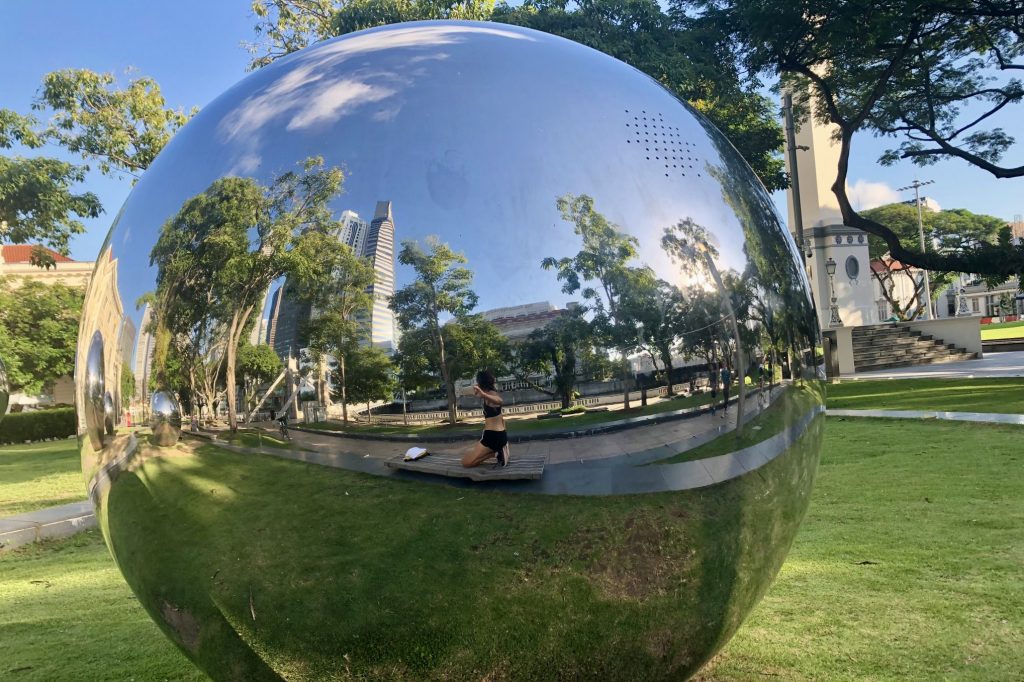 Singapore won’t settle for being just a garden city anymore. It wants to be a green city. Sustainability will be a prime reason for tourists to visit and for investors to come in and seed new green solutions for travel and tourism, say officials there.

“Tourists today are more environmentally-conscious and are looking for sustainable travel options. Our vision is to position Singapore as a top sustainable and innovative urban destination,” said Singapore’s trade and industry minister Chan Chun Sing, last week at an annual tourism industry conference.

The vision is part of a national Green Plan 2030, launched in February and spearheaded by five government ministries: education, national development, sustainability and the environment, trade and industry, and transport.

All over the world, tourism cities want to be cleaner and greener, with the pandemic flaming that desire. But there’s no simple solution, even in Singapore, as no tourism industry on its own can build a sustainable environment for visitors.

“Most destinations are not managed sustainably, primarily because they didn’t even consider it until recent years. Most municipalities spent only on promotion and left development to the private sector. This is how we got into trouble,” said Randy Durband, CEO of Global Sustainable Tourism Council. The independent organization sets global standards for sustainable travel and tourism, and helps destinations and businesses achieve those standards.

From Garden City to Green City

A new study by WWF-Singapore and Accenture highlighted the need for a collective, integrated action across people, public and private sectors to create a sustainable future for all.

Singapore tourism is among those lucky few where a green government is leading the whole country in the long march towards becoming carbon neutral by the second half of the century.

In truth, even if the industry does not lift a finger, it will benefit from the Green Plan 2030.

For one, tourists can expect a lot more nature in Singapore, just as Covid-19 has reset people’s respect for Mother Nature and healthier environments.

More than one million trees will be planted across the city-state between 2020 and 2030, while land area for nature parks will double, with parks providing more recreation options such as hiking and birdwatching. Additional sky-rise greenery, nature ways along roads and other measures will create a “city in nature.” In all, there will be 1,000 hectares more of green spaces, and recovery plans for 130 animal and plant species.

Visitors in Singapore will commute via an expanded rail network, in public buses and cars that use only cleaner-energy, or simply by walking and cycling. Cycling paths will triple to 1,320 kilometers by 2030, from 460 kilometers in 2020.

Tourists will discover a sustainable living world, where citizens and businesses heed the national strategy to cut electronic-waste, packaging waste and food waste. Waste sent to the landfills per capita per day will be reduced by 30 percent by 2030.

This is a far cry from today, where citizens overall aren’t green yet. Their “take, make, use and throw” approach shows up by the amount of disposables sent to the incinerator. In 2019, that’s 200,000 tonnes, enough to fill 400 Olympic-size swimming pools.

Singapore Tourism Board CEO Keith Tan declined to pick a city which Singapore can benchmark against as a top sustainable urban destination. “We intend to build on and incorporate sustainability into our City in Nature identity, to differentiate ourselves from other global urban destinations,” he said.

While there isn’t a consistent green ranking for tourism cities, a quick check shows Copenhagen, Denmark, as the current top choice. Singapore actually isn’t far behind. Lonely Planet, for instance, ranks Singapore third after Portland, Oregon, and Copenhagen in a January article.

“Globally, it’s a selection of the Nordic cities,” said Durban when asked to name his top green tourism city. “One could choose Gothenburg, Sweden, but I prefer to go with Copenhagen based on the challenges of scale in the larger city. They aim for carbon neutrality as a city by 2025, have been working on it for years, and remain confident that they can get close to if not 100 percent there.”

“Singapore tends to win top honors in Asia, such as the Arcadis [Sustainable Cities Index 2018],” he added. (Note to readers: Arcadis has not released a more recent index.)

But what makes a green tourism city?

WWF-Asia said it’s the maxim of “not taking anything away and not leaving anything behind.”

Urban tourism has distinct differences from other forms of tourism but the same maxim applies just as well to suppliers and consumers of urban tourism, said Raghunathan.

This need not apply to just more developed urban centers, but less developed ones.  “An appreciation of their social and cultural offerings, be it art, music, dance, food without conspicuous over-consumption helps in every way towards reducing the tourism footprint in these urban tourism areas,” said Raghunathan.

Over the coming months, the Singapore Tourism Board will reach out to tourism players for feedback and ideas that will help form a roadmap towards being a top green urban destination.

“We must tackle sustainability collectively as a destination, rather than enterprise by enterprise,” said Tan, while commending efforts that have already been taken by some industry players.

Sentosa Island, for instance, is aiming to be carbon neutral by 2030. Homegrown hotel company Far East Hospitality is rebranding more of its hotels to address a new profile of customers. They are now more discerning and mindful about the environment and sustainability issues, said CEO Arthur Kiong.

Singapore is not just eyeing these changed travelers, but the businesses that cater to them. It wants to attract companies worldwide to launch first-to-market sustainable tourism solutions and innovations in the country.

As a first step, the tourism board is expanding the scope of its Accelerator program to include such start-ups.

“We welcome companies with an ambition to expand to this region and want to be part of Southeast Asia’s growth story to apply,” said Tan. “We are open to innovative solutions that can track, monitor and achieve the sustainability goals of tourism businesses.”

Selected companies receive funding support of up to 70 percent of qualifying costs, or up to S$25,000 ($18,703) per company to testbed their solutions.

“Singapore absolutely can and should be a place to launch them,” said Durban. “Cities are the best launch points, and a city-state is all the better, especially with a developed economy, a highly educated society and great infrastructure.”

But there is cynicism among some industry members.

“A word that has been bandied about,” said one, of sustainability.

“An investment we can ill-afford right now.”

Be that as it may, Far East Hospitality’s Kiong, who is also vice president of the Singapore Hotels Association, insists that Singapore must use this pandemic to reinvent itself.

“We are into our third tourism evolution. The first, in the early 1970s to late 1980s was a ‘me too’ with food and shopping. The 1990s to 2010s was ‘me better’ i.e., newer convention facilities and bigger integrated resorts. In the next evolution, we have to be ‘me only’ – unique destination and experiences.

“Singapore saw a tad below 19 million arrivals in 2019 and this generated about S$28 billion ($21 billion) in tourism receipts. In a post-Covid world, we cannot continue to grow arrivals but must at least maintain the number and grow tourism receipts. Hence we need a meaningful pivot,” said Kiong.

The risk of not doing so is evident. For one, Singapore isn’t alone in the race to win over new travelers. The Global Sustainable Tourism Council said it is seeing “a great pick up” by governments and businesses alike to apply its Destination and Industry sustainable criteria respectively.

“We’ve been busier than ever during the pandemic, as many governments are using the pause to plan and develop, and we’ve been advising on systematic approaches in many countries and countless destinations. But the largest countries where we’ve gone the deepest in the past 15 months are Japan, Switzerland and Greece. Many hotel operators and tour operators at larger scale have also been deeply engaged,” said Durban.

For decades, the Garden City, a vision of Singapore’s founding father, Lee Kuan Yew, has been Singapore tourism’s bed of roses. After all, who can compete with such a unique selling point as: “All cities have gardens, but none are a city in the garden like Singapore.”

Perhaps it’s time for a new differentiator, and what can be more natural and timely than a leap to be green in the deepest sense of the word.