Tourism in U.S. Chinatowns Hit Hard by Racism and Pandemic Since the outbreak of the pandemic, the number of hate crimes committed against Asian Americans has increased exponentially. Covid-19 and racism have combined to cripple tourism and local businesses in Chinatowns across the United States.

Jacqueline Church remembers the day vividly. “I was in a coffee shop on my street,” she said. “And a truck with a big Confederate flag and a Trump flag hanging out the back of the truck, and there was a woman of Indian descent standing next to me in line and both of us were just holding our breath, waiting for something.

“We didn’t know what. Luckily they just kept going, and no else said anything. But there was definitely a feeling of a lack of safety under the prior regime,” added Church, who is of Japanese descent and married to a native of Hong Kong.

Although the incident happened a few years ago “when the racism was much more on the surface,” said the guide who organizes tours of Boston’s Chinatown, “I don’t think it’s disappeared.”

It certainly hasn’t. Since the outbreak of Covid-19, Asian Americans have been the target of virulent racism, much of it coming from the former inhabitant of the White House. That racism has significantly contributed to the tidal wave of attacks on members of the Asian American community. Nearly 3,800 incidents of hate were committed against Asian Americans and Pacific Islanders in the U.S. between March 19, 2020 and February 28, 2021, according to a report compiled by the nonprofit group Stop AAPI Hate. That, of course, does not include the killing of six women of Asian descent in the Atlanta area on March 16.

It’s not just the racist attacks that have made the last 12 months painful for many Asian Americans. Numerous Chinatowns—neighborhoods that represent an immense amount of pride in many U.S. cities from Honolulu to Los Angeles to Philadelphia—have struggled mightily due to the pandemic. A large number of businesses located in these neighborhoods are fighting for their survival, and their hardships have been compounded by a severe downturn in tourism.

“The Chinatown community depends on restaurants and with tourism all but gone, it’s had a ripple effect on all businesses,” noted Emma Yu, the executive director of Chicago’s Chinatown Chamber of Commerce. “Chinatown has always been a tourism designation, but tourism is down by more than 50 percent (from February 2020) and that’s a lot of foot traffic no longer coming to the area spending money.” Chicago is far from alone in being battered from a significant decrease in visitors to its Chinatown. San Francisco is another locale whose Chinatown has been hit hard by the drop in tourism. “San Francisco lived and died on tourism revenue,” said Marc Pomerleau, a tour guide for Chinatown Magic. “Well, when Covid hit, there were no tourists. So it’s estimated that 50 percent of Chinatown businesses may not survive this Covid period.”

Many of those visitors to Chinatowns were guests of tour companies that have shut down. “It was not unusual in the olden days to host twenty to sixty guests every night,” said Cynthia Yee, who has run the San Francisco Chinatown Ghost Tours for nearly 30 years.

“[But] by the end of 2019, when Covid was beginning to surface, [the number] dropped to ten per week and then, the business had to be in lockdown,” Yee added.

On the opposite coast in Boston, Church can attest to how the pandemic has ravaged her Chinatown. 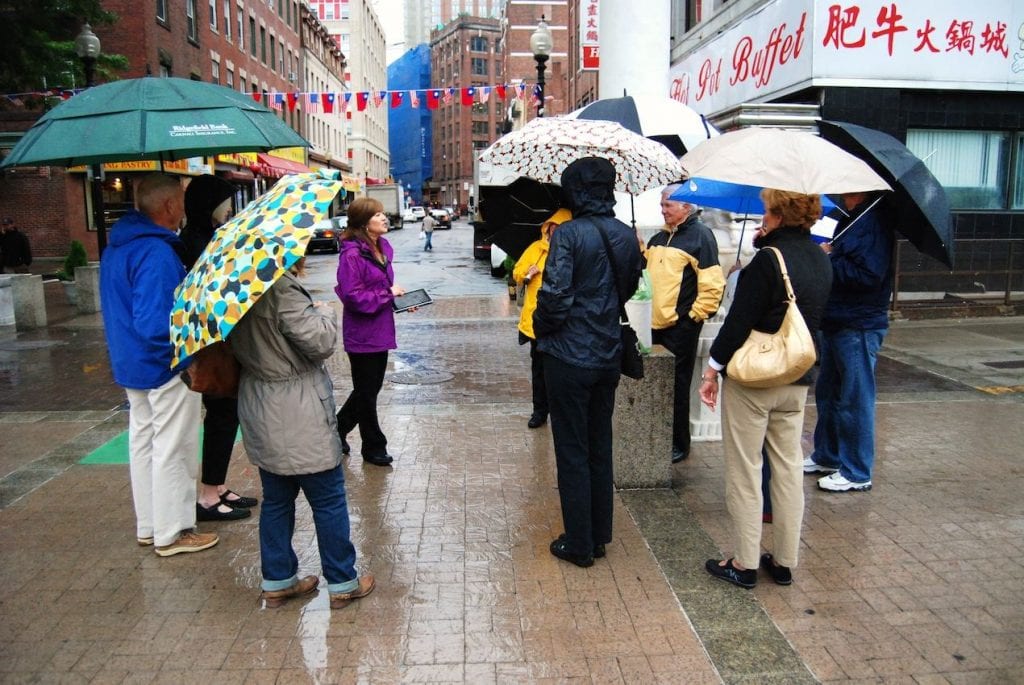 Jacqueline Church (in the purple jacket) leading a tour in Boston’s Chinatown before the pandemic. Source: Boston Chinatown Tours.

“We don’t have the foot traffic from tourism because no one is coming to Boston,” Church rued. Because of Covid-19, she’s unable to take school groups to Chinatown. “Local schools would take a whole class studying China or studying different cultures, and I would do back-to-back school tours. That’s all gone because the schools are closed,” she explained.

So in the midst of dealing with the double whammy of the pandemic-caused downturn
and racist violence, what is the mood like in Chinatown in San Francisco, where, according to Yee, people of Chinese descent have lived since 1848? When asked that question, Pomerleau—a student of Chinese language and Chinese history—expounded on the past. “What’s going with the violence against Asians that we’re experiencing now is obviously nothing new,” he said. “When you go back in time from the very beginning of when the Chinese came, the level of racism and the actual legal policies that were enacted to minimize, suppress and oppress the Chinese and Asians generally were huge.”

“People don’t realize one of the biggest lynchings in the U.S. history was not perpetuated against black people. It was actually against Chinese people in Los Angeles. Over 250 were murdered in one night. The Chinese were lynched from the very beginning—when they came to work in the gold fields. They were chased off by the ‘real Americans,’” he added.

Hateful Legacy of the Bubonic Plague

“So this legacy kinda continues to this day,” Pomerleau ruefully acknowledged. “One of the connections that people are always surprised by on the tour is in [the early 20th century], the bubonic plague broke out in San Francisco and in fact, Chinatown in San Francisco was the epicenter of that outbreak because people lived in very close quarters.”

He continued, “The Chinese were blamed for the bubonic plague and Chinatown was ostensibly fenced off from the rest of San Francisco. You could not enter or exit. There were articles and cries to get rid of the Chinese. To send them back and burn Chinatown to the ground because they were viewed as being responsible for bringing the bubonic plague, which was absolutely not true.”

However, Pomerleau can take solace in the fact he and his colleague Cynthia Yee have not received any racist messages at their tours. While they haven’t run tours since the outbreak of the pandemic, a video that Pomerleau recorded with the Awesome Theatre in San Francisco that resembled an hour-long version of his tours has received nothing but rave reviews. “It would be very hard to figure out how someone would be racist about the tour,” he stated. “Generally, there’s been a lot of support from the Black Panthers and other African American civic groups that are in very much support of stopping this violence against Asians and doing whatever they can to send that message that it’s something that has to stop.” As for the resumption of excursions in April, “The community is very much behind restarting the tours because it’s a great way to bring people into Chinatown,” Pomerleau said. “And they do tend to want to have lunch or have a beer afterwards. I’m very encouraging of having lunch, having dinner, spending some time in Chinatown and helping support the businesses.”

Meanwhile, in Boston, Church revealed that a couple of shop owners in Boston’s North End have taken to calling the pandemic on social media “the Wuhan virus” or “China virus.” “And people I know have been bumped or jostled off the sidewalk by someone muttering ‘China virus,’” she added.

She shared other concerns about racism, mainly how will her tours fare when they resume. “There’s one other person who runs Chinatown tours and she’s white. And I wonder if people will prefer to take her tours than mine,” Church opined.

When it’s easier to explore Chinatowns around the country, visitors will be treated to vibrant places—if Boston is any indication. “It’s an amazing, culturally rich neighborhood. Very resilient,” she said. “The things that I admire most about Chinatown are the things I am most hopeful we would find in the country as a whole.”

“For example, the spirit of adventure. You think of someone coming from a place like Guangdong or Guangzhou in the late 1800s not speaking English at all, desperate from some opportunity. Where did they come? They came here,” Church asserted. “They found work here. When no one spoke their language, they found a way to survive. Even when times were hostile, they found a way to deal with that.”

Resilience personified. And resilience that Chinatowns will surely display to attract tourism post-pandemic.

CORRECTION: An earlier version of this story incorrectly stated the name of Chinatown Magic.

Photo credit: Empty streets like this in San Francisco's Chinatown are not uncommon in Chinatowns all across the United States as racism and the pandemic take their toll. Jim Nix / Flickr