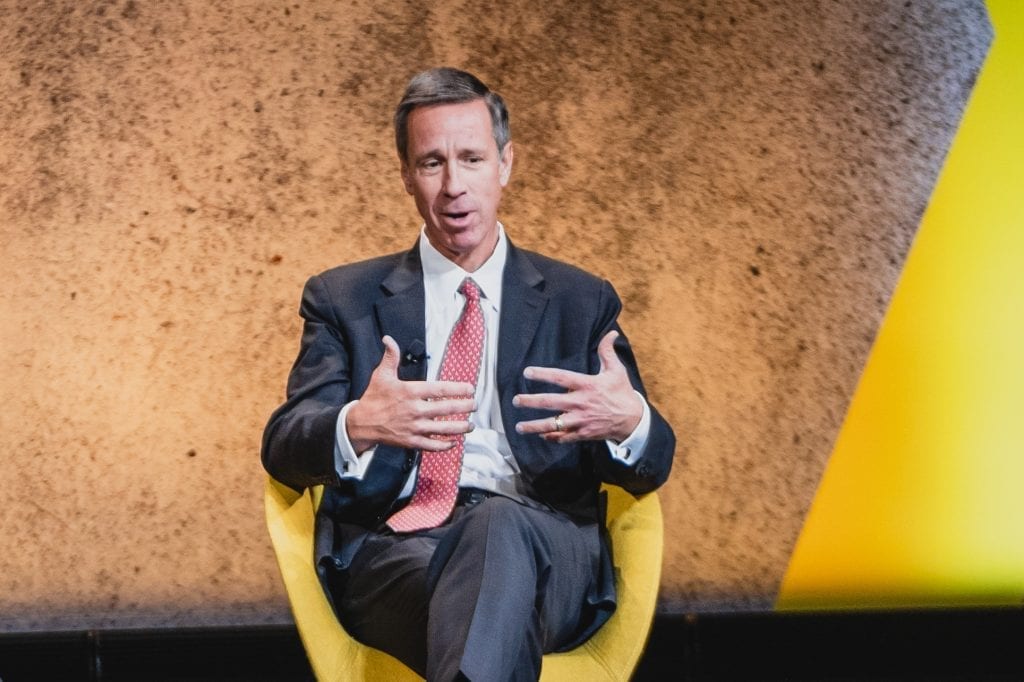 Sorenson's passing leaves a monumental void in the hotel industry that won't soon be filled.

Arne Sorenson, the CEO of Marriott for the past nine years and only the third chief executive in the company’s history, died on Monday. He was 62 and had been battling pancreatic cancer for nearly two years.

The company announced on February 2 that Sorenson would be reducing his work schedule to receive further treatments.

Marriott tapped Stephanie Linnartz, group president, consumer operations, technology and emerging businesses, and Tony Capuano, group president, global development, design and operations services, to fill in for Sorenson. The two will continue in that role until a successor is named within two weeks, the company said.

A Video Interview With Arne Sorenson from Skift Global Forum

A Winding Road to Hotels

Sorenson’s path to the head of the world’s largest hotel company wasn’t a typical one.

Born to a family of Lutheran preachers in Tokyo, it was expected he would follow the family footsteps into religion. When the family returned to the U.S., Sorenson studied business and religion at Iowa’s Luther College. He met his future wife, Ruth Christenson, while there and they went on to have four children.

But Sorenson eventually went to law school at the University of Minnesota. Arne Sorenson with J.W. Marriott, the company’s chairman of the board and executive chairman, in Times Square. (Credit: Marriott)

It was while working at Latham & Watkins, a law firm in Washington, D.C., that Sorenson gained ties to Marriott. He represented the hotel company during its spinoff of its Host real estate division and began a friendship with J.W. “Bill” Marriott, the company’s executive chairman and chairman of the board.

“We were fired by our investment bank, if I remember right, not long after announcing the transaction,” Sorenson said at a Nasdaq speech in 2019. “It was a gift to me to be able to start to learn immediately from Bill Marriott.”

Sorenson eventually went in-house and began his tenure with Marriott in 1996, serving first as house counsel and later a variety of roles including chief operating officer. He became the first non-Marriott family member to serve as CEO in 2012.

His legal background may have been a selling point in his ascent to the chief executive position.

“The big advantage is you get used to being attacked as a lawyer. I tried cases, hostile-takeover cases, basically,” Sorenson said in a 2017 interview with Hotelier. “In that context, there are brilliant lawyers on the other side whose aim is to make you look bad, show that you don’t understand your facts or you don’t understand the law. You do that year after year for a while, you develop a certain toughness.”

Among his achievements, Sorenson oversaw the 2016 $13 billion acquisition of Starwood Hotels & Resorts, bringing the company’s portfolio to more than 30 brands and clearly establishing Marriott as the world’s largest hotel company.

But there were also the tough times. The company faced one of the largest cybersecurity failures of all time following the Starwood merger, labor disputes, and the rising threat of industry disruptions like Airbnb and online travel agencies.

Sorenson continued to face those difficult matters — as well as his own cancer battle for the last two years — while continuing to build Marriott’s development pipeline. Even with the worst year for travel, Marriott managed to flip to profitability by the third quarter of last year.

A Love of Company and Travel

Sorenson on Tuesday was remembered for his love of hospitality and of his workers. “Arne loved every aspect of this business and relished time spent touring our hotels and meeting associates around the world. He had an uncanny ability to anticipate where the hospitality industry was headed and position Marriott for growth. But the roles he relished the most were as husband, father, brother and friend. On behalf of the Board and Marriott’s hundreds of thousands of associates around the world, we extend our heartfelt condolences to Arne’s wife and four children. We share your heartbreak, and we will miss Arne deeply.”

Additional tributes poured in Tuesday from some of Marriott’s biggest competitors.

“I am deeply saddened by the heartbreaking news of Arne Sorenson’s passing. He was an incredibly respected man, a leader in hospitality, and a devoted husband, father and friend. It’s been a true honor to work alongside him on behalf of our great industry for so many years, and I will miss him and the friendship we’ve built,” said Hilton CEO Chris Nassetta in a statement. “On behalf of everyone at Hilton, I want to extend my condolences to the Sorenson family, the thousands of Marriott associates around the world and the countless people whose lives he has positively impacted over the years.”

“Arne was a great partner, always a warm and gracious friend – and I will miss him dearly,” Hyatt CEO Mark Hoplamazian wrote in a LinkedIn post. “The entire Hyatt family sends their heartfelt sympathy to all of our fellow hoteliers at Marriott.”

IHG CEO Keith Barr also expressed his condolences to the Sorenson family and those at Marriott.

“When he spoke, people wanted to listen, and when he led, people followed,” Barr said in a statement. “That is the mark of a great leader and his legacy at Marriott speaks for itself, not just in how he consistently raised the bar to grow the company, but also in the way he championed progress on important social and environmental issues, and represented our industry with such grace in the best of times and in the most challenging of times.”

The leader of the hotel industry’s largest trade group also expressed his condolences.

“Arne’s battle against cancer embodied the qualities that made him such an exceptional human being – endless optimism, perseverance, and servant leadership. His touch on the hospitality industry will be felt for generations. His impact on the lives of all of us who knew him personally is profound,” said American Hotel & Lodging Association CEO Chip Rogers in an online post. “The world is a better place because of Arne Sorenson.”

Sorenson’s impact was heralded — and even consulted — across travel sectors beyond hotels.

“We frequently sought his wise counsel and collaborated to improve the travel experience,” U.S. Travel Association CEO Roger Dow said in a statement. “Arne always offered a vision that extended well beyond the lodging sector he so expertly represented.”

United Airlines CEO Scott Kirby, noting the longstanding relationship between his airline and Marriott, reflected on the “good advice, counsel, and many phone calls” with Sorenson — especially during the pandemic.

“Arne, the United Airlines family stands strong with the Marriott family through this incredibly difficult time,” Kirby wrote in a statement. “Your leadership, humility and grace will be missed, not just within our industry, but across the globe.”

Sorenson’s devotion to his own company was most notable during the beginning of the pandemic, when he appeared in an emotional video to address employees. Sorenson noted some of his team were worried about the optics surrounding his shaved head — a normal part of cancer treatment. But getting face time with employees mattered most to the late CEO.

Sorenson also maintained his love for travel during a year when a public health crisis severely hindered the ability to cross borders and see the world. It was an unwavering love of an industry upon which he left a lasting impression.

“I miss travel and I cannot wait until I am back on the road,” Sorenson wrote in an open letter last September. “While there are days when it seems far away, I’m absolutely certain that the time to travel again is coming soon. When it does, I hope our paths cross.”