Will soundbites like "Zoom parties every day, every night" and other headline-grabbing quotes influence perceptions of the value of business travel, or do we take them with a pinch of salt?

Bill Gates predicts the number of business trips will halve in the future, and with that statement becomes the latest big name to throw their viewpoint into the mix.

“My prediction would be that over 50 percent of business travel, and over 30 percent of days in the office, will go away,” the co-founder of Microsoft said during a New York Times event this week. “Now that it’s not the gold standard to say ‘yes, you flew all the way over to sit in front of me,’ and that you can do the virtual connection, it will be a very high threshold for actually doing that actual business trip.”

Gates also shared how he felt bad for African leaders who were always traveling to the U.S. and Europe to attend conferences, when they had more important work to do in their own countries. “They spend half their time on all these trips, yet now we can go in and do a 20-minute call … it has been pretty impressive,” he said, adding this year he had already taken part in five “pharma CEO roundtables” virtually so far this year. The event used to be held in New York.

‘Zoom Parties Every Day, Every Night’

His comments follow similar remarks by the CEO of the world’s largest technology-focused venture capital fund.

Masayoshi Son, CEO of SoftBank, said he now prefers talking big business deals on Zoom — over dinner and a glass of wine.

“I like Zoom calls better and better, because whenever I go on an overseas trip I usually suffer from jet lag and sometimes it’s a waste of time. But without a long-haul trip, I feel better. Every year, I suffer from some sickness, but I’m not feeling bad at all and I can spend my time more efficiently and effectively,” he said when asked if Zoom calls were enough to stimulate his gut instinct when picking companies to invest in, during the company’s 2021 second-quarter earnings call.

“And Zoom is actually good because you can see the faces and you can see the presentation. You feel like talking to them in-person, in front of you. Even when I eat dinner, drink wine, I would do Zoom calls. So it’s like Zoom parties every day, every night.”

Natarajan Chandrasekaran, chairman of Tata Sons, said last month he used to fly from India to the U.S. to pitch a $50,000 project. But recently, he told the New York Times, his  consultancy closed $2 billion worth of deals in “five or six Zoom calls.”

Now’s probably a good time to take stock of what’s already occurred. Another technology giant, Amazon, has calculated it has saved nearly $1 billion in corporate travel, internal travel, and travel expenses so far this year.

Brian Olsavsky, Amazon’s chief financial officer, revealed the eye-watering amount during the company’s third-quarter earnings call on Thursday. In 2019, it reportedly spent $500 million on flights in the U.S. alone. 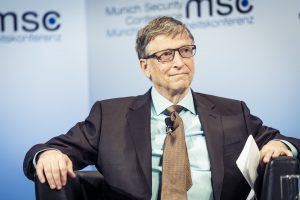 But among the quotable headlines, bear in mind some companies have something to sell (let’s not forget Microsoft Teams), or stand to gain in other ways (SoftBank’s Northstar division has reportedly invested $1.8bn in Zoom).

And on the flip side of the equation, we hear other CEOs saying Zoom will do the opposite, and lead to more business trips being taken. “I’ve been fond of saying the first time someone loses a sale to a competitor who showed up in person is the last time they try to make a sales call on Zoom,” said United CEO Scott Kirby.

Other business leaders also like to discuss the culture of corporate travel, CEOs including Paul Hudson of Sanofi. His perspective is that the pharmaceutical company will be calling time on the single meeting business trip.

Gates’ articulation on how companies conduct their business in the future won’t be the last we hear this year, but it’s certainly the most extreme to emerge since the pandemic began.