Reopening isn't just about giving tourists an entry pass, but having the ability to offer them the product they imagine it to be. In Thailand, both are a problem — unless the government acts.

Abandoned street life in Thailand’s popular destinations sends a searing shock on how the pandemic has uprooted one of the kingdom’s most unique attractions.

Once there wasn’t an inch left on the soi’s (local for side streets) to put yet another restaurant, bar or stall selling everything from beach hats and underwear to luggage and local art — a colorful snapshot of how much Thai people love to sell something. The footpath may be imperfect, the layout a mayhem, there could be a tattoo designer next to a seafood vendor — only in Thailand will you find this, and that’s why street life is a huge part of the country’s sense of place.

Today, the only sense you’ll get is that a catastrophe has happened and a whole community of small tourist providers have had to flee, or simply perish.

For local industry leaders such as Christophe Vielle, CEO of GCP Hospitality Thailand, a hotel investment and management company that owns among others a Pullman in Bangkok and in Pattaya, that’s “the biggest concern.”

“You talk about [a lack of] airlift? My biggest concern is that if business reopens in six months, how is it going to be in places like Phuket and Samui? They are dead! Go into the streets. Shops are not closed [temporarily]; the owners are gone, you see concrete,” he said during a session at the recent Hotel Investment Conference Asia-Pacific held online this year.

“It’s going to take a very long time before we can give people what they are looking for. Unless the country gives a level of money when it reopens to entrepreneurs for them to [restart], this is the biggest issue. I went to Samui. I was shocked. Forget it if tomorrow you have one million people coming in — the island is gone.”

While Thailand, Southeast Asia’s poster child of Covid-19 containment, continues to pore over various ideas to reopen safely, it may be overlooking the point that reopening doesn’t just entail opening the gates to visitors, but offering them the Thailand they expect it to be.

“What should tourists who arrive do — sit in their hotel room, stay at the beaches and wait? Tourism is an entire flow,” said Stephan Roemer, the CEO of Diethelm Travel Group and Tourasia Switzerland. “While foreign visitors want to enjoy nice weather, no one likes to be locked in a room or a ghost town.”

Hotels, airlines and theme parks can be unlocked systematically, but not a network of small and medium enterprises that has been tightly knitted over years. This is particularly true for Thailand, where locals’ dependency on tourism kept growing as arrivals rose to 40 million last year.

Tourism depends heavily on locals too. “Tourism in Thailand is built on people, their friendliness and open arms to welcome tourists to their country. These people cannot just be called back when required. They were forced to look for other incomes to sustain their survival. There is already a huge loss of know-how and service providers,” said Roemer.

What do you Miss?

Skift asked tour operators based in Thailand the question: Where have you traveled in Thailand since domestic travel reopened in May and what do you miss?

“I took the chance to travel in Thailand extensively these past months, from North to South and East to West. Touristy areas are indeed deserted, many places have put up the For Sale sign, making clear that closure is not temporary. It is a sad picture whether you are in Chiang Mai, Krabi or Phi Phi Island. Tourism supports small and medium enterprises to a large extent, many indirectly, and millions of employees have lost their jobs,” said Laurent Kuenzle, CEO of Asian Trails Group. By contrast, here is a crowded scene at food stalls on one of Phuket’s side alleys, Soi Bangla, pre-pandemic. Source: Flickr/Shankar S

Willem Niemeijer, founder of Yaana Ventures and Khiri Travel, has been to Sukhothai, Chiang Mai, Chiang Rai/Golden Triangle, Hua Hin, Nan province and his lodge in Khao Sok, Surat Thani. “We missed the interaction with locals, outside the hotel. In Hua Hin we missed people on the beach — none of the beach chair operators was open for business. Thais typically avoid the sun and venture out only early mornings and late evenings for photo ops. We missed the markets, souvenir sellers and local massage shops, while the bars that were still open were soulless affairs. This was even more apparent in Chiang Mai and Chiang Rai, where most tourism-related businesses and restaurants we found shuttered.

“In Nan, the walking street was open and very nice. However it seemed to us this was not a great money spinner for anyone,” he said. Nan is visited by domestic travelers and rarely by international tourists.

Hamish Keith, CEO, Exo Travel, has travelled extensively in Thailand, not only to the major resort destinations but lesser-known areas close to Bangkok such as Nakorn Nayok, Rachaburi, Rayong, Nan, Chanthaburi, Chumphon and other provinces that “have great natural attractions and a rich culture.”

“What is very clear is that big resort destinations such as Phuket, Samui and Pattaya with extensive tourist infrastructures are desperately missing foreign visitors, and empty hotels, boarded-up restaurants and a complete lack of vendors and street life have transformed once vibrant destinations into strange shadows of their former selves.”

The key to rebuild the tourism ecosystem goes back to the bigger issue of having a strategic plan to reopen the country to international visitors. It should include a scheme to revive small businesses by, say, underwriting loans at preferential conditions without collateral, said Kuenzle.

“The longer it takes to get this in place, the harder it becomes to recover as more businesses are going to close forever,” said Niemeijer. “At the moment, there is no sign at all of a confidence-inspiring reopening of some sort, for example, a travel bubble.”

Thai tourism industry has resigned itself to a bitter winter season as a government program to attract long-stay tourists from China and Europe under a Special Tourist Visa isn’t a big hit, either due to onerous conditions or a new wave of lockdowns in Europe itself. 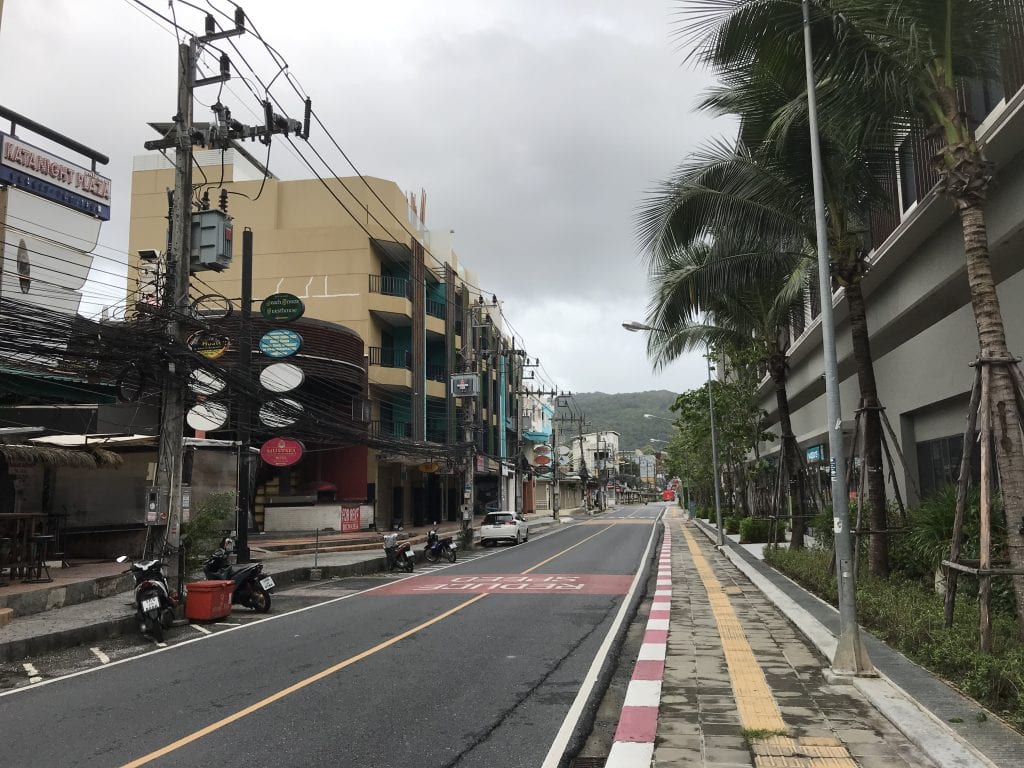 The government is now mulling a reduction of quarantine time for foreign arrivals to 10 days, from 14. There’s also the possibility of a no-quarantine travel bubble with 22 low-risk China areas.

But these remain work-in-progress. As is a plan for a tourism recovery fund of up to $3 billion (100 billion baht) to help small businesses and travel companies.

The hope is that with some government aid, and Thais’ entrepreneurial spirit, the streets will hum again quickly once tourists return.

“They [the streets] may look different and it is heartbreaking to see so many local businesses shut down, but they will grow again,” said Exo’s Keith.

But will street life change to suit needs of markets that are allowed in first, likely China and other Asian countries, which may alienate other sources in future?

“It does look likely that China will return before Europe or North America but considering Thailand has been comfortable in handling multiple markets for many years I don’t see its tourist-facing character changing permanently,” said Keith.

Niemeijer, however, believes that overall, it is a mistake to single out a few countries for reopening without a clear roadmap to open others, a point echoed by Diethelm’s Roemer.

“If you open to some and restrict others, the ‘others’ will look for alternatives and this won’t be for just a short time. There needs to be a clear timeline for border openings, considering that travel planning is done on average six months ahead,” said Roemer.

“Long-stay clients of Thailand and retirees are opting for other destinations. Families are also planning next year’s holidays in Egypt, East Africa, Indian Ocean or Caribbean.”

One good that could be derived from newly-deserted areas is a chance to rebuild better. In this, everyone agrees that what is needed are sustainable rules and regulations and, most importantly, enforcement.

“Many provinces do want to be more sustainable, do want to protect their natural resources. The biggest challenge is corruption [and there goes the enforcement],” said Kuenzle.

There is also a chance for Thailand to make good on its goal to spread tourism to less-visited provinces and prepare these areas for a return of tourists.

“It is likely that regional tourism will restart first, followed by the more adventurous Western travelers who are eager to discover more local experiences. There needs to be a concerted effort to promote lesser-known provinces and make them accessible,” said Keith.

Public transport is “not at all concerned or focused on tourism,” which makes it hard for independent travelers to go beyond the major cities or resorts without using expensive private transfers, he said.

Tour operators of course aren’t getting questions from clients about dead streets — likely this wouldn’t even occur to them.

Their main questions remain, When are borders opening? What are the restrictions?

“We need plans with timelines on how to reopen tourism even if they have to be re-adapted to changing situations. We need plans that bring in numbers so the tourism economy can restart,” said Kuenzle.

That has been the clarion call since May. Looks like life on the soi’s won’t ever be the same.