Travel is the world’s largest industry by being the world’s largest employer, in direct and indirect ways. A large part of it is people working the frontlines; it is the labor at airports, airlines, hotels, tours, and more, that move travel in all possible ways. And yet discussions of labor have always been muted, particularly in the media. 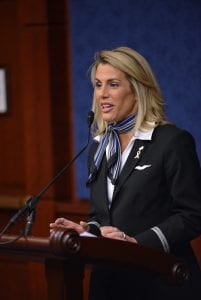 There’s no better person to discuss this than Sara Nelson, whom the New York Times recently described in a big headline as “America’s Most Powerful Flight Attendant.” She will be a guest on my weekly The Long View livestream at 3 p.m. ET this Friday, live on video (also available later on-demand to watch).

Nelson has served as the international president of the Association of Flight Attendants-CWA, AFL-CIO since 2014, and has played a key role in securing relief funds for the airline sector from the U.S. government.

Her union posts include local officer positions, national strike chair, and national communications chair. She first became a union member in 1996 when she was hired as a flight attendant at United Airlines and today she represents 50,000 of aviation’s first responders at 20 airlines.

As you will see when you tune in, Nelson is not afraid to speak her mind. So expect the conversation to be engaging and newsworthy.

Join us at 3 p.m. ET this Friday, live with Sara Nelson.