NeueHouse is set to grow and bring its intricate form of hospitality around the world. It turns out creating a truly customized experience for members is a lot of work.

In their race to conquer the global market for co-working, companies like WeWork have expanded around the world while offering a limited set of services to tenants. They are also under financial pressure as a result of offering generic spaces without much differentiation or custom programming.

NeueHouse, though, has taken a different approach to growth as it opens just its third location in Los Angeles’ iconic Bradbury Building. NeueHouse CEO Josh Wyatt, the co-founder of Generator Hostels and former Equinox Hotels chief, thinks upscale co-working spaces with embedded cultural events represent something of an antidote to the norm in the sector. Just don’t call your local NeueHouse a co-working space.

“We’re not a co-working company, we’re an experiential hospitality-based company that provides private members with work space,” said Wyatt. “That distinction, and how that evolves, is a really important differentiator versus the 10 other companies that are sitting in the middle [of this space].”

Skift spoke to Wyatt about transitioning from the challenge of designing experiences, building spaces for creative workers, and the trends defining the future of business travel and creative events.

Skift: A lot has been made about co-working companies being property technology upstarts, raising a bunch of money, and then building tech platforms. Your background is in hospitality and experiences. These two things seem somewhat opposed in nature.

Josh Wyatt: There are a lot of people talking big games, and what they’re forgetting is at the end of the day, if you are truly selling yourself as a hospitality experience, you’d better have two things: hospitality and experience.

I’m a hotelier by background. I’ve also owned restaurants and nightclubs so I understand what makes people feel good, whether it’s an eight euro a night bed in a Generator or an 850 euro bottle of Belvedere in my nightclub in Verbier. There are certain things that have to get done in a shared work space that anyone can do. WeWork, those guys, you can have a desk, you can have Wi-Fi, you can have a hot coffee. That’s basic, right? I think everyone needs that, just like a [traveler needs a] bed.

But if you’re going to call yourself a prop tech platform, that means that your tech had better deliver something that’s truly unique and actually makes the customer experience frictionless, right? So, I could buy into the prop tech example of someone saying, ‘Hey, we are going to be a frictionless platform where you plug in, and the minute you become a tenant or a member of the space, all the sudden all of your technology needs are met and it’s at the touch of a phone.’ It’s just so easy that I walk in and within 10 minutes I’m up and running so I don’t have to do anything else.

I don’t know of anyone in the space that actually delivers on that promise. They say they do, but no one delivers on it.

Skift: You are all about the experience, but technology still matters, right?

Wyatt: What we say is, look, we’ll get the base level technology right and we’ll help you out, so we have some very cool features. The Eleven that we just launched has wireless charging, so you put your phone on the desk, which has no wires. Yeah, you can buy a wireless charger on Amazon for $10 but this is actually layered in with incredible high-touch hospitality moments. 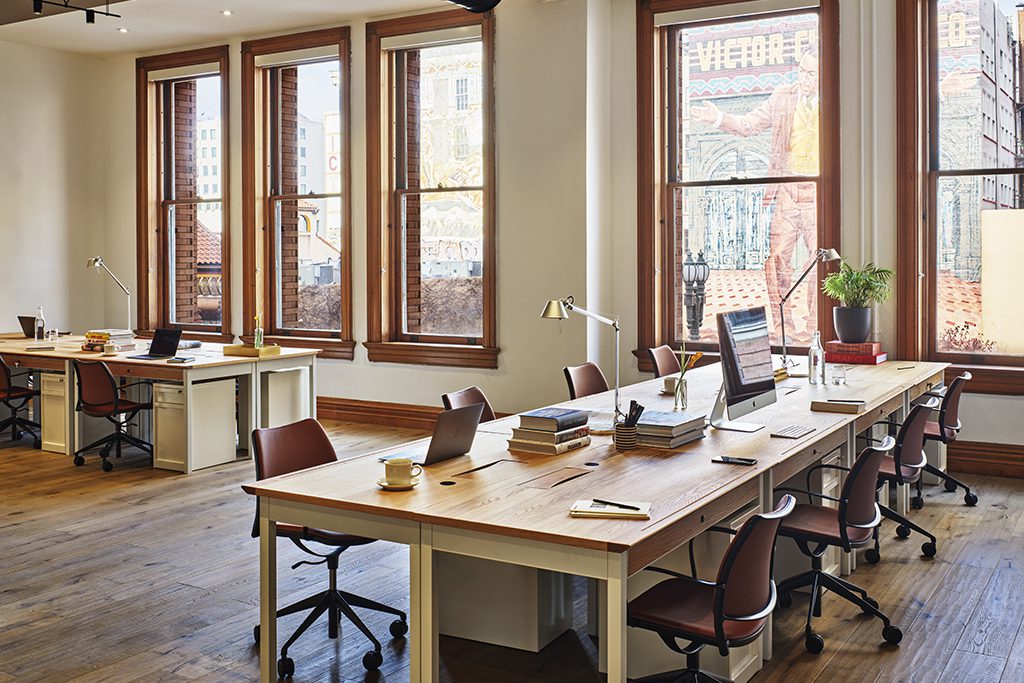 We try to think about it like if you were walking into a great luxury hotel or an Equinox. What is happening in those spaces to make it feel really special? It’s a combination of great design and great people serving you, so most of our employees come from high-end restaurants and hotel groups.

Skift: So how exactly do you bring that hospitality touch into the world of work?

Wyatt: We’ve gone after really high-touch people who understand the concept of hospitality and then fused in the everyday interaction of what that means in terms of experience.

We were in Eleven today, and our front desk person asked to take our coat. After experience and hospitality design, we have content programming, like true world-class stuff. … I can give you a hundred examples that this is a real, legitimate world-class program.

This is not like, hey, I’m going down to the corner and getting a yoga instructor to come up or someone to go around with a guitar. This takes a lot of time and a lot of money — you couldn’t scale that. I liken it to making independent movies. If you think about those movies, the ones that get the most amount of attention or love from the award ceremonies are the ones where the director, the producers, the actors, and the screenwriters have really spent a lot of time considering what are the messages that they’re sending. It probably will do fine, it won’t make a ton of money, but it will do just well enough if it’s done in the right pitch versus some of those studio blockbusters.

Skift: Co-working companies have raised billions and expanded quickly around the world. Yet NeueHouse’s growth plans are much more reserved. How can you stand out when so many players are competing?

Wyatt: This is the lifestyle business, not a gym business. We’re not a co-working company, we’re an experiential hospitality-based company that provides private members with work space. That distinction, how that evolves, is a really important differentiator versus the 10 other [companies] that are sitting in the middle [of the co-working space].

I mean look, that’s why this stuff takes time, right? It is a labor of love. Like the Bradbury building: If you look at the layers and layers of moments and thoughtfulness behind the experience, this is done by a team that is extremely dedicated to creating those moments, and it is hard work — it’s not for the faint of heart.

If we have 20 houses in 10 years, great, no problem. I’d be very, very happy with that, by the way. I still think this is a billion dollar concept. These are very big properties in hybrid entry markets; Soho House was valued at I think $2 billion, you know, and they have probably about 36 Soho Houses right now. They’re opening a ton in the next year, but it took [Soho House founder Nick Jones] 20 years to build, and I guess rightly so.

Skift: Every company is trying to be a lifestyle company, though. There are now a hundred hotel brands boasting about lifestyle. How do you build a membership product built around lifestyle when the space is kind of overcrowded right now?

Wyatt: This concept of lifestyle is absolutely viable if you genuinely mean it, like if you have a genuine sense of purpose and you think about what your values are as a leadership team or as a leader or as a CEO and you say, look, we’re going to craft these values for our community and really stand behind them.

I go back to my comment about the layering in programming, the layering in design, the layering of service and hospitality. All that is done to make our members’ lives better. If I walked in and I was not CEO of this company, I would absolutely be a member right away because it ticks all my boxes. I love art, I love fashion. I love entertainment and I love to be around people who are fascinating, right? Skift: We’ve done a lot of work examining how subscriptions and memberships are coming to travel. What are your thoughts on the mainstreaming of these types of products and how they fit into the world of travel?

Wyatt: If you think about the word subscription versus membership, subscription is you’re taking something, right? Membership, you’re doing actually a lot of things together with the organization that you become a member of. We fully expect people to take, but they’d better bring something. It can be a conversation, it can be a connection, it could be an idea, it can be a programming event. Whatever it is, out of all that primordial soup something is going to be built, right?

That to me is the definition of a good membership experience. If you look at how membership has evolved, if you look at the space specifically and how it translates into business travel, what I can tell you is that high-performance creative individuals can no longer be in one city.

At the end of the day it all comes down to friction and if you can eliminate, from an efficiency perspective or productivity perspective, that friction. Whether it’s physically sitting in the office or from a travel perspective, you’re hopping into three or four big cities in the U.S. and you can plug right in knowing you’re good to go. That’s a great place to be.

On the other side of it, intellectually, I would say actually that you’re allowed to create positive friction within your mind, your ideas, and your team. That positive friction is what leads to great ideas or great companies. If you can get less friction on the hospitality and productivity side and more friction on the intellectual creative side, you’re going to create a great company or product. That’s where the world is going.