Can an independent hotel group with just three properties now survive as the industry keeps consolidating? If the brand is Soneva, yes, and new backing is taking it forward.

Just when you think “barefoot luxury” hotel brand Soneva is enjoying the slow life, a new significant minority stake in the company by Singapore’s sovereign wealth fund GIC and U.S.-based private equity firm KSL Capital Partners will see a spurt of expansion that will double the number of Soneva properties in three years.

Sources tell Skift that GIC and an affiliate of KSL are in partnership for a 35 to 40 percent stake in Soneva Holdings, following the exit of Sailing Capital upon the end of its five-year term, which its CEO Liang Tsui said had “delivered a healthy return.” Soneva founder, chairman and CEO of the group, Sonu Shivdasani, and his wife Eva, hold the rest of the shares in the company.

The two funds will infuse up to $200 million in cash for Soneva’s planned expansion in the next 36 months. Three new resorts, two in the Maldives and one in Okinawa, Japan, have been pre-approved.

What’s more, they will allocate $30 million of growth capital in Soneva Holdings that would go towards enlarging or upgrading existing assets and facilities/services, sources tell Skift.

As part of this new funding, a separate property company will be set up to develop the new properties. For that company, Shivdasani has pledged 50 percent of the shares of two resorts, Soneva Fushi and Soneva Jani, for a 50 percent share in the new company, with the other 50 percent held by GIC and KSL.

GIC could not be reached for a comment at press time. Tina Yu, a principal partner at KSL, declined to comment beyond her official press statement. “The more we have gotten to know Soneva, the more excited we are about the opportunities to help Soneva grow.” .

“At KSL, we invest solely in travel and leisure, and we recognize the power of the Soneva brand platform in the expanding market for luxury experiential travel,” Yu added. “Soneva has 25 years of experience operating at the very highest level and have been pioneers in creating rare authentic experiences for their guests. We look forward to a long and successful partnership with Soneva and its management team.”

Denver-based KSL, which bought Outrigger Hotels & Resorts in 2016, is understood to be keen to grow in Asia and sees its significant minority investment in Soneva as one of its first platforms for growth in the region.

When Shivdasani decided to take back the Soneva brand and sell Six Senses Hotels Resorts Spas to Pegasus Capital Advisors in 2012, a key question was whether an independent company with a single brand and just three hotels — Soneva Fushi and Soneva Jani in the Maldives, and Soneva Kiri in Thailand (Koh Kood island) — could grow significantly on its own.

Six Senses has since been sold to InterContinental Hotels Group, while Soneva has been as quiet as a castaway island.

But Shivdasani’s decision to split with Six Senses, a chain that grew out of Soneva, was made so that he could devote all his energies to the development of Soneva hotels, which he said is his “first love.” 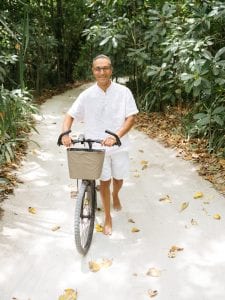 The latest partnership is an impetus to growth, particularly when KSL is “an industry specialist” compared with the three private equity funds — Deutsche Bank, Pegasus Capital Advisor and Sailing Capital — which had previously invested in Soneva, he said.

“What I’ve found in the past with some of our private equity partners is that sometimes they don’t understand the industry to the same extent, so it’s difficult for them to benchmark. The follow-on capital was a bit more difficult, whereas given KSL is focused on travel and tourism, follow-on capital will be easier,” he said.

Of the three new Soneva projects, the first in the Maldives will be on an island in the north. It has been fully designed and is expected to finish construction by 2021.

“There will be new concepts for the two projects in the Maldives. We’re not going to do another Soneva Jani or Soneva Fushi. Even those differ — Jani is a lagoon while Fushi a jungle. These other two will have different twists. They will be luxury but we will explore new territories that current ones don’t touch,” he said.

Asked if he or new partners have expansion targets, Shivdasani said, “Not really. It will be based on the right opportunities and that’s what I think differentiates us from other brands. As Six Senses, we were managing other people’s properties. Now as owner-operator, it does mean slower expansion but if we can carefully select where we go, it will bring better returns on our energies.”

He believes Okinawa will become the south of France or the Miami of the Far East, offering the beach and stable environment where the rich can buy a second home. “There’s obviously the Philippines but it does not have the political stability as you have in Japan. Then there are destinations such as Sri Lanka, but they are not really a Soneva destination,” he said.

Soneva may be small, but its innovations have struck a chord with the super wealthy, who love its ‘Intelligent Luxury’ philosophy, ‘No News, No Shoes’ mantra, ‘Slow Life’ chant and its sustainability drive, launched way before the “s” word became so common and is what gives Six Senses its edge.

According to Shivdasani, Soneva’s top 100 clients account for 40 to 50 percent of revenues. They arrive in private jets and spend between $100,000 and $1 million.

Observed Robert Hecker, managing director Pacific Asia, Horwath HTL: “Soneva is only three properties currently, but the level of its reputation and awareness among luxury resort travelers goes well beyond what might be expected from such a limited portfolio. It really stemmed from Soneva Fushi, which was the pioneer and trendsetter for luxury resorts in the Maldives, and of course, the origin of Six Senses.

“Soneva Fushi continues today with a high quality reputation and high repeat guest factor demonstrating its resonance with the luxury resort set. Soneva Gani has expanded upon it. Soneva Kiri has not had quite the same level of impact, but is a worthy property under the brand.”

Soneva Jani rakes in an eye-watering average rate of $3,500 and an average occupancy of 70 percent, making it the RevPAR (revenue per available room) leader in Asia, according to Shivdasani, who is doubling the size of the property and adding a wellness center.

At Soneva Fushi, which turns 25 years next year, eight new water villas will open by April, the first time the property fields water villas. The spa, the first extensive spa in the Maldives, will also be upgraded.

Hecker said the best way KSL could add value to Soneva is to expand the brand network.

“On their own, Soneva would likely have a tough time growing significantly, like most small hotel/resort companies. They typically do need a strong financial partner to support expansion. KSL can serve that role and would seem an ideal partner to do so.

“There’s probably still some incremental value to be gained from the existing Soneva properties, particularly on villa development/sales, but the biggest value opportunities would come from further expansion with new properties.”

Not Just a Resort Player

Europe is on Shivdasani’s mind for both resorts and cities. “We own a site in Greece. We also like Ibiza (Spain). And cities such as London, Paris, and New York.

“We’ve seen a shift in these cities in the last five to 10 years. The economies are growing by 1-2 percent per year, while the communications technology is improving 20 percent per year. It means demand for corporate travel has dropped considerably. Instead of going for a meeting, people do Skype call or video conference. So that leaves a vacuum for the leisure travelers who are a good form of travelers because they spend on theaters, restaurants, museums.”

He recalled years ago when he was a partner in Zuma and the investment for that London restaurant was $1.9 million (1.5 million pounds). “Today, investors are spending $25 million on a restaurant in London because they know the numbers are there,” said Sonu. “So the cities become more attractive, and you get leisure travelers coming in. It’s a virtuous circle.

“We like cities, and we know billions more people are coming into the middle, upper middle and super rich [classes] in the next decades. They all want to go to places such as London, New York and Paris, and you can’t triple or quadruple those areas. That’s why I also think the Maldives would run out of islands. It’s why we remain bullish on the Maldives,” Shivdasani said.

Daniel Welk, managing director of Hazana Hotel Advisory in Singapore, observed that hotel investment in the Maldives continues to be in high demand, generating a “healthy, high single digit returns on capital for owners.”

“These type of returns, while under short-term pressure from a supply and demand imbalance, appear set to continue, with arrivals to the country in 2019 on track to hit a new record of 1.6 million and the planned improvements to the Male airport providing greater accessibility for traditional and emerging markets,” said Welk.

“That said, owners have to appreciate that the Maldives is not an easy destination to operate resorts,” Welk added. “Supply is growing at a rapid pace and with greater competition and more and more international brands entering the market, it is essential that owners have a quality partner for their resort, one that provides a diverse distribution platform, focused on penetrating the emerging markets to the destination.”