Skift Take
Webjet has really transformed its business over the past few years through a couple of sizable acquisitions. The Australian consumer market is proving pretty tough, so pursuing a strategy of global expansion in the wholesale arena makes sense.
— Patrick Whyte
Share
Tweet
Share
Post
Send

It was only a couple of years ago that Australia-based travel company Webjet made a tiny proportion of its profit from business-to-business sales, but in just a short space of time its WebBeds unit has grown to become the number two global player, contributing $46 million in profit (EBITDA).

“Unlike the Webjet of six years ago that was highly focused on the AU [Australian] domestic market, the expansion of our business into the B2B world globally means that we’re not reliant on any customer, market or supplier segment,” said managing director John Guscic on an earnings call on Thursday. 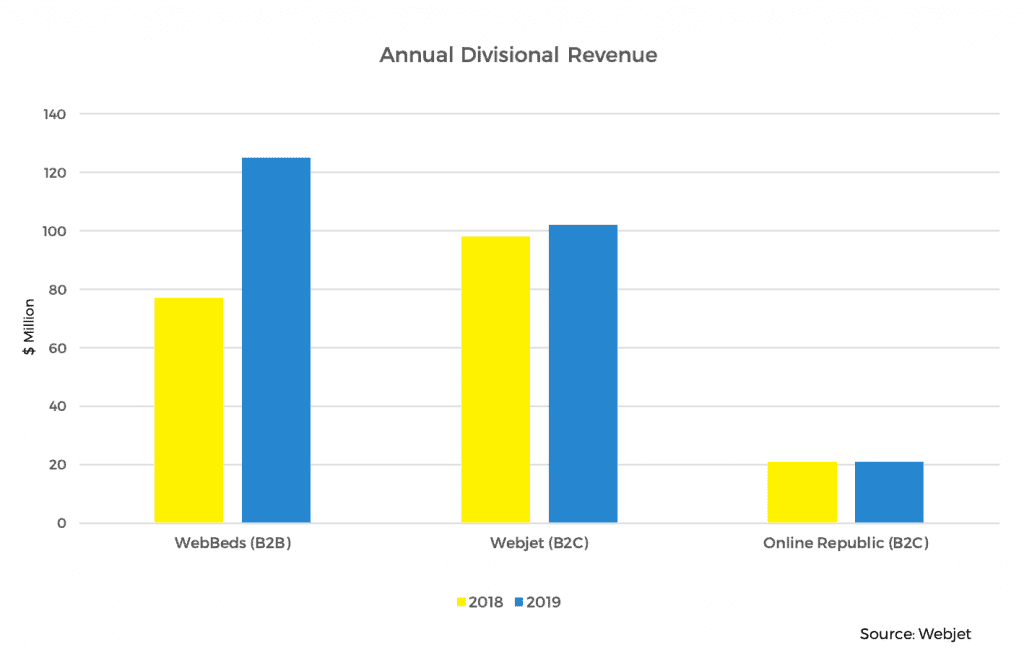 The acquisitions of UK-headquartered JacTravel and Dubai-based Destinations of the World have helped fuel Webjet’s wholesale boom and it sounds like the buying spree might continue.

Asked about further M&A deals, Guscic said: “The thought process is that we are still under 4 percent of the entire market. We have 30,000 directly contracted hotels today I would like to increase that number and I would like to distribute our product across every travel vertical and every geography. And we’re not massively penetrated in any market.”

He added that while the integration of JacTravel into Webjet wasn’t perfect, the process with Destinations of the World went much better, which had given the company “an increased level of confidence around making further acquisition in the B2B space.”

It was mostly good news for Webjet with rising profit and revenue in 2019 but one blip is the performance of its partnership with struggling European tour operator Thomas Cook.

In 2016, Thomas Cook announced an outsourcing deal with Webjet covering around 3,000 direct hotel contracts. Webjet said the performance of the Thomas Cook partnership was below expectations and that next year it was cutting its total transaction value estimates from $203-$304 million to $101-$135 million.

Despite the significant downgrade, Guscic expects the deal with Thomas Cook to remain in place whatever happens with its potential change in ownership and that it “will deliver the same expected outcome”.

Shares in the company fell 8.3 percent following the results announcement despite the company saying it had enjoyed a “strong start” to the new financial year.