Caesars Doubles Down on Its Non-Gaming Strategy With New Brand 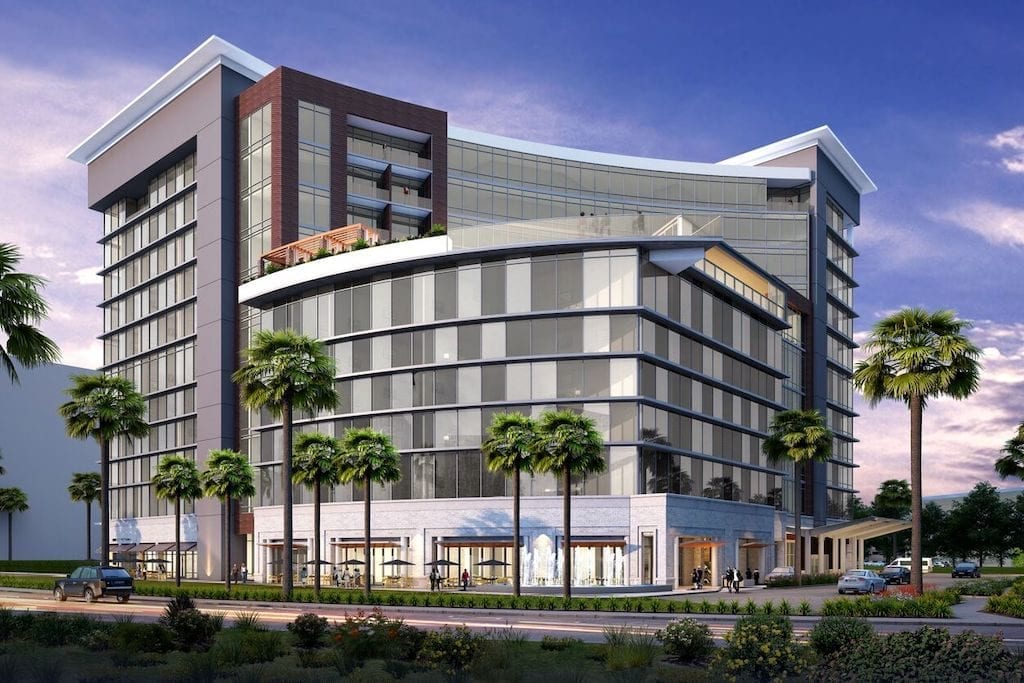 You can bet the incredible brand recognition of the Caesars name will still prove to be a double-edged sword as Caesars tries to delve deeper into the non-gaming space.

Caesars Entertainment, the Las Vegas-based company best known for its eponymous Caesars Palace brand, is committed to diversifying its portfolio beyond its 47 casinos with its newest brand, Caesars Republic.

The brand, Caesars’ first purely non-gaming hotel brand ever, made its debut during the annual Americas Lodging Investment Summit in Los Angeles this week, with the very first property slated to break ground in Scottsdale, Arizona, by the end of this year.

“[Caesars Republic] has much of the same look you’d have in a Caesars Palace that has gaming, but you remove the gaming and you’re left with a great culinary experience, great music and entertainment, and live performances,” said Marco Roca, chief development officer for Caesars Entertainment. “It’s all the fun you’d have in the Vegas property, minus the gaming.”

The launch of Caesars Republic comes more than seven months after Caesars announced it would license four of its brands — Caesars Palace, Flamingo, The Cromwell, and The LINQ — to hotel owners and developers that want to use those brands to build hotels and resorts worldwide.

Since then, Caesars has opened two beachfront Caesars-branded resorts in Dubai: a Caesars Palace Blue Waters Dubai and a Caesars Resort Bluewaters Dubai. It has also signed a deal to develop a non-gaming Caesars Palace resort in Puerto Los Cabos, Mexico.

The motivation behind launching a non-gaming brand like Caesars Republic, Roca said, was driven by consumer demand, and that non-gaming revenues are driving the company’s business, even in traditional gaming destinations such as Las Vegas.

“Millennials are no longer interested in a hotel that’s just a basic hotel offering with rooms and a bar and a three-meal restaurant,” Roca said. “They want curated experiences and shareable moments. The demand for more than just a nice, clean room is there. People have begun to look for things that are other than your basic hotel experience.”

In June, Robert J. Morse, president of hospitality for Caesars Entertainment, told Skift, “More and more of our business is non-gaming related. Our group business, our FIT [fully independent traveler] business, I mean, if you saw surveys now, over 20 percent of people who come to Las Vegas say they have no plans of gaming at all.”

“Every single year, the portion of revenue coming from non-gaming is outpacing gaming now, particularly when you look at the customer statements of where that’s coming from,” Caesars Entertainment Vice President and Executive Associate of Hospitality, Dan Thaler, said in June. “Most people, historically, thought of Vegas as gaming and then everything else around it. Now, gaming is just one piece of the broader offering.”

Roca noted, “Developers are looking for alternatives and this is why these lifestyle hotels are popping up. Caesars Republic is for people who really want the experience, minus the gaming.”

And for Caesars Entertainment’s Total Rewards loyalty members, the ability to earn and redeem points outside of destinations such as Las Vegas and Atlantic City, will also be welcome, Roca surmised.

“We have 57 million loyalty guests and they are asking us to be able to burn points in locations other than traditional gaming,” he said. “They want the same experiences they enjoy in Las Vegas, somewhere else. If I earn those points in Vegas I’d like to burn them somewhere else.”

When asked if the debut of Caesars Republic complicates Caesars’ existing loyalty partnership with Wyndham Hotels & Resorts, Wyndham CEO Geoff Ballotti told Skift, “No, not at all. I think it’s still very complementary.”

Not only that, but the 266-room Scottsdale property will open right next to a luxury retail center, the Scottsdale Fashion Square, reflecting another emerging trend in the hospitality space: the hotels located within or within walking distance of malls to form comprehensive mixed-use entertainment and lifestyle campuses — minus the casinos.

Caesars Republic is also different from other Caesars-branded properties, Roca noted, because it will always be a brand whose properties are purely non-gaming.

It’s also more limited in its services than a traditional Caesars Palace or even a Caesars Resort or Caesars Hotel would be, and Roca classified it as an upper upscale lifestyle brand that’s meant to work both for newbuilds and for conversions in gateway cities such as New York, Los Angeles, Hong Kong, and Tokyo.

Caesars Republic, however, has no casinos, and “more limited food and beverage outlets, although still with celebrity chefs” as well as entertainment. “It has a more reduced footprint and more reduced entertainment offering,” Roca said.

When asked if the Caesars name may cause confusion among consumers who associate “Caesars” with casinos and gaming, Roca said, “We’re not concerned at all. We don’t feel that at all because of the locations where this product is going.”

Not only that, he said, but Caesars Republic will stand out among its competitive set. “We’re not a ‘me too’ hotel company,” Roca said. “It’s not the same basic hotel offering. It’s not a boring three-meal restaurant. It’s all about edge and entertainment, and taking this to the next level.”

Whether Wyndham’s Ballotti sees Caesars Republic as competition or not, however, it’s clear that the more Caesars develops its non-gaming hotel development, it is, at some basic level, competing with other well-established hotel companies such as Wyndham, Hilton, Marriott, and Choice Hotels, among them.

And its success in this space will rely heavily on finding the right developments and owners, as well as ensuring clear and understandable branding and marketing going forward.