LVMH might not have been the most obvious of suitors for Belmond's luxury assets, but now that it's close to owning them, it's a deal that makes a lot of sense in this post-experience economy still contending with the concept of new luxury.

In the luxury hotel space, AccorHotels and Marriott have some new competition.

French luxury conglomerate LVMH, the company behind such iconic brands as Dom Perignon and Louis Vuitton, wasn’t the most obvious of suitors for the storied Belmond collection of 46 luxury hotels, trains, and cruises, which were formerly known as Orient-Express.

In fact, most in the real estate and hospitality and travel industries assumed that the usual suspects, such as Blackstone, KSL Partners, or maybe even Hilton, would wind up owning a piece of Belmond.

But now that LVMH has officially inked a $2.6 billion all-cash agreement with Belmond, its move to make Belmond a part of its relatively small but growing hospitality business makes all the more sense as LVMH hopes to “reach a critical mass in the ultimate hospitality world,” as Chris Hollis, LVMH director of financial communications, remarked during a Friday conference call regarding the acquisition.

Why This Deal Makes Sense

In addition to owning brands like Christian Dior, Hennessy, Veuve Clicquot, and even cosmetics retailer Sephora and luxury luggage maker Rimowa, LVMH has its own relatively small but growing hospitality unit that includes the Cheval Blanc brand of four maisons and the Bulgari brand of hotels, which is distributed via a partnership with Marriott International and has six locations.

As luxury consumer tastes evolve and the desire for more experience-driven luxury grows as Millennials and Gen Z dominate the market, it only makes sense that LVMH would explore luxury experiences beyond products or hard goods.

LVMH Chief Financial Officer Jean-Jacques Guiony said on the same conference call Friday that LVMH was moved to buy Belmond not because it saw a lack of “opportunities in traditional luxury goods” but because “the future of luxury will be not only in luxury goods as it’s been for many, many years but also in luxury experiences and we want to be in both segments, which is as simple as that.”

“This is a great move for LVMH and helps to solidify the future of Belmond,” said Becky Powell, president of luxury travel agency Protravel International. “Consumer interest is shifting from goods to experiences and this acquisition positions LVMH to bring the two together — exclusive goods and unique properties — a marriage that will give them the opportunity to create incredible experiences.”

As for concerns about Belmond’s financial struggles over the past few years, Guiony didn’t see them as a hindrance to LVMH’s ability to turn a profit from the transaction.

The 42 percent premium that LVMH is paying for Belmond doesn’t appear to be extravagant, either.

“LVMH is not overpaying for Belmond,” said David Katz, managing director at Jeffries. “These are iconic trophy level assets. Our view right along is that the amount they earn or the multiple paid would be far less relevant then the trophy qualities of the assets and the demand for them would be high.”

Katz also said that, in his opinion, Wall Street may likely be pleased with the transaction.

“I can’t speak for how shareholders will react today, but what I can tell you is what our view is,” he said. “When we upgraded the stock, and put a buy on it after Belmond announced it was seeking strategic alternatives, we got to about $24.” LVMH is paying $25 a share.

The financial synergies of this deal, which Guiony said would be particularly hard to quantify, given that LVMH’s existing hospitality business is so small, might not be clear, but what is clear is the highly complementary nature of LVMH’s luxury brand portfolio to Belmond.

“It’s very clear that there are a lot of cross optimization that’s going to promote between our wine and spirit business and Belmond,” Guiony noted. “Some of the luxury hotels also have boutiques of luxury brands, so that’s another fairly obvious avenue. Client events, both Belmond clients or LVMH’s clients, could help each others’ locations.”

LVMH’s work with building the Cheval Blanc brand, which it launched in 2006, also bodes well for the future of Belmond, said Melissa Biggs Bradley, founder and CEO of luxury travel agency Indagare.

“As a longtime member of Belmond’s Bellini club of top travel agents and someone who loves many of their properties, I view LVMH as a dream acquirer,” she said. “They have an incredible track record of evolving and protecting heritage luxury brands like Louis Vuitton and Dior and in recent years, they have established themselves as an important hospitality player at the highest end of the market with Bulgari and Cheval Blanc.”

She added, “What has been most exciting to see with Cheval Blanc is how they are raising the bar with luxury experiences within a hotel setting whether that is in customizing and expanding the bathroom amenities or incorporating art and cuisine pop ups or even surprising guests with framed photos from their holiday in their rooms. It will be fascinating to see how they bring this experience ‘alchemy’ as they call it to some of the world’s most storied properties, which have amazing bones, locations and legends but need some modern innovation.” What LVMH Intends to Do with Belmond

Retaining Belmond’s iconic history and heritage seems paramount to LVMH, as is growing the relatively new brand of Belmond itself, which was launched in 2014 after the company lost the rights to use its former Orient-Express brand name. So, don’t expect the Belmond brand to go away.

In fact, LVMH, Guiony said, is committed to following Belmond’s strategy to double its portfolio of properties by 2020, and is even more so committed to building up the brand itself.

“The Belmond brand is emerging,” he said. “It’s much better known than it used to be, but it’s a fairly new name in the industry. Some investments have been made, some investments will be made, but it’s very clear that the recognition of the name is not what it could be, having started to develop it only a few years back. So, we will back investments behind the brand. And we will help with our existing products.”

Guiony stressed that LVMH has no intention of selling Belmond’s treasure trove of luxury real estate assets, nor any intention to move its London headquarters or make any major staffing changes. In other words, don’t expect LVMH to play the asset-light game when it comes to its newest pending purchase.

“The fact that Belmond owns an extremely large share and I would say unusually large share compared to peers of the portfolio is in our view a very strong competitive advantage,” he said. “It enables alignment of interest in between landlords and operators, which is not always the case, obviously, when you dissociate the two. And in our view, it’s a key advantage — a competitive advantage going forward with Belmond.”

He later added, “As far as luxury, hospitality and particularly ultimate luxury hospitality is concerned, I think aligning the real estate and the operations is extremely important. So, we will not change this. The reason being that this is a very main reason why we were interested in the first place in this operation.”

And while growth is obviously important for any business, LVMH is more concerned with building brand equity first and foremost, but it isn’t ruling out the possibility of growing the Belmond brand through management contracts or buying up more real estate assets.

“The priority is to develop the brand, to improve the profitability of these exceptional properties and to nurture collaborations with the other LVMH brands,” Guiony said. “This being said, I also mentioned that if we have a hotel management agreement opportunities, we will obviously look at them. And besides, if we end up having opportunities to enlarge the portfolio of owned assets, why not?” 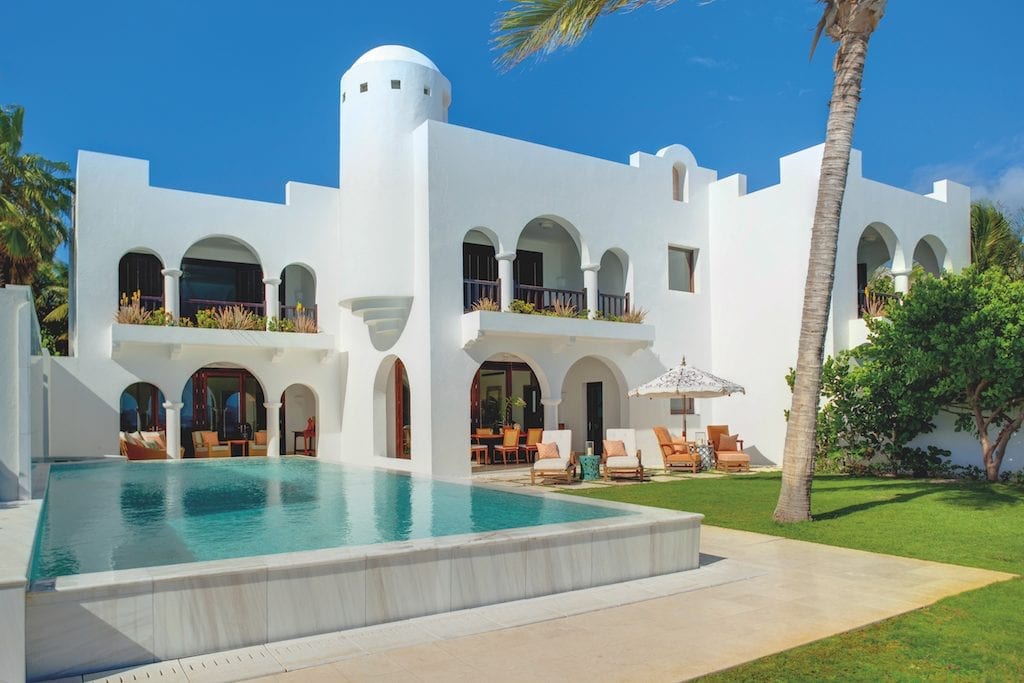 The Belmond Cap Juluca is one of 33 luxury properties in Belmond’s portfolio. Source: Belmond

What This Means for the Future of Luxury Hospitality and Travel

“I couldn’t have wished for a better suitor,” he said. “I would hate to have seen Belmond being sold to a big consolidated brand company like a Marriott or an Accor because I think it would have just gotten lost in the mix.”

The luxury hospitality market, in particular, has been dominated by two players in recent years, Marriott and AccorHotels, thanks to multiple mergers and acquisitions. And with all that consolidation, Ezon feels that the core of true luxury hospitality has eroded.

“I think all these large brands are forgetting about what real hospitality means,” Ezon explained. “They are all committed to ROI and RevPAR (revenue per available room) reports to their owners and not necessarily to hospitality. I know LVMH has a different approach. They are very committed to luxury in everything they do. They are committed to branding. They will allow Belmond to excel in the luxury hospitality business where those big brands will not. We see true luxury hospitality fading in those big brands. Four Seasons, Ritz-Carlton — none of them are the same a they used to be, with the exception of Rosewood.”

“Who knows how to market luxury brands better than LVMH? Their approach to branding and keeping brands specific and true to who they are is heads and shoulders above any other company. There’s leverage on the backend but no one of on the front end recognizes that; no one even realizes that they own all of the brands they do. Marriott is trying to do leveraging on back end, but you feel it on the front end. You don’t see that with LVMH.”

The LVMH-Belmond deal may also herald a new era of consolidation among luxury brands beyond traditional categories, one in which retail brands and travel brands aren’t limited to separate platforms but exist together. And for Belmond in particular, this could be a huge positive.

“It’s been our view that [Belmond] could be or yield better earnings and run more effectively on a larger platform. that’s been our view for a long time,” Katz said. “The current management team has put forth a good strategy but with limited size and resources we still felt that a larger platform ad better resources would yield better operating results.”

Whatever LVMH ultimately decides to do with Belmond — depending on whether LVMH and Belmond shareholders agree to the deal — the luxury hospitality world, and Marriott and AccorHotels especially, will see growing competition in the space for the attention of the world’s most discerning travelers and consumers.

Skift Editor’s Note: This article was updated to include a quote from Protravel International President Becky Powell.