If travelers aren't ready to book, feed them some inspiration and hope they'll hang around until they are. That is essentially what TripAdvisor's new travel feed is all about. Will the grand experiment work? We'll have to wait and see how the feature evolves.

TripAdvisor touts itself as the world’s largest travel website in terms of traffic, but it has a problem: Millions of users browse the site every month and never end up clicking over to an advertising partner or booking anything.

The company on Monday took steps to address the issue, as it launched a new homepage worldwide that provides a content and social feed to those users just stopping by for a look or perhaps some travel inspiration.

The hope is that these particular users will find some content, such as a Travel + Leisure post on the world’s top 100 hotels or a Business Insider story on destinations that can be absorbed in 24 hours, return the next time they are looking for some travel ideas, and eventually book a hotel or a tour when they are ready to do so.

In other words, TripAdvisor hopes to monetize these people surfing for travel inspiration — eventually. There aren’t any advertisements on the homepage for now, but that is subject to change later.

One of the key takeaways from the homepage redesign, which is full of travel content, and publishers and people to follow if users want more, is that TripAdvisor is not letting its new travel feed on the homepage interfere with users who are browsing its hotel, things to do, and restaurants pages, and are close to booking something. The travel feed doesn’t show up on these booking pages so it won’t distract consumers with serious intent to book. 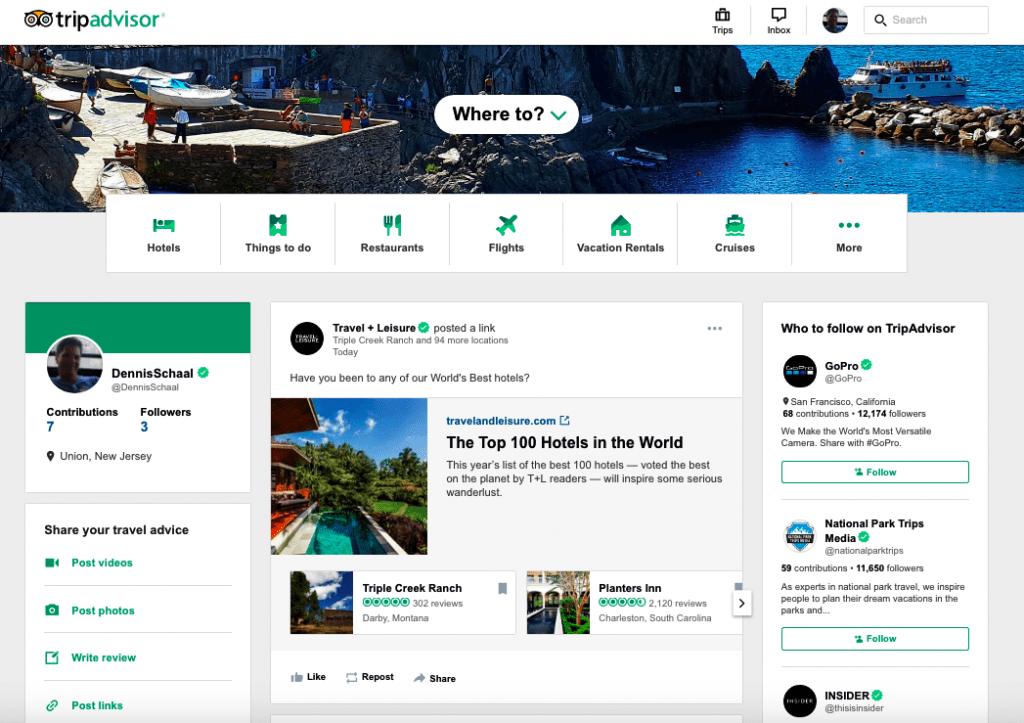 A screenshot from TripAdvisor’s redesigned homepage.

The travel content appears in a large center column; to the left is a column where users can post videos and photos; and a column at the right of the page suggests publishers and sites to follow.

There are tabs on top of that homepage that take users to TripAdvisor’s hotels, things to do, restaurants, and flights pages if they want to focus on these products.

TripAdvisor has signed up more than 1,000 publishers (including Skift) and influencers who  are providing content for the new travel feed, a TripAdvisor spokesman said. The publishers range from Travel + Leisure to National Geographic to Eater and GoPro. The publishers post content and get links to their websites, although some of the links have consumers remaining on TripAdvisor.

There is also a Facebook integration, showing users hotels their friends have stayed at or written reviews about.

With such a broad array of content, some of it is better than others, but that obviously depends on one’s taste. For example, a National Geographic article, The world’s largest artichoke and other giant food, will never make my list of favorite articles, but maybe it would for other users.

TripAdvisor isn’t making any financial forecasts on how the travel feed and redesign may impact its business. But it is taking a step to attack a problem that some of its online travel agency competitors don’t have to the same degree — how to gain the allegiance of users who just want to read reviews or see what inspires them. Hopefully for TripAdvisor, it will turn these casual browsers into bookers at a later point.

Disclaimer:  Skift is one of the publishers participating in TripAdvisor’s new travel feed.

Photo credit: TripAdvisor redesigned its homepage for people looking for some travel inspiration. Pictured is a tourist on top of Table Mountain in Cape Town, South Africa. Gilbert Sopakuwa / Flickr