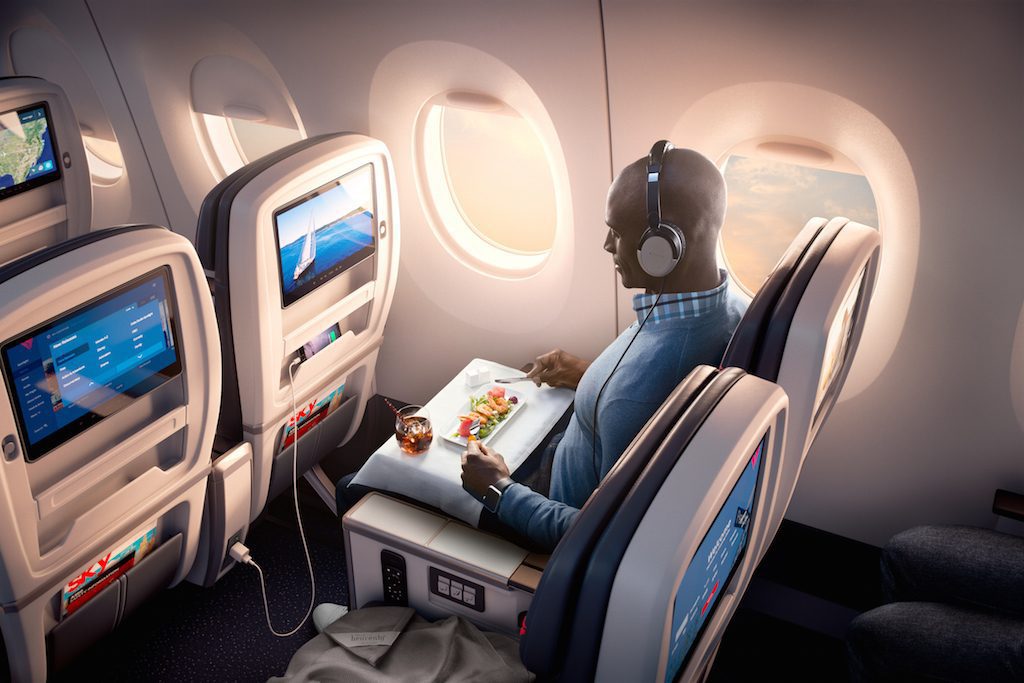 Travelers hoping for more free first-class upgrades should probably root for a recession. The economy is too strong for airlines to give away their best seats for free.

It’s not always accurate — most airlines have made improvements to coach in the past five years, though they have shrunk legroom and bathrooms — but it is true carriers have invested more up front than elsewhere.

As Delta Air Lines’ executives made clear Thursday on their third quarter earnings call, premium passengers get the spoils because they’re profitable. With a strong economy, corporate customers, business travelers and wealthy leisure passengers are increasingly splurging for premium seats, a development that is keeping Delta’s profits steady despite higher fuel prices.

Delta said fuel prices for the September quarter were roughly 30 percent more than a year ago. yet it recorded $1.31 billion in net income, up from $1.16 billion in 2017. Meanwhile, total revenue per available seat mile, an industry metric measuring how much an airline makes for each seat it flies one mile, increased 4.3 percent.

While Delta offset some of its increased costs by adding newer jets that use less fuel, increasing aircraft efficiency and raising fares, executives told analysts premium customers are driving much of the airline’s recent success.

Delta executives said all premium seat revenues, from international business class, called Delta One, to the extra-legrooms cabin on domestic routes, called Comfort Plus, totaled about $3.86 billion in the third quarter, an increase of 19 percent year-over-year.

Ticket sales in the main cabin accounted for about $5.87 billion in the quarter, up about 3 percent year-over-year, Delta reported.

Many customers are buying first class, business class and premium economy at booking, but Delta is also seeing new strength in after-purchase upgrades, often through its mobile app.

The functionality is popular among business travelers who may only expense economy class airfare and perhaps only realize they want an upgrade while they’re on the way to the airport.

But demand is only part of the equation. The airline is getting better at pricing upgrades to maximize revenue, Delta President Glen Hauenstein told analysts. Rather than having a one-size-fits-all upgrade strategy, Delta is being more sophisticated about what it charges.

On a longer domestic flight, such as New York to Los Angeles, Delta might sell an upgrade to its extra legroom section for $100. But on a shorter route with less demand, it might go for $5 to $10. “That’s generating a higher average up-sell rate because we’re able to really tailor the offering to what the market is,” Hauenstein said.

Delta considers a buy-up to be a paid premium class ticket, so not surprisingly, it is recording significantly higher load factors up front than several years ago. As recently as 2011, Delta executives often said it sold only about 14 percent of domestic first class seats.

Now, Hauenstein said, paid load factor in domestic first class is about 60 percent. In international premium economy, which Delta calls Premium Select, paid load factor is 85 percent, though the product is not available on all long-haul aircraft.

Delta’s paid load factor for Comfort Plus is now in the “high 60s” though there is some variance based on flight length, Hauenstein said.

“If your company buys you a coach ticket and you want to sit in Premium Select cabin, we’ll have an offer for you that says, that would be 17,000 miles for you or it’s $170 in cash,” he said. “Those kinds of offers are really where we’re trying to go with all of that and making it simpler to buy or easier to buy and allowing you to buy however you’d like to pay for it.”

While it would seem like Delta would prefer the customer to take the cash upgrade, the airline doesn’t care whether its miles or cash. Travelers often consider them free, but Delta is paid for many of the SkyMiles it generates, often by American Express, which gives them to its customers.

The new revenue, both from cash and miles upgrades, has been so profitable Delta might consider installing more premium seats, executives said.

“There’s nothing keeping us from making more seats in those cabins because they are the higher-margin pieces of our equation,” Hauenstein said.

Recently, though, the number of premium seats has been growing slowly, only up about 3 percent, year-over-year.

Analyst Duane Pfennigwerth of Evercore ISI asked why Delta is now focusing on premium products, rather than its entry-level basic economy fare, which most airlines suggested would produce major profits.

Hauenstein said basic economy is more of a defensive product meant for the most conscious customers, who may seek the cheapest option on an online travel agency. After Delta implemented basic economy to protect is share among frugal passengers, it started to look at other types of travelers, he said.

“That’s when we also started to think about, what did people want to buy from us that we weren’t supplying? And that’s where we devised the superior products and services and brought them to market.”