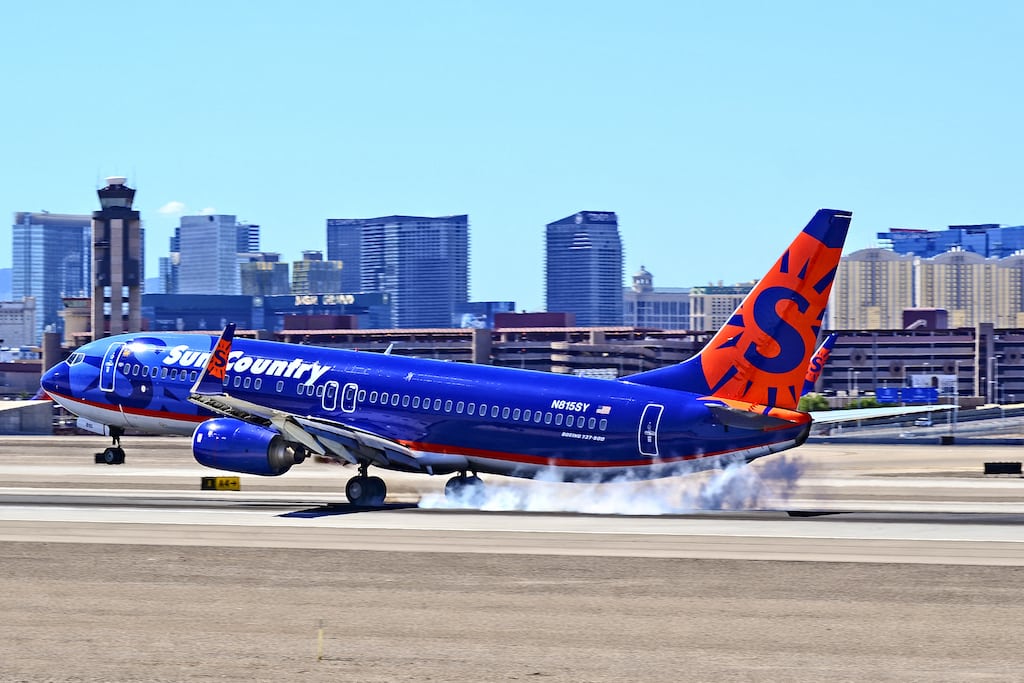 Skift Take
Sun Country wants it both ways. It wants to add fees and reduce legroom for some passengers. But it also wants to keep the brand equity it earned when it was a full-service airline. Can this strategy work?
— Brian Sumers
Share
Tweet
Share
Post
Send

A sleepy U.S. airline with a strong following in Minnesota is getting a makeover as it prepares to expand into more cities.

Minneapolis-based Sun County Airlines announced Wednesday it plans to spend $20 million to retrofit its cabins, adding new economy seats and streaming entertainment passengers can watch on their own devices, while it trims legroom for some customers and removes first class. The project marks the first major customer-facing move for Sun Country since private equity firm Apollo Global Management LLC acquired it early this year. Customers should start seeing changes in 2019.

Sun Country, which by year-end will have 30 Boeing 737s, is not a well-known brand outside of Minneapolis. But that’s changing as newish management, led by former Allegiant Air executive Jude Bricker, who joined in July, 2017, reshapes where it flies. While Minneapolis is still its main hub, Sun Country is expanding to routes like Los Angeles to Honolulu, Seattle to Anchorage and Dallas to Las Vegas. Bricker likes to chase routes where there’s so much demand larger carriers can’t offer enough seats to satisfy it.

Cost control is important, and even before Apollo bought the airline, Sun Country added fees for passengers, including for carry-on bags and seat assignments.  Still, even though they have cut staff, Sun Country executives say they’re not building an ultra-low-cost carrier like Frontier Airlines, Spirit Airlines or Allegiant. Instead, they say they seek to create a discount airline that emulates EasyJet’s slightly upscale European brand.

“They are an airline that does a good job of delivering good value,” Brian Davis, Sun Country’s senior vice president for commercial, said in an interview. “We will have a nice, comfortable experience for everyone.”

It will not be, however, what customers have come to expect.

Despite its size, Sun Country long has operated like a 1990s-style U.S. legacy airline, configuring its Boeing 737-800s with a dozen plush seats in first class and a 150 in coach, all with reasonable legroom. With it new configuration, Sun Country will have 183 seats  — eight more than Southwest Airlines, and six fewer than Ryanair.

Customers will commit to buying a base fare, and then Sun Country will show them a seat map with different seat options and a la carte pricing, Davis said.

“One of the things we are trying to do is avoid using gimmicky words,” he said. “We want to call this what it is, and make it abundantly clear that this choice is about two extra inches.”

Meanwhile, first class is going away.

“There are some customers who love the product,” Davis said. “However, on average more than half those seats go unsold. We feel that’s the customer’s way of telling us it’s not the right product.”

Not Quite a Discount Airline

Sun Country is using the Rockwell Collins Pinnacle seat, a model preferred by many full-service carriers. It’s not the cheapest, lightest or most space-saving seat, but Davis said Sun Country chose it to differentiate itself from discount competition.

And while legroom will be tighter for many customers, Davis said the configuration will be consistent among aircraft, something not true now.

“The seats we have today are for the most part whatever the airplanes came with them when we began leasing them,” he said. “We have something like a dozen different seats flying around, which is difficult to maintain and inefficient. It also provides for not a very good customer experience.”

As it further tries to set itself apart, Sun Country will keep giving free drinks to all passengers. Frontier, Spirit and Allegiant do not.

Sill, as much as Sun Country is trying to position itself as a more customer-friendly option, it’s not clear it can succeed.

In a post, Brett Snyder, who writes the Cranky Flier blog, noted Frontier tried something similar four years ago when it morphed from a lovable Denver-centric airline to a national ultra-low-cost carrier. With the tagline, Low Fares Done Right, it tried to create distance from Spirit and position itself as discount airline with better customer service. But while Frontier is financially successful, most customers no longer love the brand as before.

It’s not clear Sun Country’s loyal Minnesota flyers will stay with it now that it has reduced seat pitch for many passengers, cut perks for frequent flyers, and started charging for carry-on bags.

“Sun Country already has a reputation for good customer service, but it has a model that’s not going to work in the long run,” Snyder wrote just before the company changed strategies “Now it has to figure out how it can transition its model without ruining that solid reputation. A note to Sun Country: It’s probably best not to follow Frontier’s lead. Sure, that airline wanted to do the same thing, but reality hasn’t worked out that way with several very public missteps along the way.”

Sun Country has already had one major mistake. Last month, it stranded roughly 250 travelers in Los Cabos, Mexico and Mazatlan, Mexico, after it canceled their flights because of a snowstorm in Minneapolis. Rather than rescheduling the flights, or rebooking passengers on another airline, Sun Country told passengers it would refund their money but that they would need to find their own way home.

After the incident went viral and a United States senator expressed “serious concern,” Sun Country agreed to reimburse passengers for some of their costs. Davis called it a learning experience.

“We recognize it was a terribly frustrating experience for our customers,” he said.