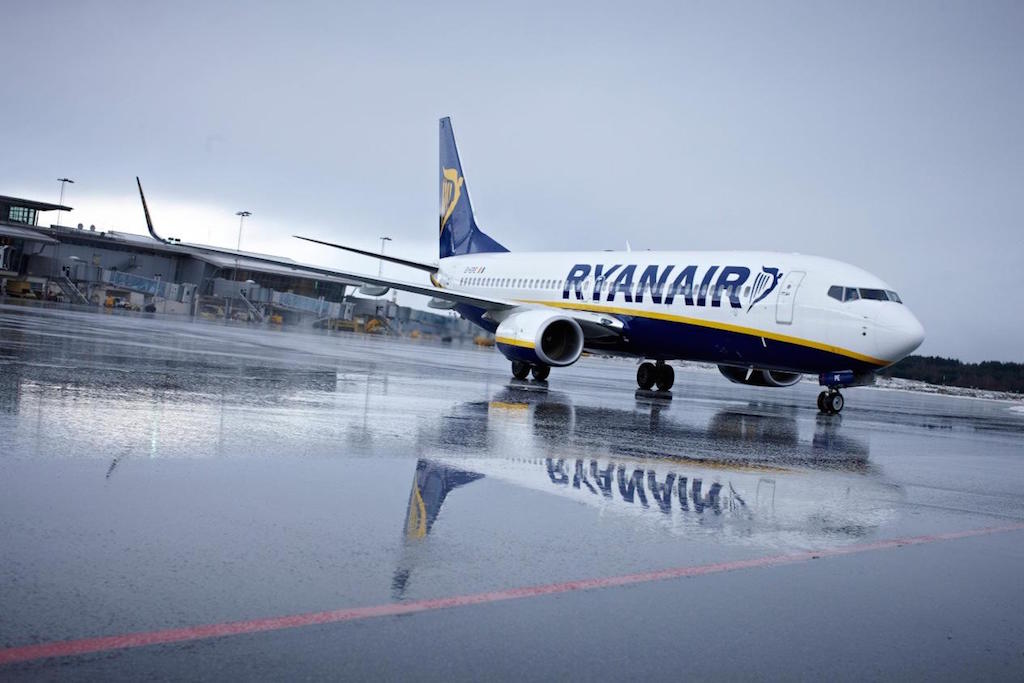 Skift Take
Just before this pilot issue broke, Skift went to Europe to speak with Ryanair’s chief marketing officer about how he improved the airline’s customer service. Recent events will almost certainly set Ryanair back, but we think it can recover — if only because people like cheap fares.
— Brian Sumers
Share
Tweet
Share
Post
Send

On a Friday night earlier this month, Ryanair issued a vague statement telling passengers it would cancel 40 to 50 flights per day for six weeks because it didn’t have enough pilots. It didn’t immediately say which flights would be affected, nor provide advice on what travelers should do.

It was behavior passengers have come to expect from Ryanair, Europe’s leading discounter. Over more than three decades, Ryanair earned a reputation for two things: low fares and disdain for customers. Some wondered if Ryanair management cared about passengers at all.

They had reason to wonder. For years, Ryanair’s CEO, Michael O’Leary, often made outlandish comments. “Are we going to say sorry for our lack of customer service?” he once asked. “Absolutely not.” In interviews, he would ask whether Ryanair should charge for bathrooms, or if the airline might ask passengers to stand, rather than sit.

That was supposed to be the old Ryanair. During the past three years, Ryanair customers didn’t hear that stuff much from O’Leary, who instead focused his ire on governments he believed were thwarting Ryanair’s growth strategy. Meanwhile, Ryanair sought to position itself into an airline people want to fly, albeit one with bare-bones service. Passengers would no longer be treated as the enemy.

This was not about altruism. By 2013, Ryanair had alienated some potentially lucrative passenger segments, including families and business travelers, with many willing to spend a few more euros for a more pleasant experience on another airline. Even EasyJet, another no-frills airline, had a better reputation.

In earlier years, Ryanair didn’t mind passengers flying competitors, but by 2013 the carrier planned to expand to some of Europe’s biggest airports. If it wasn’t nicer, O’Leary and the airline’s board feared, big-city passengers might avoid it.

By most accounts, the strategy has worked. But now, the airline’s reputation has again taken a hit, even though the airline claims pilot-related cancelations affect fewer than 2 percent of customers and will reduce revenues by about only 25 million euros, or $30 million.

“It just confirms everyone’s worst fears,” Neil Wilson, analyst at ETX Capital, said in an interview. “You have that niggle in the back of your mind — they aren’t really there to look after you. And that’s what they are showing. It’s pretty aggressive and doesn’t suggest they are treating their customers well.”

In a conference call with analysts, O’Leary said the airline has enough pilots, blaming the issue on a quirk of their vacation schedule. More pilots than expected must take time off this fall, he said. But many of its pilots argue the airline’s problems go deeper, saying Ryanair has create a toxic culture, and noting many pilots have left for competitors, including Norwegian Air.

If the airline can return its canceled flights to its schedule in six weeks, as planned, Ryanair will probably recover. And since the initial Friday night public relations misstep, Ryanair has been more proactive, contacting affected customers.

But it may take some time before some passengers will give it another chance.

“It will have a reputational impact, for which I sincerely apologize,” O’Leary said. “We fucked up here, and we need to fix it.”

By many accounts, O’Leary, who took over the airline in 1994, was the person who realized Ryanair need to change.

Ryanair was no longer an upstart. O’Leary now runs what is now Europe’s largest airline, and to keep growing — it wanted new flights in established and competitive markets like Frankfurt, Brussels, and Rome — O’Leary realized the company needed to soften its image.

The airline started assigning seats in advance, ending the free-for-all boarding system that made some passengers nervous. It works for Southwest Airlines in the United States, but at Ryanair, boarding “looked like something out of a war movie,” Jacobs said.

It also reduced bag fees, introduced a new website and mobile app, and created a program that provided families with discounts and perks, promising moms and dads they’d find bottle warmers and changing tables on board.

Ryanair even allowed passengers to bring more bags on board for free, but it changed the policy this summer, when it realized too many passengers were bringing luggage, slowing boarding times.

“They were aware they were falling behind EasyJet,” said John Strickland, a UK-based aviation consultant. “They realized they could get a piece of the action.”

“It takes a man to admit you have been wrong and change your mind,” Daniel Roeska, senior research analyst at Sanford Bernstein, told Skift. “Michael got out of Kenny’s way, and let him do a lot of stuff that Michael said previously, ‘We will never do that.'”

In an interview this month in London, Jacobs said he had freedom to make the travel experience better — so long as it didn’t cost the airline too much money.

While the onboard and airport products improved, Jacobs said he spent much of his time fixing the airline’s digital strategy. He joked that when he started, Ryanair’s website looked like it belonged to Hooters, the bar and restaurant with skimpily-clad waitresses. It might take a prospective customer 25 clicks to buy a ticket, and the system didn’t save passport or credit card information for future purchases.

Jacobs said families and business travelers now choose Ryanair because, at least until recently, it’s treating them better. In the past, he said, Ryanair might have assumed its customers would return no matter how shoddy the experience.

“Ryanair did take its customers too much for granted,” he said.” I think families and business travelers would have just said, ‘I’ll fly with someone else.’ We now take our customers much more seriously.”

But not too seriously. The airline’s main goal, he said, remains to transport passengers on time and in a reasonably comfortable manner.

“We listen enough to customers, but you don’t totally listen to customers, because if we did, we’d be introducing lounges and Wi-Fi and ticket prices would go up,” he said.

If passengers get off a flight and say, ‘That was OK,’ it’s enough for Jacobs, who views short-haul travel as a commodity product.

“I don’t want people to say, ‘I love Ryanair,” he said. “I don’t think anyone flying a short-haul airline in Europe would say, ‘I love the airline.’ If you’re flying London to Barcelona with Ryanair, and the plane lands in Barcelona, you might say, ‘I love Barcelona and the airline got me there on time at the lowest possible price.'”

Ryanair sought to soften its image as the airline altered its strategy to focus on larger markets and bigger airports.

Once content to fly only to secondary airports, or airports far from the major cities they purport to serve —Stockholm Skavsta Airport is about 50 miles from downtown — Ryanair is expanding at much bigger facilities.

“They needed to go where the people are,”  Roeska said.

Ryanair is now growing at the main airport in Frankfurt, and it’s already flying to most larger European airports with only two major exceptions — London Heathrow and Paris-Charles de Gaulle.

Fares tend to be higher at larger airports, even for low-cost airlines, who may undercut legacy airlines and still make money. Big-city passengers often spend more on ancillary items, Roeska said, because they’re more likely to pay for better seats or priority boarding.

In markets like Germany, Ryanair doesn’t have to match Lufthansa’s full-service approach, but it probably had to improve to make its product bearable for more travelers, Roeska said. For the 30 years prior, Ryanair rarely flew exactly the same route as another airline.

“What they definitely did was broaden their mass-market appeal to make it compatible with a wider audience throughout Europe,” he said. “It’s becoming a real airline and less of the gung-ho low-cost carrier it used to be.”
Ryanair is considering growing further. It has said it wants to buy part of the bankrupt Italian carrier Alitalia, though it’s not clear how serious Ryanair’s bid will be. And while the airline has said it no longer wants to buy Air Berlin’s assets, it wants to continue to grow in Germany, if Air Berlin’s slots at major airports become available.
At times, O’Leary has wondered whether Ryanair should fly to the United States. That’s not expected any time soon — O’Leary has stopped talking about it — but by refining its customer service, Ryanair someday could be competitive on shorter transatlantic routes.

Not only did it miscalculate how many pilots it would need for its fall schedule, but it also botched how it handled the cancellations. Initially, the airline could not tell passengers which flight would be canceled, creating confusion among passengers and potential customers. It continued selling seats on flights it knew it might not operate.

Ryanair has said it will try to transfer passengers to other flights, but O’Leary has refused to pay other airlines to carry them. If Ryanair can’t fly the travelers, O’Leary said the airline will follow the law and refund customers. Some passengers may receive cash compensation under EU laws, but the airline can avoid paying most penalties if it cancels flights early enough.

But almost every major European airline stumbles occasionally. Most recently, it has been British Airways, with multiple computer outages and its ongoing labor dispute with many of its newer flight attendants. Both Lufthansa and Air France also face occasional labor issues with some employee groups, forcing them to cancel flights.

Customers tend to return to airlines after most screw-ups. They even came back to United Airlines earlier this year after security officials in Chicago violently dragged one of the carrier’s customers off a plane. United has said it expects no lasting financial damage.

At Ryanair, most customers should return, if only because it’s often cheaper than the competition.

“It’s reputational damage, but it’s not fundamentally hurtful to the company,” said Wilson, the ETX Capital analyst. “People kind of expect this from Ryanair. It just sets itself back because it’s trying to position itself as a customer-friendly airline.”

Subscribe Now
Tags: Low Cost Airlines, Michael O'Leary, ryanair
Photo Credit: Ryanair, which flies only Boeing 737s, is seeing its reputation stumble after it said it would have to cancel thousands of flights over six weeks. Ryanair