Team Skift was out most of this week in Montreal participating in some bleisure activities — OK, mostly leisure — for the company’s annual retreat. But that didn’t keep news from breaking (frequently).

Monday brought a decision from the U.S. Supreme Court to hear arguments on the executive order by President Donald Trump banning travel from six Muslim-majority countries. The court will take up the issue in October, but in the meantime, part of the ban will go into effect. Travelers with “bona fide” connections to the U.S. — close family, business, or academic — should not be blocked from getting visas under the current decision.

So what does that mean for business travel? We expect less chaos at the airports, but confusion remains.

Greeley Koch, executive director of the Association of Corporate Travel Executives, offered this reaction in a statement: “There are reasons to be heartened by the Supreme Court’s decision [Monday], in particular the provision that would allow travelers with legitimate ties to the U.S. to continue to enter the country. But the key to successful implementation—and to minimize the impact to businesses—is clearly defining the ‘significant business or professional obligations’ that will allow travelers with proper documentation to enter the U.S. and keep the economic engine running. We will be eagerly awaiting clarity until this issue can be definitively resolved.”

On that other ban front, the threat of an in-cabin “laptop ban” appears to be giving way to a policy of increased security around the world for all U.S.-bound flights. Again, specifics are scarce. In another statement, Koch called the new procedures “far preferable to an outright electronic device ban” for business travelers, but cautioned that the details are important.

“How onerous will these new protocols be for travelers and airlines?” he asked. “What if an airport or airline has difficulty complying—does that lead to a ban on electronics in the cabin? Until we have the details, this policy has the potential to become a de facto device ban.”

Uncertainty around security restrictions can affect traveler satisfaction, as can a multitude of other factors. It seems like a given that travel managers should know how satisfied (or not) road warriors are. A new study, however, shows that 31 percent of North American travel managers who responded to a survey never measure traveler satisfaction.

Given the state of the world and the rapidly evolving forces that impact corporate travel,  we think that’s a conversation worth having. 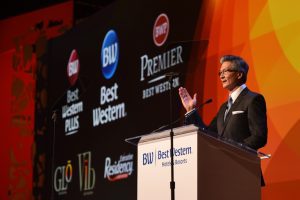 Hotel CEOs Love Direct Booking But They Have Varied Views About Strategy: Whether you choose to view it as a war or not, it’s fairly unanimous that nearly every hotelier wishes he or she would have more direct bookings versus bookings made through an online travel agency. Read more at Skift

Amtrak’s New CEO Is Delta Air Lines’ Old CEO: Before Richard Anderson took over Delta, the airline was a mess. Now, it’s considered by many as the best-run airline in the United States. We’d love to think Anderson can do something similar here, but fixing Amtrak will be a much more challenging task. Read more at Skift

Are Travel Managers Missing Out When They Don’t Solicit Business Traveler Feedback?: Many travel managers do not solicit feedback from their travelers, which seems like a missed opportunity. The evidence, however, shows that reacting to traveler feedback doesn’t necessarily lead to more satisfied travelers. Read more at Skift

Trump Travel Ban Partially Upheld by Supreme Court in Temporary Ruling:
The stage has been set for a showdown in October that will have serious ramifications for the U.S. travel industry. Read more at Skift

Supreme Court Travel Ban Ruling Not Expected to Create Airport Chaos: While the U.S. Supreme Court-allowed version of the travel ban is more limited than earlier versions and unlikely to create mass chaos, the travel industry will still have to deal with the fallout of the Trump administration sending a non-welcoming message about international travel. Read more at Skift

Airline Laptop Ban Will Be Relaxed if Additional Security Measures Are Achieved: Despite the big talk about enhanced screening, this is a retreat by the U.S. and a win for airlines that pushed a more strategic approach to security. Read more at Skift

Etihad To Let Passengers Bid for Adjacent Seats Among Series of Revenue Moves: Etihad may be able to squeeze some extra revenue by giving passengers the option of stretching out a bit more in the seats next to them but selling the seats would be a lot better. Read more at Skift

Google Picks Avis to Run Its Self-Driving Car Fleet Pilot Program: Using car rentals to get consumers familiar with the technology is a smart move. Smart enough that Apple had the same idea at the same time. Read more at Skift

Apple Partners With Hertz for Self-Driving Car Trials: This is clearly an idea with legs, given all the news in one week alone. We just want to know how long it will take for public sentiment — and corporate travel policy — to embrace the option once the technology is ready. Read more at Skift