Cities across the U.S. are aggressively promoting their civic policies around diversity and inclusion in an attempt to ensure that all meeting attendees feel welcome in their communities. This rise of advocacy at the local level is a direct response to the inane alt-right narrative coming out of the White House.

A couple weeks ago, I wrote about Washington D.C.’s new “Inclusive Innovation” positioning that emphasizes the city’s spirit of diversity and its proactive outreach to meeting planners with multicultural groups — which means most groups.

D.C.’s initiative is a direct response to the rise of alt-right nationalism in the White House, which the city’s mayor, convention bureau, and economic development agencies are aggressively trying to distance themselves from.

This week, we have an inspiring lead story highlighting how diversity and inclusion are top-of-mind for many convention bureaus and their community partners across the country. This is one of my favorite stories ever published at Skift so I encourage you to read it, because it’s definitely delivering on our mission to define the future of travel.

“One of the things we do is work with local community members who are connected to a variety of diverse audiences,” said Kitty Ratcliffe, president and CEO of Explore St. Louis. “We work with the St. Louis Mosaic Project, which is representative of many different cultures within the community, to help us identify convention groups. Many of those are fraternal groups or professional groups of a particular ethnic background or culture.”

“Music of all genres is at the heart of Nashville,” she said. “It is critical that we attract groups that reflect, and nurture, the diversity of Music City, and that by doing so, foster the economic development of businesses owned by those in the ethnic, multicultural and LGBTQ communities.” Read the full story here.

“Check out @simonsinek on iPhone addiction with millennials, highlighting the importance of face to face connection: twitter.com/causrapp/status…” 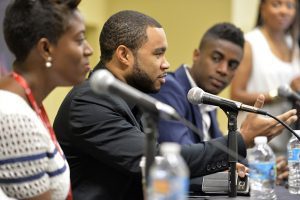 Multicultural Meetings and Events Will Be Key as Minorities Become the Majority: Convention bureaus across the U.S. are promoting their cities’ diversity and inclusivity to meeting groups in an effort to separate themselves from the rise of alt-right nationalism. This is also helping build stronger networks and relationships among all ethnic groups within their communities, which helps deliver a more valuable event experience for all attendees. Read more at Skift

Meetings and Events Are a Big Part of Las Vegas’ Latest Winning Streak: With gambling revenue in steady decline in Las Vegas, the meetings and events industry has become extremely important for the city’s resorts and overall economic resurgence. Read more at Skift

The Meeting Hotel of the Future: “Hotels used to be where the world came to see new experiences, and that is no longer the case at all. It’s completely reversed,” says Dr. Lalia Rach, a longtime educator in the hospitality industry. “You bring the expectation that you’re going to be able to do in your hotel room all that you do at home. With all of your technology.” Read more at Successful Meetings

Top 8 Things I Learned at TED 2017: Bill Gross, founder and CEO of Idealab, thinks robotics and artificial intelligence are going to make the biggest impacts on society in the next decade. His other takeaways from sessions at Ted 2017 include the value of personal and professional coaching, face-to-face engagement, giving back, embracing opposing opinions, and the importance of betting against the consensus — and being right. Read more from Bill Gross

The Themes That Echoed Through TED2017: Here’s TED’s version of the big themes this year, including the need to stop separating “Us” from “Them,” and how we’re all becoming addicted to technology. Podcaster Manoush Zomorodi said: “The only people who refer to their customers as ‘users’ are drug dealers and technologists.” Read more at TED

How Coachella Could Help You Plan Better Events: With almost 200,000 people attending the two-day Coachella festival in Palm Springs, the event has grown because it focuses on the destination experience and innovative digital engagement strategy as much as the programming. Read more at Associations Now

Why are Chatbots and AI Big Event Tech Trends for 2017? According to Kristi Colleran, co-founder of Sciensio, which is partnering with IMEX Frankfurt this year, messaging apps such as WhatsApp, Facebook Messenger, WeChat, and Kik have far surpassed the major social networks in terms of the number of active users per month. Messaging apps have become the new second home screen. Read more at Sciensio

Presenting Boston TechJam 2017: It’s Literally a Block Party for Innovation: Five years ago, Boston TechJam started in a garage. This summer, it’s being billed as a “platform for organizations to collaborate with 7,000+ tech enthusiasts.” New for 2017, there’s going to be a content hub showcasing tech trends and an ongoing campaign to show why diversity is good for business. Read more at BostInno

How Jacuzzi Mixes Business With Bubbles at Its International Dealer Conference: The hot tub maker’s annual dealer conference has always been well attended, but three years ago, company CEO Robert Rowan decided the event needed to show a stronger business ROI. Here’s how he did it by breaking down silos, reworking event design, and improving educational content. Read more at Convene