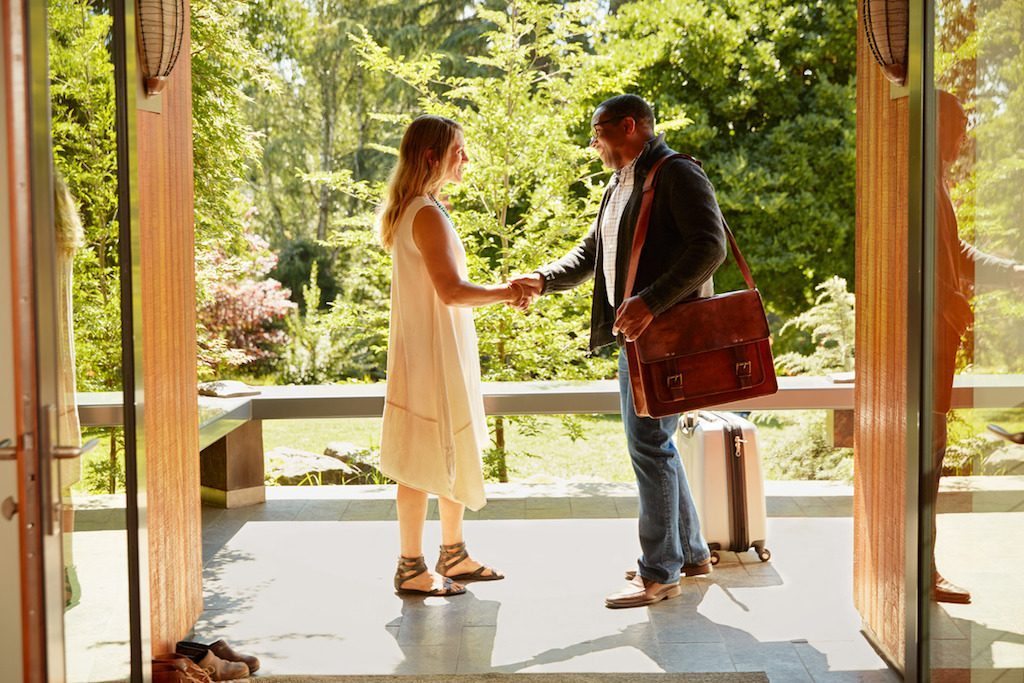 Whatever can be done to prevent discrimination and bias on the Airbnb platform is a good thing. Let's just hope this plan works toward that goal.

Nearly a year after a California government agency filed a complaint alleging that Airbnb failed to prevent discrimination against African-American guests using its short-term rental platform, the company is making an attempt to work with government regulators to police and improve upon its non-discrimination policy.

On April 27, Airbnb and the California Department of Fair Employment and Housing (DFEH) announced that both parties had signed an agreement on April 19 whereby Airbnb would, for at least the next two years, voluntarily agree to take specific actions that address racial bias and discrimination on its platform.

These actions include, but are not limited to, regularly scheduled reports to be submitted to the DFEH about the company’s ability to curb discrimination, as well as fair housing testing by the DFEH on Airbnb hosts with three or more listings in California who have been the subject of one or more discrimination complaints.

“We will continue to work collaboratively with Airbnb to prevent racial discrimination by its hosts,” said DFEH Director Kevin Kish in a press statement. “California is committed to removing all discriminatory barriers in housing, including in new platforms and marketplaces. Fair housing testing is an important and powerful tool in enforcing fair housing laws.”

In a statement published on Airbnb’s blog, Airbnb General Counsel Rob Chesnut said, “Fighting discrimination is fundamental to our mission and we are committed to creating a community that is open to everyone. Our work with the State of California builds on our ongoing efforts to fight bias and we look forward to continuing to work with state leaders to ensure the Airbnb community is fair for everyone.”

Airbnb has long battled allegations that the design of its short-term rental platform does little to prevent bias or discrimination, either on the part of its hosts or its guests. Those complaints, which stretch as far back as 2015, came to boiling point last year when the hashtag #AirbnbWhileBlack brought international media attention to the problem and a class-action lawsuit followed.

In response, Airbnb launched a review of its policies, led by civil rights leader and longtime American Civil Liberties Union (ACLU) executive Laura W. Murphy and former U.S. Attorney General Eric J. Holder. That review, in turn, resulted in a revised nondiscrimination policy that was announced on Sept. 8, 2016 and further clarified on Nov. 1 with new updated terms of service for all users.

The Bigger Question: Was This Agreement Absolutely Necessary?

While Airbnb has made concerted efforts to show it is actively fighting discrimination and bias on its platform — including achieving its goal of having at least 1 million of its more than 3 million listings instantly bookable by January 2017 — a bigger question lingers.

Namely, why did the DFEH feel it was necessary to accept this agreement from Airbnb? And vice versa: Why did Airbnb agree to it?

In a release issued by the DFEH, it noted the agreement was reached after “more than ten months of investigation and collaborative work between DFEH and the company.” DFEH Director Kevin Kish originally filed complaints against Airbnb on June 7, 2016, alleging that the company “may have engaged in acts of discrimination in violation of Government Code, section 12955 and the Unruh Act, Civil Code, section 51,” according to court documents relating to the agreement (attached below).

However, as noted in the court documents, Airbnb maintains it is exempt from any liability under the FEHA and Unruh Act because of its favorite federal law: Section 230 of the Communications Decency Act (CDA). The CDA is a federal law that basically says websites can’t be held responsible for the actions of the people who use those sites.

Airbnb’s CDA argument is noted in the court documents, but the DFEH does not explicitly say that this CDA argument is valid. However, the agreement does note that the DFEH will not file any discrimination-related complaints against Airbnb for at least two years.

Ben Edelman, the Harvard researcher whose work is cited as evidence for Airbnb’s violations of the FEHA and Unruh Acts in the same court documents, said he’s baffled by the DFEH’s decision to accept this agreement by Airbnb.

“The fact that they have to settle to get the right to ‘test’ Airbnb is incredibly ironic,” Edelman said. “Imagine if a police officer needed a settlement from me to check if he can use his radar gun to check my speeding. That’s basically what’s happened here. To test Airbnb for discrimination, they [DFEH] have to promise not to sue Airbnb for 18 months. Regulators shouldn’t have to ask permission to examine a product or service that they’re regulating. The settlement wasn’t totally clear as to why the DFEH felt it needed to ask permission. Did the DFEH feel constrained by Airbnb’s terms of service that don’t allow fake accounts and testing?”

Edelman said that in the course of his research into discrimination and bias on the Airbnb platform that Airbnb “blocked” him from creating fake accounts to do testing.

“If the state of California needs its help in order to test Airbnb’s service I think that portends badly for independent oversight of tech companies,” Edelman added. “It makes it harder to get regulators informed about what’s going on and what work needs to be done. It seems, to me, quite alarming. I didn’t like that as a bargaining chip. That, to me, is table stakes. If you want your service to be technically legal in the state of California, the regulator needs to be able to protect it.”

On the other hand, Eric Goldman, a professor at Santa Clara University School of Law and an expert on legal issues relating to websites, said it was prudent for the DFEH to be able to “test” the platform in this manner.

“Does the government need an agreement to gather that information to assess discriminatory behavior on the Airbnb site? The short answer is, ‘Yes.’ If the government wants to do that they have to create fictional listings and engage in fictional activity. That’s against Airbnb’s rules and that would create a lot of chaos in their system.”

Goldman also thinks that, in comparison to many other tech companies, Airbnb is investing much more into fighting discrimination than most.

“Airbnb has gone way above industry standard behavior for paying attention to discriminatory issues,” he said. “We don’t see Internet companies investing these kinds of resources that Airbnb is investing here. Whether you call it ‘voluntary’ or ‘coerced,’ the fact that Airbnb is doing this without being legally required to do so shows that they took this issue seriously.”

Goldman added that while he’s not familiar with legal procedures related to this particular government agency, he thinks the complaints would have led to some sort of litigation had Airbnb and the DFEH had not come to an agreement.

“If this had gone to court, Airbnb would have invoked Section 230 [of the CDA] and other defenses,” he explained. “The court may have said the department completely overreached. Both parties had some uncertainty over what would happen. So, they came up with an agreement that was helpful to both sides.”

A Closer Look at the Agreement

Within the agreement itself, there are references to a few different actions Airbnb may (or in some cases, may not) take in an effort to prevent discrimination and bias, many of which were originally cited in Murphy’s September report.

This includes making the revised non-discrimination agreement more prominent and visible on Airbnb’s website and mobile, and if Airbnb makes any changes to the policy it has to notify DFEH. Airbnb will also explore “the availability of alternatives to the current use of guest photos and names.” The displaying of people’s names and photos is something Edelman and other critics have pointed out as one of the biggest deterrents to establishing a discrimination- and bias-free platform. Airbnb will also focus on increasing the number of listings it has that are instantly bookable, and regularly inform the DFEH about its actions.

Interestingly, the agreement with the DFEH also says “Airbnb shall consider developing a feature” that would hold hosts who reject a request on “claimed unavailability.” In Murphy’s report, however, Airbnb said that it would develop a feature that would address this very issue within the first half of 2017. So, if a guest is informed by a host that his requested dates are unavailable — even though the dates were advertised as being vacant — Airbnb would automatically block out those dates for any other requests that come up for those same dates, ensuring the host cannot make the listing available to other guests of a different race, etc. Judging from the DFEH agreement, it’s unclear whether that feature is set to be completed or implemented anytime soon.

Another interesting product feature mentioned in the agreement is the addition of a “gallery” in the host’s profile that would collect information on all the guests who were rejected by a host. This gallery would only be seen by the host and, internally, Airbnb, “for the purpose of identifying, monitoring, and preventing discrimination.” Airbnb is expected to make a decision about this new feature within the next three months and if it ultimately decides not to proceed with the “gallery feature,” it will have to inform the DFEH as to why.

Edelman, for one, doesn’t think the gallery tool will be an effective way to combat discrimination or bias, however. “The gallery feature embodies Airbnb’s vision of hosts being responsible for making these decisions,” he explained. “Airbnb would have California look at an individual host and an individual host’s decision about whom to accept and whom to reject. That’s all well and good but that puts aside the fact that Airbnb designs the platform in the first place. Why are the pics even there? Why are names even included in a reservation request? The gallery puts the focus away from those fundamental questions and it’s a very narrow view of the individual actions of an individual host.”

Additionally, Airbnb has agreed to offer anti-discrimination and bias-awareness training to all of its California-based employees, including customer support employees, and it will also make available unconscious bias training for hosts with listings in California. Airbnb’s Tax & Legal department will provide a report at least every six months to the General Counsel of Airbnb and DFEH, and the DFEH has right to review and copy non-privileged records upon request. The company also said it has a full-time product team devoted to advancing “belonging and inclusion and to root out bias.”

If Airbnb doesn’t show “statistically significant and operationally meaningful improvement in the relative acceptance rate” for “Caucasian, African American, Hispanic, and Asian American guests” within 18 months of the agreement going into effect, the terms of the voluntary agreement will be extended for one more year, and Airbnb will have to come up with a new plan for increasing the relative acceptance rate.

Photo credit: Airbnb and the California Department of Fair Employment and Housing have signed a voluntary agreement to work toward curb racial discrimination on the Airbnb platform. Airbnb / Airbnb