Skyscanner Enlists Finnair for Most Robust Airline Instant Booking Yet As we've noted before, a lot of industry professionals argue that metasearch and online travel agencies will converge. Skyscanner's new way of selling Finnair's fare families may be a sign of trends to come.

Finnair is testing a booking technology that lets travelers use price-comparison company Skyscanner to buy flights and additional services while remaining on the Skyscanner website.

Some users in Germany see the tests, though it’s not consistently available yet. Most other users worldwide of Skyscanner (recently acquired by China’s Ctrip) will start seeing the option “shortly,” the companies say.

The move is significant for the online travel industry. Most airlines now sell more than mere seats. They sell bundled products, such as a basic economy ticket that doesn’t include a seat assignment or the right to stow bags in the overhead bin. But travel companies struggle to display these in an apples-to-apples way with tickets that come with lots of perks.

Skyscanner is standing out for being the first to display an airline’s so-called fare families in a way that is both instantly bookable and easy to compare with other choices.

Skift tested the service by doing a search in Germany. Skyscanner’s instant booking option was one of many listed to book flights on a particular day. The direct booking option wasn’t the cheapest. But it stood out because its “button” was red, unlike the other options which were green.

The big news is that Finnair’s fare families are displayed. By clicking the red button, we were offered Finnair’s full fare families within economy class: “Light” (a ticket type that debuted in 2015 and is aimed at passengers traveling with carry-on baggage only), a higher-priced “Value” (which lets a traveler carry a piece of baggage with the maximum weight of 23 kilograms or 50 pounds), and an even more expensive “Pro” (a ticket type that includes not just lots of luggage but express check-in, extra frequent flyer miles, and other perks).

The ability to buy “additional services” while remaining on Skyscanner’s site is also notable. In Skyscanner’s previous instant booking experiments with two airlines — namely British Airways (since summer 2015) and Singaporean budget carrier Scoot (since January 2017) — only tickets for seats were sold and only additional information about flights, such as cabin choice and aircraft type, were displayed.

What’s different this time is that Finnair is distributing its products via a new messaging standard that has been developed and championed by the largest airline lobbying group, the International Air Transport Association (IATA). Several of the world’s largest airlines have used IATA to push the industry’s travel technology middlemen to develop more up-to-date methods of distributing their fares and other products, like seat upgrades, seat assignments, and fare family products that bundle several services together for a price. 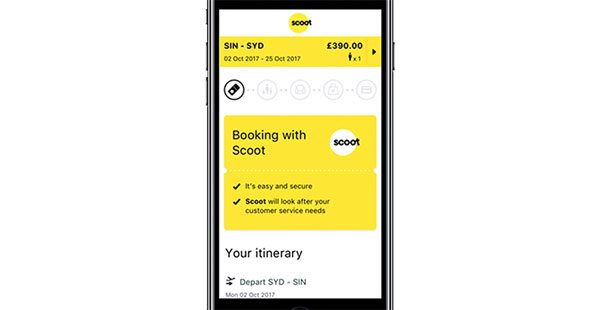 As context, for readers who haven’t followed the industry saga thus far: Airlines track their inventory in computerized passenger service systems. Middlemen software use legacy links to these systems to pull data to online and traditional travel agencies and metasearch companies. The data for complex airfare products are, broadly speaking, not included in these feeds. Airlines have to create a set of APIs (application programming interface, or a method used for retrieving data) to be able to connect to Skyscanner and other travel companies. Only a handful of airlines, such as British Airways, Scoot, Finnair, and United, have created these APIs.

Amadeus is one of the travel technology companies that, after first resisting the effort, has begun to offer tools that let airlines distribute their content in this way. Skyscanner is the first consumer travel marketplace to use Amadeus’s Altéa New Distribution Capability tool, which offers an API that uses the IATA-developed standards and which Amadeus launched in early 2016. (Amadeus’s rivals Travelport and Sabre also have NDC-based offerings of various kinds.)

Finnair says it is interested in distributing its fare families and other products in a similar way to other travel websites. It serves more than 85 destinations in Asia, Europe, and North America, carrying more than 10 million passengers a year and is feeling a marketing crunch between the traditional network carriers and the low-cost carriers in Europe and Asia.

Meanwhile: Scoot is still not selling ancillaries through Skyscanner, but the technological capability is built-in to Skyscanner’s offering, and the plan is to add that functionality soon. Skyscanner’s direct booking tool is partly powered by its integration with technology from payments provider Braintree.

As of February 2017, Skyscanner has already seen its instant booking product generate upwards of 20 percent uplift on flight booking conversion and “an approximately 100 percent uplift” on ancillary purchases. Additionally, they saw mobile conversions soar up to 50 percent. Braintree’s technology means that “repeat consumers who can enjoy a quick checkout experience, as they are not required to enter their payment information every time that they look to book a ticket.”

Flight metasearch sites have been slow to add instant booking, but Skyscanner chief executive Gareth Williams said in a recent interview that will change. “We have a strong pipeline of carriers coming up shortly, with a view to scaling coverage rapidly from here on in.”

As Skift has noted, a lot of people argue that metasearch and online travel agencies will converge. One of those is Eric Lawson-Smith, partner at the communications, media and technology-focused M&A advisory firm Arma Partners. He says, “Meta wants to be the single point of access and reference for customers the way OTAs traditionally have. Assisted booking shifts value in the value chain from the OTAs to metas the more it becomes a reality.”

On an earnings call on February 27, Priceline Group’s CEO Glenn Fogel said that it’s clear that consumer increasingly like to use comparison-shopping sites like Kayak and that it can become a much bigger business for his conglomerate. Kayak is rumored to be developing a new design interface that will make price comparison (including instant booking) more intuitive for consumers to use. Skyscanner might note that Google Trends data indicates that Skyscanner has received more interest by searchers over time.

Photo credit: A look at an instant, direct booking for Finnair while remaining on the Skyscanner interface. The option to see fare families and to be upsold on services is a first for travel price-comparison websites. Skift