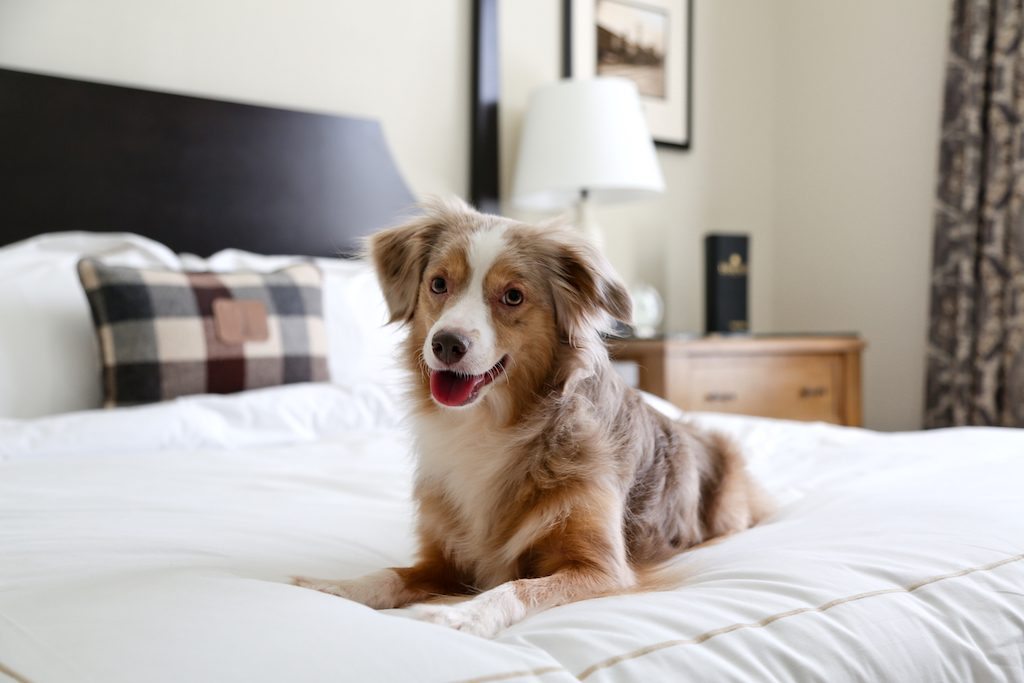 The complexity of traveling with pets is often a major headache for their owners. Many brands are looking to ease pain points, but a lot of work still needs to be done, especially by airlines.

If you’ve noticed dogs lounging in the lobby of your hotel, or sitting quietly on the ground in front of your seatmate on a flight, you’re not alone.

While the exact size of the pet travel market is unknown, the proliferation of pet-friendly hotels and more accommodating airline policies shows the power of this group of consumers.

Between 37 and 47 percent of Americans own a dog, according to the American Pet Product Association, and between 30 and 37 percent own a cat.

A recent survey of more than 1,100 travelers conducted by TripAdvisor found that 53 percent of respondents travel with their pets, and 52 percent will only stay at pet-friendly properties.

The report also found that 35 percent of pet owners take shorter vacations than they otherwise would, and that 25 percent take fewer vacations overall because of their pets.

And 20 percent of those with pets have smuggled them into a hotel room.

Why? Traveling with a pet remains a hassle, despite moving closer to the mainstream in recent years. Increased demand from consumers is complicated by the increasing complexity of navigating rules and regulations for air travel, according to experts.

“Sometimes, even with the best of planning it still doesn’t go as planned; there are weather issues or flight cancellations, or other unknown factors,” said Jeni Redmond, board member of the International Pet and Animal Transportation Association and operator Petsfly.com, which provides pet travel services. “A lot of it is in the communication of what people hear compared what people say. Even with any amount of education they give you, you still might not understand.”

Redmond has been assisting travelers with the minutiae of transporting their pets for more than 20 years, and has seen airlines up their game with respect to services for pets while traveling and tools to better educate consumers about the regulations surrounding their pets. The majority of her customers are people relocating across the country, and those who regularly move from home to home.

There are two main areas of confusion facing air travelers looking to bring their pet along or transport their pet solo. First, each airline has different pricing scales and regulations with respect to exactly how pets can travel. Second, individual countries and states have regulations that vary wildly with respect to inoculations like rabies distemper and required quarantine periods.

“Typically most airlines require them to be under 20 pounds and to be small enough to fit under the seat in front of you,” said Redmond. “Each country makes their own regulations and it depends on what they’re trying to protect for the good of their country… each airline has their own regulations when it comes to pets. Some will only take them in cabin, in cargo, or wont take them at all. Knowing who will or won’t take pets, and accept them in what capacity, is also important. That’s where people get hung up.”

Confusion in the skies

Certain airlines allow certain types of dogs to be transported in specific carriers, for instance. She mentioned one case of a United Airlines customer buying a wire mesh carrier for their pitbull, after looking at the airline’s restrictions, and being turned away because United requires a metal kennel. Even after trying to follow the rules, the traveler’s pet was refused.

A look at airline pet policies reveals little consensus among U.S. carriers. United, Delta Airlines, and American Airlines each charge $125 each way to bring a pet in the cabin if the combined weight of the carrier and pet is no more than 20 pounds. Each airline also has specific cargo shipping programs for pets, charging more the heavier the pet and kennel are.

The good news for pet owners is that airlines have created stronger policies regarding the treatment of animals while in transit.

“Twenty years ago, there were no airport facilities for pets,” said Redmond. ” Now, many major airports in cities like Chicago, Houston, and New York have pet facilities on site so if the pet does have a long layover it’s basically a boarding facility to let them walk around, feed, and stretch. It’s kind of like an airport lounge.”

Hotels, similarly, have helped develop a wider range of options for travelers with pets.

“People are certainly traveling more with their pets today,” said Adrian Kurre, global head of Homewood Suites and Home2 Suites by Hilton. “The hotel industry has responded by not just being pet-friendly, but pet-welcoming. Travelers want a stay that accommodates their needs and makes it hassle-free.”

As extended stay hotels have spread across the U.S., the need to accommodate guests with pets has also expanded. Most brands charge a fee for boarding a pet, but will also provide a small range services like including pet beds and feeding bowls.

Home2Suites by Hilton, for instance, charges a fee at its properties to accommodate pets and allows no more than two per room. Individual hotels partner with pet stores and other pet services in their area to partner up guests with whatever they need.

“It’s important to look at the reason people are traveling,” said Kurre. “Extended stay properties are a natural fit since our guests are away from home for longer periods and don’t want to leave their pets with someone else or incur the cost of boarding.”

One of the first hotel brands to allow pets was Kimpton Hotels, which made inclusivity for pets a core part of its boutique brand due to the proclivities of its founders.

“It seems to be more popular today than when we started the company,” said Nick Gregory, senior vice president of hotel operations for Kimpton Hotels & Restaurants. “We really don’t throw a ton [of marketing] out there, it’s more about word of mouth that really gets the pet friendly out. More than 50 percent of pet owners are traveling with their pets and you can also note the significant amount of associated businesses that are tied to pet products.”

Kimpton doesn’t charge a fee for pets, but does require an additional waiver. Its hotels also provide amenities for free like dog beds and treats. Individual properties are encouraged to develop their own programming around pets, and many partner with local animal groups to encourage adoption events for guests.

“Other brands charge you a fee, other brands have very restrictive size and number of animals,” said Gregory. “We view it differently with a much more casual approach which, it turns out, doesn’t hurt anybody. It comes at no expense and you’re actually going to get some free stuff. We don’t have a size restriction or number restriction, we have a few things that obviously have to be appropriately managed. You fill out a pet agreement that you’re responsible for your pet. If something happens and a chew toy that wasn’t meant to be a chew toy becomes one, you’re going to take care of it.”

Photo credit: More than half of pet owners travel with their pets, according to a TripAdvisor survey. An extremely good boy sits on a bed in a guestroom at the Kimpton Taconic Hotel. Y Nakanishi / Flickr