Blurring the Line Between Conferences and Festivals — Meetings Innovation Report Skift Take
The conference of the future integrates entertainment, inspiration, and immersive experiences into the event, as much as education, to engage the multidisciplinary mindset of creative professionals today.
— Greg Oates
Share
Tweet
Share
Post
Send

The inaugural Murmuration Festival kicks off next week in St. Louis, billed as: “The Convergence of Art, Music, Science and Tech.” That sounds familiar; where have we heard that before?

Events such as South by Southwest (SXSW) in Austin, Bonnaroo in Tennessee, and Tech Open Air in Berlin have been delivering mashups of interdisciplinary programming for years, marrying art, tech, science, business, and other themes that were once previously considered non-aligned.

Now, those conferences and festivals are spawning a slew of events like Murmation to attract a new generation of attendees craving educational and entertaining experiences across the country.

At Skift Global Forum in two weeks, I’ll be sitting down with Mike Shea, executive director of SXSW, and Richard Goodstone, co-founder of Superfly, which produces Bonnaroo. They’ll be talking about how their events’ success is based on understanding what motivates and excites the creative personality and multidisciplinary mind today. Here’s our preview of that session.

“Check out the best photos and videos shot at the #arselectronica16 Festival! aec.at/feature/en/festival” 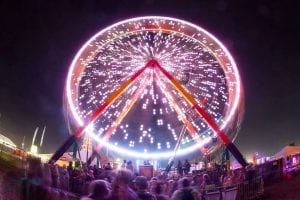 How Bonnaroo and SXSW Have Reinvented Live Events: The future of conferences and live events places a priority on bringing together thought leaders and influencers from more diverse segments, because creative audiences today want a more interdisciplinary breadth of tech, arts, and educational experiences. Read more at Skift

The Art Of Event Planning: Behind The Scenes Of Successful Events: In the startup scene, conferences and meet-ups provide a platform for entrepreneurs to learn about new technologies and connect offline. Here are three event strategists discussing what happens behind the scenes of their successful tech events. Read more at Factory Berlin

Inside TED’s Unconventional App Strategy: TED’s event app is different than many others. There’s no integration of social media, no sponsor logos, and no upfront information about an attendee’s title and company name. Here’s why. Read more at BizBash

Jay Samit: Become a Lifelong Learner: CEO consultant Jay Samit will be speaking about disruption at the upcoming IMEX America events industry trade show in Las Vegas in October. “Truthfully, the meeting and event industry is ripe for disruption,” he says. “Most aspects of conferences have changed little in the past century and yet there is so much room for improvement.” Read more at MPI

Amex Turns the US Open Into a Marketing Opportunity: The American Express Pro Walk fan experience was an augmented reality installation that showed tennis fans what it’s like to walk out from the locker room onto the court, as well as be virtually greeted by tennis legends Pete Sampras and Monica Seles. Read more at CNBC

US Open’s Official Mobile App Is IBM-Powered And AI-Enhanced: The app makes use of IBM’s Watson AI technology to create a cognitive concierge that can understand natural language such as, “Where can I park?” It can also generate subtitles and transcripts for video clips posted by the US Open throughout the day. Read more at Mobile Marketer

After Live Event Cancels, Speakers Band Together to Launch Successful Virtual Program: The Future of Events was scheduled to launch on August 22 in Amsterdam, but every event planner’s worst nightmare occurred when the organizers cancelled it a month beforehand. So a group of veteran event pros collaborated to provide the scheduled speakers with a new platform online. Read more at Trade Show News Network

Marriott Partners With TED Talks for In-Room, Social Media and Live Programming: TED will work with Marriott to curate content around the themes of “curiosity, innovation, travel, and entrepreneurship.” Guests can access the content during their stays via in-room entertainment when they log onto Wi-Fi, and Marriott-exclusive videos will also appear on Marriott’s social-media channels. Read more at Skift

Behind Orlando’s New IBM Watson-Powered Travel App: The app hasn’t been programmed yet to provide information about conference hotels or events venues, but it (mostly) offers much more relevant search results to common queries about casual group experiences. Read more at Skift