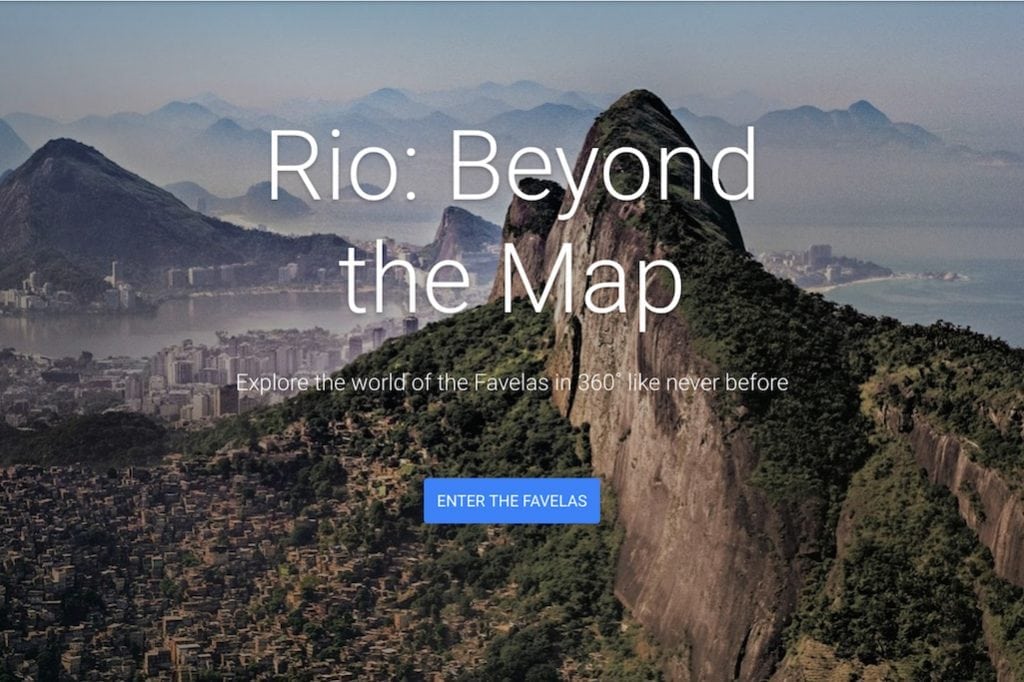 "Rio: Beyond The Map" is Google showing off what destinations can do with its Street View technology to provide an immersive and self-directed virtual experience, combining both 360-degree video and traditional digital content.

Google launched what could turn out to be a landmark 360-degree video platform last week called Rio: Beyond The Map to coincide with the opening of the Rio 2016 Summer Olympic Games.

The project is the result of an ongoing collaboration between Google and the local Grupo Cultural AfroReggae organization. Together they have spent the last two years in Rio de Janeiro mapping a couple dozen of the favelas using Google Street View technology.

The immersive videos in Rio: Beyond The Map confront the stereotypes surrounding the city’s infamous, impoverished favela neighborhoods by presenting stories of hope and inspiration. They’re designed to provide a more well-rounded, thoughtful, and positive perspective of these slum communities, which are typically associated with violent crime and crushing strife.

The series of 360-degree videos begin with the viewer riding on the back of a motorcycle as it races through a favela’s narrow streets for a slightly harrowing introduction into the claustrophobic maze of derelict buildings typical of these mountainside shantytowns.

As viewers proceed through each new stage of Rio: Beyond The View, they can click on video profiles of interesting people who are striving to improve themselves and their communities. These intimate character studies are the best part of the Google initiative.

Or, viewers can click on icons spread around the 360-degree viewing panorama to learn more about the history and culture of the particular neighborhood. Those icons link to content inside a larger Rio de Janeiro-dedicated Google Arts & Culture website with extensive archival content and online exhibits collected from a wide range of museums that collaborated with Google on this project.

The website also hosts 24 virtual Street View tours and thousands of photos of Rio’s museums and popular attractions. This could be the most comprehensive online overview of historical and cultural context of any travel destination packaged together in one digital platform.

At the beginning of the second section of Rio: Beyond The Map following the motorcycle ride, the viewer can choose to learn about a young woman named Paloma. She is black, female, and a resident of the Maré favela, which are three serious counts against someone eager to enter the popular computer science classes at Rio’s Federal University of Technology.

As we learn, Paloma succeeds in her quest to enter the university and become a programmer, with a particular interest in bringing artificial intelligence technology to her favela someday.

That’s a pretty lofty ambition for a child who grew up without a house address.

More than 1,000 favelas throughout Rio house 23 percent of the city’s 6.2 million population of Cariocas (local residents). Up until recently, all of the favelas appeared as blank gray areas in Google Maps, partly because many homes don’t have house numbers and many streets that don’t have street names.

“Mail doesn’t get delivered, correspondence neither,” says Paloma in her video profile. “It’s as if we didn’t exist.”

Up until a few years ago, most of Rio’s favelas were deemed too unsafe and too unimportant to warrant any effort to officially map the streets. However, life in the favelas has improved in recent years thanks to the Police Pacification Units (UPPs) storming the lairs of drug gangs and vice lords in preparation for the Rio Olympics.

The police raids and heavily armed presence are controversial due to innocent civilian casualties and the lack of success in some areas. There has also been a rise in crime in some communities this year due to budget cuts wrought by Brazil’s faltering economy.

But in those favelas where the UPPs have rid the streets of violent crime most successfully, such as Vidigal, Vila Canoas, and Rocinha, the growth of small family businesses and ongoing improvements in social services and infrastructure are driving new economic development.

With that new level of stabilization talking hold in the most pacified favelas, Google and Grupo Cultural AfroReggae have now mapped 26 favelas. Local entrepreneurs have also been encouraged to showcase their company information in Google My Business, which is integrated into Google Maps.

AfroReggae is choosing the local people who will be trained by Google staff to walk the streets of favelas wearing the Google Trekker 360-degree photo and map-making equipment. The NGO’s dedicated Tá no Mapa website is tracking the growing list of communities being mapped.

“We can bring visibility and enable these people to be part of the society as a whole,” says Jose Junior, founder of AfroReggae, in the above video.

According to Google’s blog: “1.4 million people have no addresses to list on job applications or bank accounts, and aren’t able to access many economic opportunities, essential services, even basic rights as citizens.”

After two years since the mapping project began, there are more than 10,000 local businesses throughout the 26 favelas now appearing on Google Maps that didn’t before.

There’s a significant market here for Google in the long term. One-and-a-half million people live in the favelas, and an estimated 85 percent of them have mobile phones with internet capability. But without access to Google Maps, that has hampered the ability for businesses to promote themselves, and for people to search and locate local businesses.

The Future of Favela Tourism

The new Google mapping will also assist the growing number of local favela tour operators, such as Favela Tour, Favela Experience, and Brazil Expedition, to help them better navigate the sometimes impenetrable shantytowns. These companies offer guided tours into the most gentrified favelas, but they’re drawing an increasing amount of controversy around their role in the rise of what critics call “slum tourism.”

Some Cariocas complain about what they perceive as “urban safaris and zoo tours” that exploit the suffering of local communities. Last year, Rio de Janeiro Councilman Celio Luparelli proposed that 21 favelas be designated as “Areas of Special Tourist Interest” so the government could better regulate and standardize tourism activity.

As reported in Viva Favela (link in Portuguese), Luparelli said, “There are foreign companies in the community without the slightest concern for the cultural, historical and artistic sites. [Tourists] go just to see the thing in a degrading way, to see poverty, to see doom, and leave without any interaction with the local culture.”

For a particularly egregious example of that, check out this video of a local jeep tour.

For a more independent favela travel experience, visitors can book Airbnb units in the Vidigal and Rocinha favelas, which are both located close to Rio’s popular Leblon beach community.

The Airbnb website describes Vidigal as such: “The neighborhood is notorious as the site of illicit activities, turf wars, and dense disenfranchisement. Awash in color and burgeoning with potential, exploring Vidigal is best suited for savvy travelers.”

Photo credit: Rio: Beyond The Map includes a series of 360-degree videos that introduce viewers to local residents trying to improve life in the favelas. Google