As Changi doubles its capacity to more than 135 million travelers during the next decade, it will become an even greater model for how to mass produce an iconic and superior passenger experience while treating each passenger like they actually matter.

In ancient times all roads led to Rome but in 2016 most roads — or flight paths — in Asia and beyond lead to Singapore’s Changi Airport, a Southeast Asian hub that will double its annual capacity in 10 years to more than 135 million travelers spread across two new terminals.

Changi has connections to 116 cities and 29 countries in Asia-Pacific and 320 cities in 70 countries overall. Any changes or improvements it makes touches a lot of passengers flying through the airport and region on one of 100 airlines with service to the airport. Changi’s passenger experience, which it’s won nearly 500 awards for, helped establish the entire Singapore brand, not just that of the airport.

As the airport puts final touches on its Terminal 4, set to open next year, it’s already begun planning for Changi East, a 2,700 acre expansion immediately east of the airport that will include a massive fifth terminal and an air facility both roughly the same size as all existing terminals. Changi East is scheduled to open in the late 2020s and will be connected to the other four terminals, effectively creating one super airport.

Skift toured Changi earlier this month on a trip to Singapore and learned why Changi Airport Group, the airport’s owner, decided to expand the airport rather than build another. For one, Singapore is tiny and smaller than New York City, for example, in terms of land area and population. For another, Changi officials told us how they looked at other large airport systems like New York’s and saw how disjointed they are in terms of passenger experience. The idea with Changi East is to expand and unify the passenger experience and help bring it to tens of millions of more people across Southeast Asia as Changi’s capacity soars during the next decade.

“While it will be our largest terminal to date, our principle of offering passengers an efficient, warm and engaging Changi experience, as they are familiar with at our current terminals, does not change,” said Choy Da Wen, senior vice president of the Changi East project. “In our design of the terminal, we will look at ways to achieve this effectively, such as modularized sections that do not require passengers to walk long distances as part of their airport passage, and seamless, efficient connections for getting from point to point.”

“In terms of facilities and ambience, we are excited about the myriad of possibilities…that this greenfield project brings us, and will definitely be looking at creative ways of how we can elevate the Changi experience further at this new terminal.”

Terminal 5 alone will have a capacity of 50 million passengers per year when its completed and will also include a third runway connected to the two existing runways.

Skift observed first-hand how the airport isn’t simply a place where Singaporeans go to travel. It’s also a meeting point and a destination for locals, a place to spend a weekend with family.

It has an outdoor butterfly garden and several other gardens, a 24-hour movie theater, multiple rent-by-the-hour hotels with the newest Yotel set to open in Terminal 4 and an outdoor rooftop swimming pool, to name just a few of its luxuries.

This video shows “Kinetic Rain,” a moving sculpture in Changi’s Terminal 1 departures hall spanning 810 square feet and containing more than 1,200 aluminum raindrops. The installation makes 16 different shapes in loops of 15 minutes. It was installed in 2012 and designed by German design firm Art+Com. It’s one of the main art installations at Changi and entertains passengers and the public before they even check-in for flights.

In case travelers didn’t try a certain dish while exploring the city, Terminal 3’s “Singapore Food Street” food stalls, pictured here, essentially serves every major dish that is a must-try in Singapore, where there are 12 national dishes. The entire airport contains about 160 restaurants and dining outlets. Wi-Fi is free, high-speed, and unlimited throughout the entire airport — and it actually works. There are also Wi-Fi kiosks like the one below and several information counters throughout the terminals where Wi-Fi access codes are distributed. Dozens of device charging stations are also located throughout. There are numerous interactive activities and games for children and adults throughout the terminals, like the Social Tree pictured below in Terminal 3. That terminal also has a three-story slide in its arrivals hall. There are dozens of feedback kiosks dotting the terminals where passengers can leave instant feedback for airport staff. There are also smaller kiosks located at cashier counters and other locations where passengers can push one of a handful of faces indicating a degree of service, such as excellent/happy or dissatisfied/angry. If any face was pushed that indicates poor service an airport staff member is immediately notified to check-out the situation. 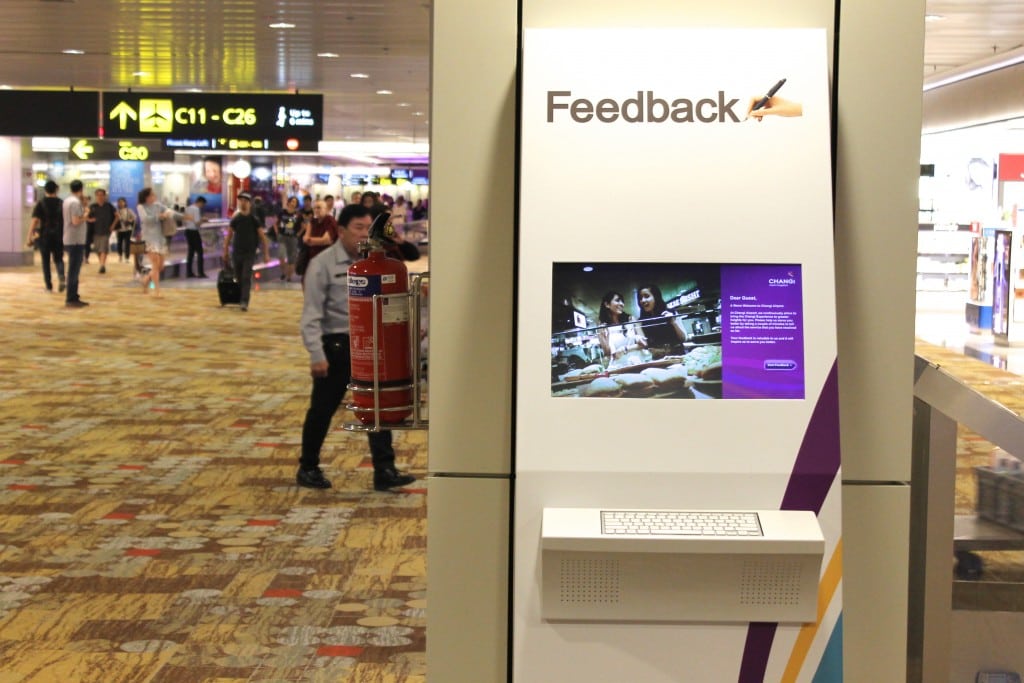 Passengers at Changi don’t go through security until they’re about to board their flights at their departure gates. Pictured here are passengers waiting to enter a gate area in Terminal 3 to go through a security checkpoint. After checking bags at Terminals 1, 2 or 3 passengers go through passport control and are then free to shop and explore. This is great for retail and spending at the airport, but Terminal 4 will both have centralized security checkpoints to better streamline operations and Changi’s studying security screening models for Terminal 5. Speaking of shopping, Changi has about 350 stores and retail outlets throughout its terminals. The terminals’ high ceilings give them a feel more akin to a shopping mall than an airport and make the terminals feel more spacious, in a good way. Photo credit: A rendering of the Changi East expansion of Singapore's Changi Airport, pictured in the foreground, depicting how it will be roughly the same size as the three existing terminals combined. Changi Airport Group