Formation Design’s blended cabin is part of a new trend of designers proposing that airlines think beyond tradition cabin class marketing. The notion of a lay-flat Premium Economy is exciting. If Henshaw feels measured optimism that airlines could take the next big leap forward—we’ll join him in that optimism. (We’ll still take tiny breaths until it happens, though. We wouldn’t want to pass out while we wait.) 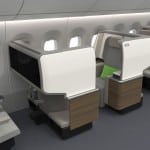 
As we move closer to a future of air travel where traditional cabin class labels lose all meaning, Formation Design is proposing a blended premium cabin which could introduce the world’s first lay-flight Premium Economy seats — occupying the same cabin area as private Business class suites.

The aircraft interiors space race has led to some curious proposals, but it has also fueled practical and viable creative innovations. Many of these are recognized as nominees in this year’s Crystal Cabin Awards.

We spoke with Robert Henshaw, Partner at Formation Design, about his blended lie-flat cabin which is among this year’s Crystal Cabin nominees. It reflects a trend to blend cabins according to passenger travel preferences, and add introduce more comfort to middle-market passengers who want more than an ordinary Economy experience, and perhaps less than traditional First or high-end Business class products.

The Formation lay-flat cabin consists of a variable number of seats—according to airline preference—with suites stacked slightly over the feet of the lay-flat seats on either side to better use the space. This 3D design technique has taken off among industry designers to better use space in the cabin as airlines try to fit more passengers in premium seats.

The position of the suite in Formation’s blended cabin is such that the overlap does not affect the other customers underneath, though. For them, the experience is similar to today’s lay-flat angled seats where the feet are tucked under storage cubby holes.

This type of blending resolves the problematic matter of 2D design without resorting to some of the more extreme 3D design solutions proposed on certain patents.

“Fundamentally, it’s about Improving the amount of usable space on the aircraft,” he says. “Really, we’re at a point where we look at so many 2D layouts and we’ve run out of room. The latest 2D arrangements have to do with fitting an 82-inch bed in a staggered arrangement, and you end up with a pointy place for your head to go and a pointy place for your feet. The LOPAS [seat lay-out configuration maps] are spent. If you’re going to fit all those passengers on a plane you’re going to hit a limit on what you can do from a 2D standpoint.”

The blended cabin can be configured in different ways, according to the airline’s preference and marketing strategy. It can feature standard Business class seats on the aisles and middle, with the option to book a private First class suite between them, or more dense configurations in the middle which could be better suited to a modern Premium Economy passenger experience — with a lay-flat bed — and the suite sold as a high-end Business class. “It ultimately comes down to how many seats you want to put onboard and how spacious the cabin,” Henshaw says. “Fundamentally, if you want, you can put these on a 777 and have only a business class, but with some suites. You can cut it different ways. A more pragmatic airline might have a business class cabin, with a 2-2-2 arrangement with a business suite.”

“A more luxurious airline, with a separate First cabin, might use the suite for Business class and say they have the first lie-flat Premium Economy cabin with a 2-4-2 arrangement. There are lots of different routes airlines could take, depending on how they want to segment the cabin.” Formation’s blended cabin may be a bit difficult to wrap one’s mind around initially— because it’s so very different from the highly structured and separate cabins airlines have flown for decades—but as Henshaw says the concept is no different from other travel experiences on the ground.

“In other industries, hotels, you often have suites and small standard hotel rooms in the same floor next to each other,” Henshaw says. “You see it on trains, with different classes of seats next to each other in the same car. I think it’s one of those things where an airline would need to find it acceptable. It would take a bit more of a risk-taker airline.”

While ‘risk-taker’ and ‘airline’ are two concepts which don’t immediately seem to fit together, Henshaw argues that today’s travel experience already benefits from bold design leaps by innovative airlines which are otherwise known for a conservative approach to business.

Today, lay-flat business class and first class seats are a given. But only twenty years ago, they were entirely inconceivable. That’s until British Airways decided to make getting a good night’s sleep onboard a core element of its brand differentiation strategy.

“There were a lot of people who went ‘wow’ but they were ultimately proven right,” Henshaw says.

Henshaw suggests that—as the front of the plane has become increasingly luxurious—cabin class labels have somewhat lost their meaning.

It’s true that today, what one airline labels as First class might feel like an inferior Business class on another.

But Henshaw also believes all the build up at the front creates an opportunity to upgrade the experience for more passengers—by offering blended options.

Another benefit of a blended cabin is that it gives Western airlines a viable product solution to compete with luxury competitors.

“We’ve seen with the Middle Eastern carriers really blowing out the notion of the First class cabin in the last few years. I do think that we’re at a point where a lot of the Western airlines are more socialist than people realize,” Henshaw says. They don’t fly a lot of billionaires around. By and large, most people that are people onboard are on a corporate account.”

Henshaw acknowledges that part of that democratised airline passenger profile in the West is also because of the significantly larger fleet of privately and fractionally owned business jets. Billionaires in the West do fly in extreme luxury, though in the West most of them don’t fly commercial.

What the ultra-wealthy do, though, doesn’t really matter to Western commercial airlines, Henshaw suggests. They still need to maintain a healthy bottom line from catering to the needs of leisure and corporate flyers alike–and that takes creativity.

“I do think there’s a lot of innovation that’s yet to happen in that space, with the lie-flat cabin,” he says. “I think the exploration is more the vertical space, essentially looking at the future as the next evolution of comfort. It’s very expensive real estate flying around and you want to get as much use out of it as you can.”

With airlines watching costs more closely, and working to increase profit margins, we asked Henshaw how optimistic he is that the next British Airways will come along to pick up a version of Formation design’s blended cabin concept soon.

“I’m very optimistic. We’ve been looking–for years–at the next level of efficiency and initial design in the cabin. We’ve got a filing going back to 2008, so it has been very slow in coming about, but I’m very bullish on the innovation that will be coming out in next few years,” he says.

Henshaw adds. “There has been a precedent of airlines reinventing themselves with new and innovative design. There’s more opportunity for that.”

Through ups and downs, leaps forward and delays, Henshaw still loves designing for the airline industry. As he tells us, “For me it’s fun. It’s an ideal thing.”