Paul English of Lola Travel wants to address some of the shortcomings, including the lack of human intervention in trip-planning, that were never addressed during his tenure at digital-only Kayak. Perhaps Kayak's new text-based travel service will fill some gaps -- if they really exist, that is -- as well.

Oh snap: Kayak is apparently looking to get a little less digital.

In the wake of Kayak co-founder Paul English and several other former Kayakers getting ready to launch the Lola Travel app, replete with heavy involvement from flesh and blood travel agents, Kayak is signing up consumers for Kayak Snap, described as a text-based travel service.

“Be informed as soon as our SMS-based travel service is available,” Kayak states on an email sign-up page. 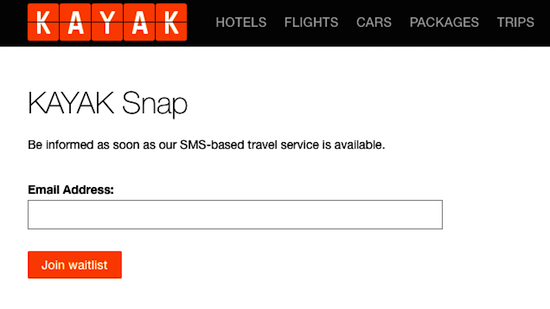 Kayak CEO Steve Hafner says the company has launched a beta of the service among “a small group of Kayak power users.”

“We are always experimenting with new ways to make travel planning easier,” Hafner says. “Given how much time people are spending on SMS-based platforms, this is an interesting area for us to explore.”

“Requests,” Hafner says, “are being handled by Kayak engineers for now. It will be a combination of AI (artificial intelligence), humans and of course Kayak’s engine, so we don’t anticipate hiring armies of travel agents.”

What kind of requests? “Travelers’ questions,” a Kayak spokesperson says. The artificial intelligence aspect of the service does not come from WayBlazer and its chairman Terry Jones, who was Kayak’s first chairman, but was built in-house at Kayak, the spokesperson adds.

Asked about any similarities with Lola Travel, Hafner says: “We have tremendous respect for Paul English and his team. While I don’t see Kayak hiring travel agents, maybe we can learn from each other’s different approaches.”

When English of Lola Travel revealed plans to launch a new travel startup several months ago he said Lola would address some of the shortcomings that were never focused on at Kayak. English later described those shortcomings as the lack of human/travel agent intervention in the travel planning and booking process.

Perhaps Kayak, with its new text-based travel service, is finally getting around to adding a bit of human touch to its online search and bookings service.

Photo credit: Kayak may sort out some of the confusions consumers feel at airports and in doing trip-planning with a new text-based travel service handled by real people. Kayak